The Twentieth Century: Destruction and Renewal 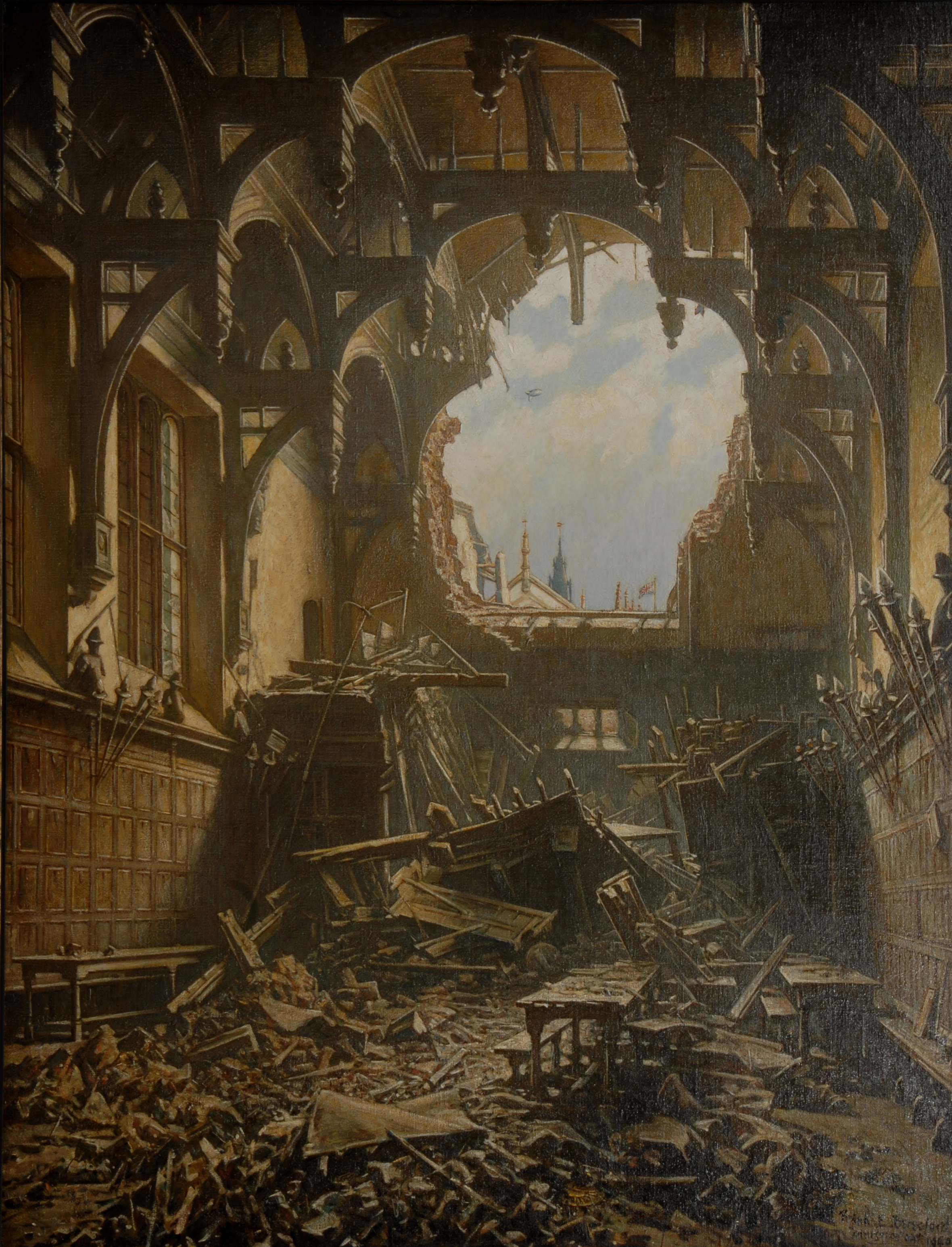 The twentieth century began with the death of Queen Victoria in 1901, and her succession on the throne by her son, King Edward VII, the Middle Temple's Royal Bencher since 1861. He maintained his connection with the Inn, attending events including the Grand Day dinner in 1903. The early years of the century also saw the replacement in 1912 of the long serving Under Treasurer, James Waldron, by Major General Henry Beresford-Pierce. Beresford-Pierce found the Inn in some organisational disarray – chaos in the office and the kitchens, and a habitually drunk Head Porter – but soon set about restoring the Inn’s management to ship-shape efficiency.

In 1914, the First World War began, and over the course of that conflict at least 78 members of the Inn were killed, as well as a number of members of staff and of the Temple Church choir. The fabric of the Inn itself sustained damage when two anti-aircraft shells came through the roof of what is now the Queen’s Room, lodging themselves beneath the floorboards – an incident marked today by two plaques in the carpet. After the War, many veterans of the fighting were given dispensations from the usual rules – one student member was even allowed to sit his Bar Finals in Salonika.

Another longer-term consequence of the War was the admission of women to the Inns of Court as part of a far wider opening-up of the professions to women, which was enshrined in the Sex Disqualification (Removal) Act passed in Parliament in 1919. The first woman to be admitted to any Inn was Helena Florence Normanton, admitted to the Middle Temple on Christmas Eve in that year, the day after the Act was granted Royal Assent by King George V. Normanton was also the first woman to practice at the English Bar, following her Call in 1922, and of the first two female Silks.

A prominent figure in Middle Temple life in the Inter-War years was Harold Harmsworth, 1st Viscount Rothermere. The son of Alfred Harmsworth, a Middle Templar and undistinguished Victorian barrister, he had risen to prominence and immense wealth as a newspaper proprietor, and became an affectionate and generous benefactor of the Inn. He provided extensive sums of money to fund Scholarships – which are still awarded to this day – as well as a relief fund, and an astonishing collection of valuable and exceptional silver. One of his last acts of kindness to the Society was the donation of money shortly after the outbreak of the Second World War in support of the Inn and its members. He died in 1940.

The political climate of the 1930s made war a very real possibility, and preparations for the upcoming conflict began at the Middle Temple in 1937. Air raid shelters were constructed in carefully identified basements, and Air Raid Precaution training was provided to staff and members. The Inn’s Librarian, H.A.C. Sturgess, specialised in providing training in first aid and gas attacks, and a first aid squad was formed of barristers’ clerks. Many of the Inn’s archival records, including the 1608 charter from James I, were sent away for safety, followed by the royal portraits and stained glass windows from Hall.

The first bombs fell on the Temple on 24 September 1940, destroying part of Elm Court, and destruction would continue throughout the Blitz until the final night of air raids in May 1941. In October 1940, another attack on Elm Court caused an explosion which ripped a hole in the East gable of the Hall, destroying the wall and smashing the minstrels’ gallery and screen to smithereens. The Victorian Library was severely damaged by more than one raid, eventually proving beyond the point of salvation, and the Temple Church was devastated. Further damage was done later in the War, when the roof of the Hall very nearly succumbed to an incendiary attack, but was mercifully saved by the firefighting efforts overseen by the Inn’s fireman, Mr Collison.

Amidst these later attacks, a more hopeful occasion took place – on the night of 12 December 1944, Queen Elizabeth, later the Queen Mother, was admitted and Called as a Royal Bencher. In her speech that evening, she called her fellow Benchers’ minds back to Queen Elizabeth I, so well-associated with the Hall, and looked forward to a brighter future, declaring that ‘your Courts and Chambers will rise with a greater strength and a new beauty’. She would maintain a strong connection with the Inn in the years to come and for the rest of her long life.

After the destruction of the  War, a vast reconstruction effort was called for. Master Kenneth Carpmael oversaw and advocated for the project, and the chief architect was Edward Maufe, responsible for such great works as Guildford Cathedral. The Hall was restored by 1949, and was formally opened by the Queen in July of that year, coinciding with her Treasurership of the Inn. The Temple’s rebirth continued throughout the 1950s, and new chambers buildings were constructed, including the Queen Elizabeth Building which sits on the site of the old Victorian Library. It saw the restoration of Temple Church (including a new organ) and the construction of a new Library, today known as the Ashley building. Throughout this period, the Queen took active interest in the work, paying private and unpublicised visits to meet the workmen involved.

Aside from the great restoration efforts of the mid-century, the Inn grew and developed as the twentieth century went on. Further provision of scholarships and other support was instituted, and the Society continued to provide the collegiate ethos and support it long had to students and barristers. The old practice of eating dinners to qualify for the Bar gave way to qualifying sessions, which had a more explicitly educational focus. The Advocacy programme was introduced under Michael Sherrard, and other changes to the wider educational picture came with the establishment of separate Bar courses around the country beyond the Inns of Court School of Law. As the Bar itself grew, further space was acquired to house chambers, including on nearby Essex Street and Fleet Street.

The social life of the Inn rebounded from the privations of the post-war years. The Reader’s Feasts had been reinstated in the earlier part of the century following their long period in abeyance, and more student activities and entertainments were introduced, including Revels and the Inns of Court Balls. The Queen Mother continued to dine at the Inn on a regular basis, often at the Family Dinners, and attended other events such as Midsummer Balls, Garden Parties and a performance by the Rambert Dance company. Her last visit to the Inn took place in December 2001, just a few months before her death at the age of 101.