November 2019: Defending Inn and Country: Military at the Middle Temple

In the present day there is a sharp distinction between military and civilian life. If barristers serve in the armed forces, they will probably do so as a specialist in a capacity that takes advantage of their professional training. This was not the case prior to the 20 th century. In times of conflict, men of the Middle Temple and the other Inns of Court banded together and volunteered to act as foot soldiers in the eventuality of invasion by enemy forces.

In 1584, the Inns of Court formed an association, otherwise known as a ‘trained band’, to defend the country against the looming Spanish invasion. Trained bands in the country this time were primarily drawn from the class of men whom could afford the cost of the equipment – well-to-do householders, artisans, farmers, landowners, yeomen, or their sons. They would meet for training only a few days every year and were formally mustered either once or twice a year, or every three years depending on the perceived danger of invasion. In contrast to the majority of the militia in England, the Inns of Court only appear to have contributed to the military during times of national crisis. On 10 March 1616/17, during the build up to the Thirty Years War, King James I sent instructions by letter to Sir Francis Bacon, the Attorney General, to make his wishes known to the Benchers of the Inns of Court and Chancery. He requested that two companies, consisting of six hundred men, volunteer themselves for service. A separate document provides further stipulations concerning the organisation of the proposed military force. Unfortunately for the King, the Minutes of Parliament of 27 June 1617 record that the Benchers of the Middle Temple decided that there ‘is no willingness nor ability to perform the contents of these letters’. 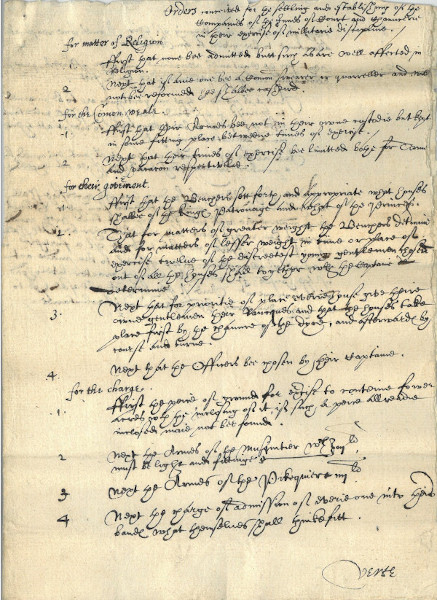 Orders regarding the establishment of the companies of the Inns of Court and Chancery for exercising military discipline, c.1617 (MT/1/JAS/2)

An interesting remnant in the Inn dating from prior to the Civil War (1642-1651) are the matchlock muskets that can be seen on display near the Benchers’ entrance. A receipt dated July 1642, ‘for new stocks and locks and for other cleaning of eighteen old musket barrels’ indicates that there were probably only a small number of muskets owned by the Inn at the outbreak of the war. External source material indicates that members of the Inn fought on both the Parliamentarian and Royalist sides, but they would have provided their own equipment. One possibility is that the Society’s armour and weaponry was provided for the use of its servants. As well as refurbishing their old muskets, the Inn purchased seventeen pounds of gunpowder, a barrel to store it, two and a quarter pounds of match and sixty pounds worth of bullets. A joiner’s bill dated 1642 indicates that the muskets and armour may have been moved to the Lower Parliament Chamber at this time, as the joiner was commissioned to make racking for the muskets and a cupboard for the armour in that room.

The next national crisis that caused the Inns to raise arms was the Jacobite Rising of 1745. This was an attempt by Charles Stuart, the exiled grandson of the Stuart monarch King James II, to usurp the throne from the Hanoverian King George II. Chief Justice Sir John Willes raised a regiment from the Inns ‘for the defence of the Royal Family in such a manner as His Majesty shall think proper within the Cities of London and Westminster’. A list records the names of all the men of the Inns of Court that joined this regiment. It is unlikely that these men engaged in combat during this conflict, as the rebellion never laid siege to London and retreated north after reaching Derby. 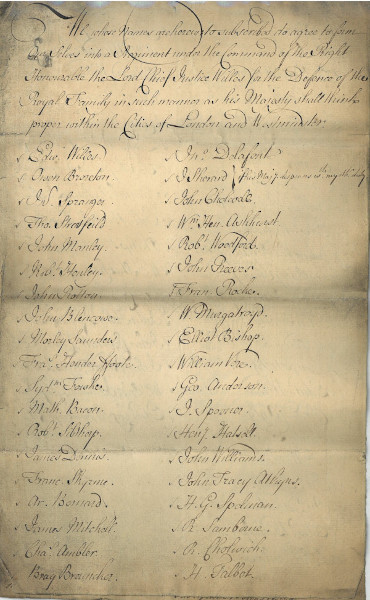 List of gentlemen who formed a regiment during the Jacobite Rising, 1745 (MT/17/REG/1)

The next conflict, the Gordon Riots of 1780, proved to be far from uneventful for members of the Inn. The Temples were directly targeted by rioters, whom had initially taken to the streets in protest of the Commons’ refusal to repeal the Catholic Relief Bill of 1778. This bill had been passed with the intent to improve the rights of Catholics in Britain. Hundreds of buildings were ransacked and members of the Temples were forced by circumstance to come to the aid of the militia that were defending them. Contemporary newspapers reported on the actions of the barristers and students of the Middle Temple and the Inner Temple. An article from The Morning Chronicle and London Advertiser , 13 June 1780, details the violent events:

‘The Spirit and activity which the Templars shewed on Wednesday evening, saved their buildings from the flames, and obliged the ruffians to quit their gates at the instant that they had battered them to pieces. They have now a regular defence, consisting of 300 gentlemen, who are divided into Companies under seven barristers, who they appointed their leaders. They are all armed with bayonets, and four of each Company patrole the Temple the whole night.’

This new Association did not disband immediately after the riots were quelled as Lord Loughborough, the former Attorney General, reputedly informed the barristers ‘the necessity was never stronger for your supporting your present military appearance . . . the spirit of tumult is as strongly, and as dangerously, though more latently in operation at present, than it was at the commencement of this melancholy business’. In accordance to Lord Loughborough’s wishes, the Temples formed themselves into a regular corps. The date on which the 1780 Temple Volunteers disbanded themselves is unclear, but they had clearly done so prior to 1798.

In 1795, during the French Revolutionary Wars, one of the methods by which the Inn aided in the defence of the country was by recruiting men for the army and navy. In addition to opening up the Treasury as a recruiting office, the Inn paid a portion of money to individuals who furnished them with men and contributed towards substantial bounties paid to the recruited men. A receipt dated 26 December 1796 shows that in that year the Middle Temple recruited five volunteers to the army and contributed towards the bounties given to the men for enlisting. 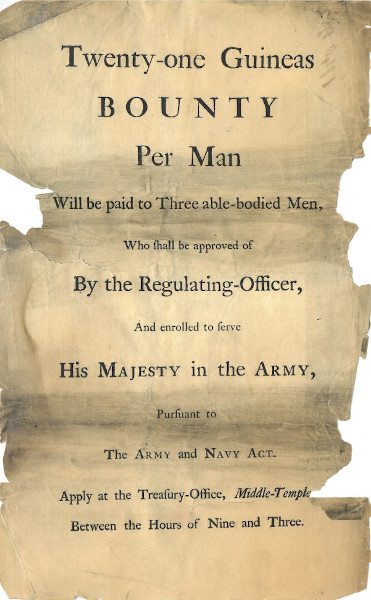 Notice soliciting applications to enrol into the army during the French Revolutionary Wars, 1797 (MT/17/REG/2)

As well as contributing towards the defence of the nation as a whole, members of the Temples formulated a plan for the defence of London in the eventuality of invasion by the French. A meeting was held on 7 April 1798 nearby at George’s Coffee House, and a committee of seven was appointed. This committee oversaw the creation of a plan to form a defence association, chaired by the Inner Temple Treasurer, Sir Robert Graham, to serve in a military capacity at their own expense. This plan was laid by Graham before King George III, who commanded him ‘to express to the committee the satisfaction which His Majesty has received from this proof of the zeal and loyalty of the members and inhabitants of the Inner and Middle Temples’. The association became known as The Temple Association Volunteers and fielded three companies, about three hundred men. It was active until 1802, when it was combined with the Lincoln’s Inn Association to form the Law Association Volunteers (1803-1808), which was granted the nickname ‘The Devil’s Own’. 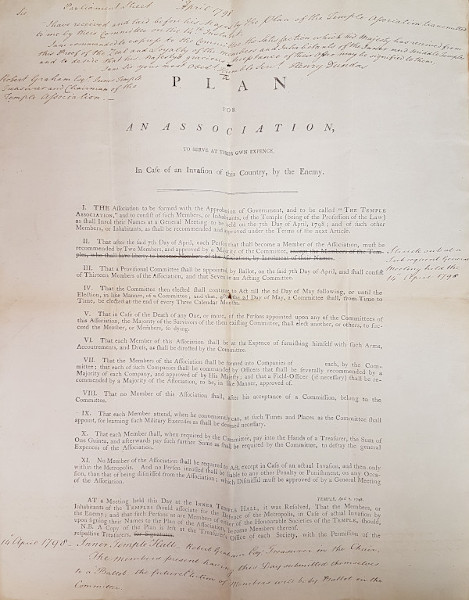 ‘Plan for an Association to serve at their own expense in case of an invasion of this country by the enemy’, 1798 (MT/17/REG/4)

A French invasion was again feared in 1858, and in November 1859 the Inns of Court Rifle Volunteer Corps was formed. This consisted of an entire battalion of around six hundred men. Recruitment was confined to the Bench, the Bar and to students of the four Inns. The 19 th century barrister L.D Powles reminisces in his manuscript memoirs about the formation of the Corps, stating ‘Barristers and students of any of the Inns of Court were eligible for membership, pretty nearly all the able-bodied men at the bar enlisted, and every afternoon Queen’s Counsel and others in large practise and well advanced in middle life were to be seen drilling in Lincoln’s Inn or Temple Gardens’. He goes on to describe participating in autumn manoeuvres with the Devil’s Own in 1871-1873 in great detail. Powles’ excitement at his first ‘campaign’ is evident in his account of the 1871 manoeuvres, but in later years the shine appeared to have worn off – In 1872, he recalls a long, hot summer with water shortages and being unable to wash for days at a time, as well as dysentery being widespread among the men. 1873 was an extremely wet summer, and he writes about sleeping in mud, marching through the driving rain and not being dry until the last two to three days of over two weeks of manoeuvres. 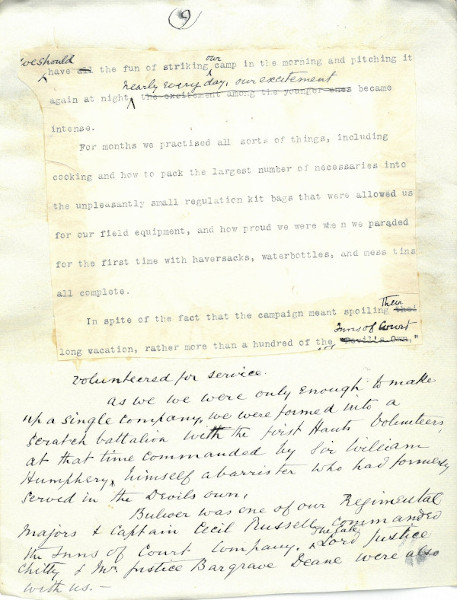 Page of the memoirs of L.D. Powles regarding his experience with the Inns of Court Rifle Volunteer Corps, c.1908 (GD/2)

In the 1880s the number of men in the battalion dropped due to the retirement of the older members, the reduced popularity of volunteering, and the restricted field of recruitment. In spite of great recruiting efforts, the Corps was reduced further in 1893 and was attached to the 4 th Middlesex RV. In a report of a Special Committee dated 11 March 1895, it was recommended that membership of the Corps be opened up to past and present members of the universities and Public Schools, as well as other gentlemen that could be considered ‘especially eligible’, including solicitors. The Corps was seen as a valuable means of banding together members of a similar social status who did not want the responsibility of officers, but ‘would willingly join a regiment where they would find in the ranks their old schoolfellows and college friends, instead of the rank and file drawn from a different social position to themselves’. 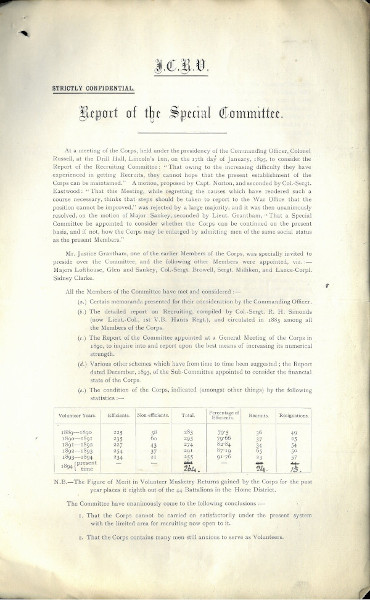 Report of a Special Committee regarding the Inns of Court Rifle Volunteer Corps, 11 March 1895 (MT/21/1/XXXIV/IV/7)

In the absence of warfare, the Rifle Volunteers had time to put on entertainments for the Inns. ‘Smoking concerts’ were performed in Middle Temple and, according to Powles, in Inner Temple. They may have been performed at the other two Inns as well. Smoking concerts were informal amateur concerts that gained popularity in the Victorian period. They were open to men only, who were allowed to smoke, drink and talk during the performance. One notable smoking concert at Middle Temple Hall was performed by the Rifle Corps on 21 December 1896 and was distinguished by the presence of H.R.H. Albert, Prince of Wales. 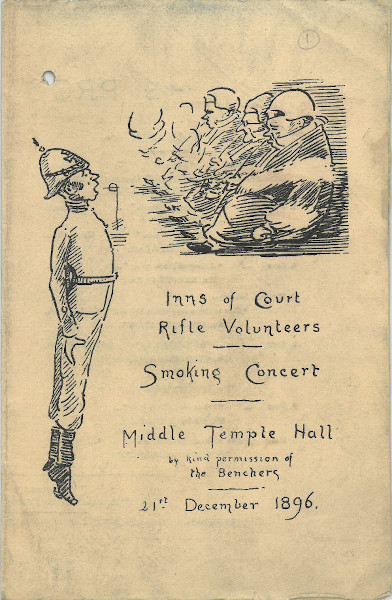 Many years of peace for the Inns of Court Rifle Volunteers came to an end in 1899 with the outbreak of the South African War, also known as the Boer War. The regiment was deployed on active duty during that conflict and its successors made important contributions during the First World War and Second World War. Its current incarnation is the 68 (Inns of Court & City Yeomanry) Signal Squadron, which provides important support to emergency services and local government when military aid is required, as well as to the regular army operations abroad.