March 2020: A Brief History of Archives and Recordkeeping at the Middle Temple

The history of the Middle Temple is an integral part of its identity. Our only knowledge of it would derive from oral tradition and myth were it not for the survival of the Inn’s historic records and the hard work of over a century of enthusiasts, historians, and library and records professionals in preserving them and making them accessible. The work of these individuals rescued the Inn’s records from obscurity and as a result, the Middle Temple can boast the largest and most complete archive of any of the four Inns of Court.

The papers in in the Middle Temple Archive span five centuries and comprise primarily of the administrative records of the Inn. The earliest surviving records are the Minutes of Parliament, which begin in 1501 and continue to be produced to the present day. It is evident from the first entry in the minutes, written on 7 July 1501, that there were earlier records kept by the Society, but these have long since been lost to history. Translated from the original Latin, the entry reads ‘‘William Bollyng, the last Treasurer, delivered to the same John [Brooke] the Book of the Constitution of the [Middle Temple], with the rolls’. The careful transfer of stewardship of the records from one Treasurer to another would have been very important. All of the early records of the Inn were meticulously handwritten and the majority of them were the only copies in existence. These documents contained the sole evidence of the rights, obligations, and precedents of the Middle Temple and the loss of these could have led to severe legal and financial repercussions for the Society.

The Minutes of Parliament are the Inn’s oldest records, but they are unfortunately incomplete. One of the minute books, containing entries dating from 1524-1551, encompassing the period of the Reformation, has been lost. The orders and activities within this period, therefore, remain a mystery. The only tantalising remainder of this wayward book can be found in later minutes of Parliament of 25 April 1634, which references an order of seven days after St John the Baptist’s day 1530, relating to the rules around gentlemen in chambers and the keeping of Commons. It is evident that this minute book disappeared between 1634 and 1717 – by the later date it is absent from inventories - and may have been a casualty of the period in which the nation experienced the profound upheaval of the English Civil War, Great Plague and Great Fire of London. This loss happened despite precautions taken by the Society - in 1646 Parliament ordered that ‘a large iron chest shall be hearkened after, looked out, and if to be had, provided to lock up plate and evidences, and money also if there be cause’. ‘Evidences’ in this case referred to the records of the Inn, and their inclusion in an iron chest with money and silver plate demonstrates how valuable they were considered to be. 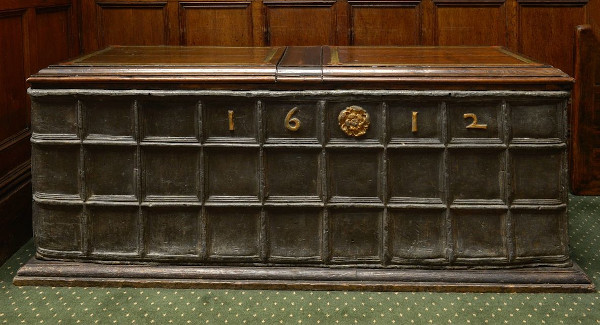 A lead cistern converted into a chest with a later wooden lid made from a remnant of Temple Bridge, c.1612

The earliest official inventory of the Middle Temple’s records was written in 1717. This included only the records most important to the administration of the Society, such as the minute books, property deeds, admission records to the Inn and chambers, Treasurers’ receipt books, the financial bonds of members, and records of coats of arms. The impetus for the creation of the inventory was employment of a new Under Treasurer, Isaac Jackson, who subsequently signed the inventory to acknowledge his responsibility for the care of the books and papers belonging to the Inn, as well as its silver plate and linens. Several more of these inventories exist – one from 1728 created on the employment of Richard Bruncker as Under Treasurer, and one in 1747 created on the employment of John Kirby as his successor. The records over which they were granted stewardship remained within the Treasury Office until the early 20 th century, despite falling out of common use. 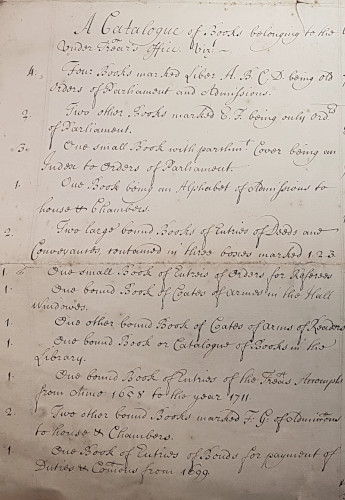 Extract from an inventory of records, plate and linens of the Middle Temple, 1717 (MT/11/INP/1)

These early inventories list only a small proportion of papers produced by the Middle Temple detailing several centuries of its day-to-day minutiae. A large part of the collection consists of bundles of loose papers – usually relating to the administration of members, staff and chambers - containing items that were seen as less important to the Society than its minutes, deeds, receipts and bonds. For many years these were neglected in the same manner as the majority of historic records in Britain. Until the 20 th century, they were boxed up, forgotten, and left in the clock tower of Middle Temple Hall. No-one knew the full extent of the material and its contents, and sheer quantity of unsorted and uncatalogued material rendered the documents almost completely impenetrable. 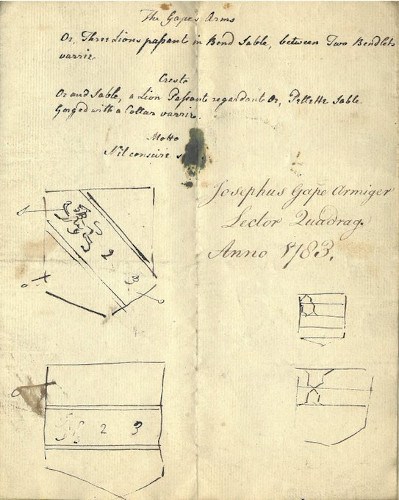 Work first began on making the Society’s historic records accessible in 1898 under the auspices of the Records Committee, which was placed under the superintendence of Master Hopwood. Although the documents themselves remained in their historic accommodations, the Committee commissioned a translation and transcription of the Minutes of Parliament as this was the Inn’s most important and long-standing series of administrative records. This series of three volumes, published in 1904-1905, encompassed the minutes from 1501-1703, and facilitated widespread access to the Middle Temple’s early records for the first time in its history. 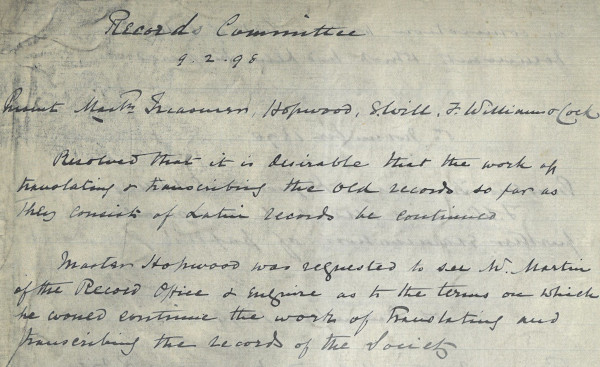 After many years of being trapped in administrative purgatory, responsibility for the historic records of the Inn was transferred to the Library in 1925. The records themselves were moved to the Muniment Room in the old Library building, which overlooked the garden. Master Bruce Williamson, who produced many publications on the history and historic collections of the Middle Temple, was instrumental in this process. A speech made by the Treasurer on the presentation of a wedding gift to Master Williamson in 1931 recalls ‘He found our original records dating from 1500 in unspeakable confusion in a dark room in the basement. He sorted them out and then cleaned and got them removed to the Muniment Room in the Library’ – the reference to a ‘dark room in the basement’ is hyperbole in this case, as they had been stored in the clock tower of the Hall. Once the records had been moved, work began on cataloguing and conserving the collection under of the direction of Mr Sturgess, the Librarian and newly minted Keeper of the Records. 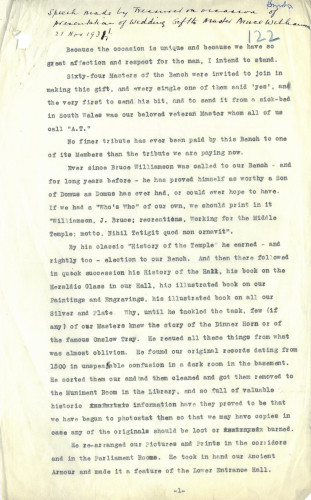 Speech given by the Treasurer on the presentation of a wedding gift to Master Bruce Williamson, 21 November 1931 (MT/3/BEM/11)

Another significant step in improving the accessibility of the Middle Temple’s records was the publication of Registers of Admissions. The enormous task of compiling dates of admission and Calls to the Bar for every member of the Society dating back to 1501 was begun by Mr Bedwell, the Librarian, in 1915. When the project was started it was hoped that the manuscript would be finished in the space of a year, but the project was abandoned due to staff shortages during World War One. Bedwell’s successor, Mr Sturgess, was called on to complete work on the Admissions Registers in 1931. Owing to the pressures of his Librarian duties, Sturgess was not able to complete the Admission Registers until 1938 and their publication was delayed due to the outbreak of World War Two. Despite ostensibly being completed, work on the registers resumed in 1949. Sturgess was put under tremendous pressure to add further membership information up until the year 1944, so as to include the record of Queen Elizabeth, The Queen Mother. He worked until midnight for three months in order to complete the manuscript and the published registers were presented to Her Majesty just prior to the end of her Treasurership in 1949. 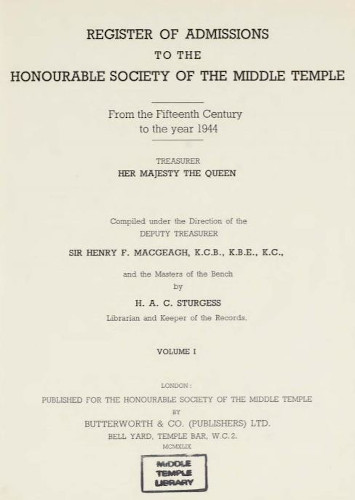 Middle Temple’s Register of Admissions by H.A.C. Sturgess, Librarian and Keeper of the Records, 1949

The old Library had been devastated during the Blitz and was rendered completely unusable. After the new Library (now the Ashley Building) was opened by Queen Elizabeth, The Queen Mother in 1958, the Archive was moved to the new Muniment Room in the basement. For many years, sorting and cataloguing of the collection was undertaken by Mrs Barbara Given, an archivist of the British Records Association who was contracted on a very limited basis for this purpose from 1963. By 1989 the importance of the Middle Temple’s Archive, as the largest and most complete of any of those of the four Inns of Court, had been recognised in a report of the Historic Manuscripts Commission. In response to this report the Inn’s first full-time Archivist was employed in 1990 to oversee the arrangement and cataloguing of the Archive under the management of the Janet Edgell, the Librarian and Keeper of the Records. 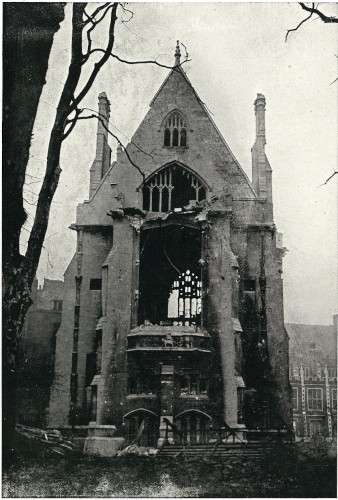 Photograph of the damage inflicted on the old Library during the Blitz, c.1940

By 2000 the needs of the Archive had become specialised and divergent from those of the Library. It was decided that the Archive would no longer fall under the responsibility of the Library and a new, separate Archive Department was created. The Archive continued to expand and develop over the next few years, and in 2007 an archive repository, offices, reading room, and specialist conservation studio were opened on the 4 th floor of the Ashley Building. The historic records of the Inn are currently housed in the optimal conditions for their long-term preservation, and professional Archive staff continue to work to ensure that the Middle Temple’s rich history remains an accessible resource to inform and inspire the Inn’s members and staff. 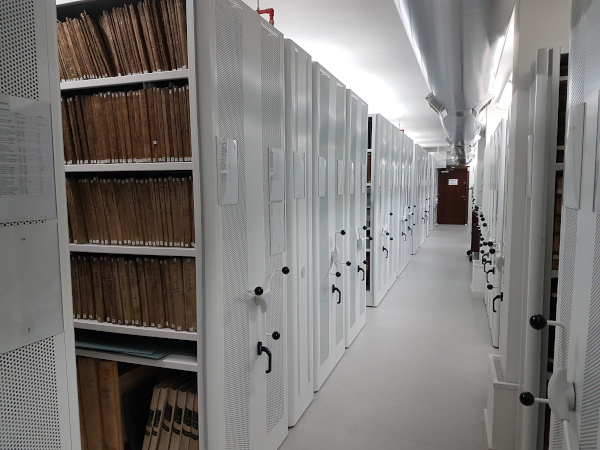 Repository of the Middle Temple Archive, 2020