September 2017: Food and Dining at the Inn

This month, we're taking a look at the important role food has played at the Inn throughout its history. Concerns over its supply, quality and cost have arisen time and again over the centuries, occupying the attention of barristers, Benchers and staff, and dinners have of course marked some of the Inn's most important occasions. Dining has for a long time formed a key element of the Inn's educational programme - keeping 'commons' was for a long time a crucial qualification for a student's Call to the Bar, and the Inn's fine food is still shared and enjoyed at many qualifying sessions.

The age-old office of Reader has always been associated with dining on a grand scale. As well as lecturing Middle Templars on matters of statute law, the Reader was also required to lay on the accompanying feasts at his personal expense. As the Inn grew in size, this became such a burden that Readers began to pay a fine of £200 in order to dispense with the whole matter. On the Reader's 'venison day', certain servants and officers were entitled to venison pasties, but this became a cause of considerable confusion in 1756. Such were the 'disputes and quarrels' over which among them were entitled to ten pasties that the Officers of the Inn submitted a petition to the Bench, explaining the confusion, noting that among other issues 'the wash pot thinks he has a Right to have the third Pastie' and that 'on the last Venison day we had not sufficient at the Buttery Table for our dinners'. 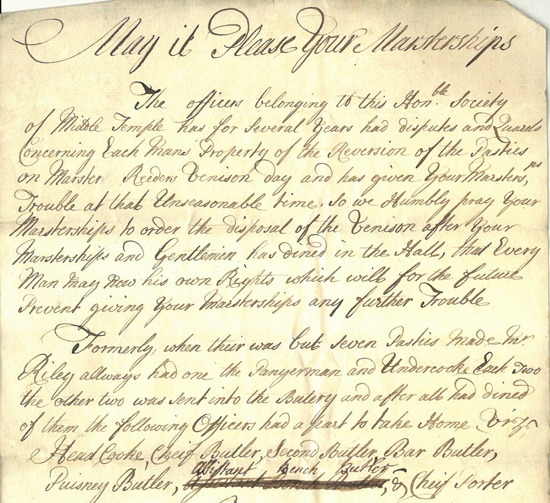 Petition of various Servants for the matter of the pasties to be settled, 1756

In 1761, the Reader’s Feast illustrated well the divide between those dining at the bench Table and those dining ‘Below the Bench’. The Cook’s proposed dinner saw Westmorland Hams, chickens, puddings, soup, jellies and fish being ordered in considerable quantities for the Bench, while those below were provided simply with ham, ‘fowles’, orange puddings, greens, carrots and turnips. 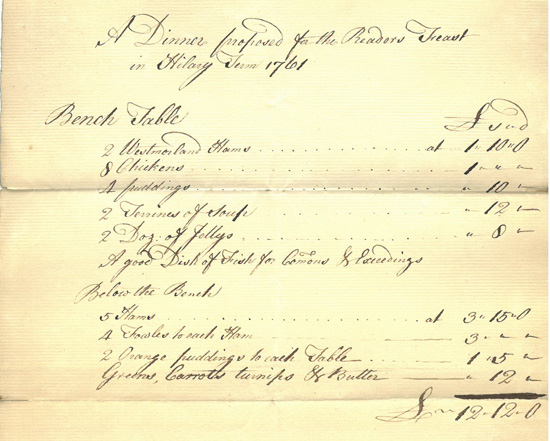 The Inn's Parliament has long been well catered for. The Archive holds bills for Parliament Suppers, which list gurnard, pippins, sugar and spice, artichokes, sole, capons, buttered eggs, breast of mutton and strong beer among the refreshments enjoyed at these events. 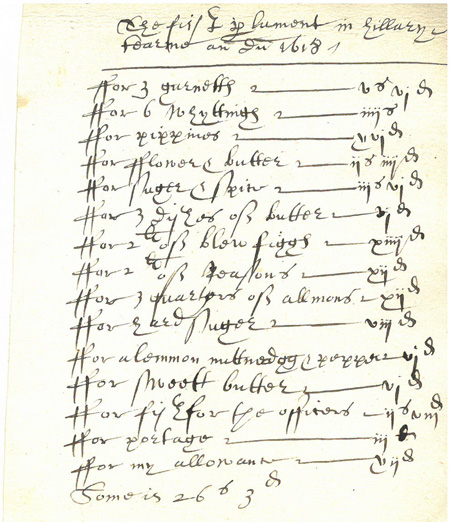 As early as the 17 th century, food was causing controversy at the Inn. June’s Archive of the Month looked at Charles I’s 1631 complaint about the eating of meat during Lent, and in the same decade a committee was appointed by Parliament to investigate the high cost of Commons at the Inn. They produced a report laying out a seventeen-point conclusion, which included advised requirements concerning the delivery of beef by weight, ensuring the beer was tilted when being poured, and that eight eggs between four men be served on a Saturday night, at one half-penny apiece. 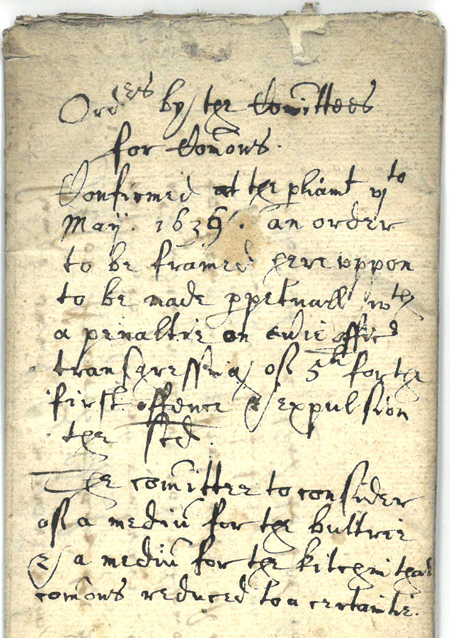 Front page of the report of the Committee on Commons, 1636

In the late 18 th century, one William Fidoe served as Chief Cook for a number of years, and many of his records survive. His scheme for Commons for a year paints a vivid and detailed picture of how the regular members dined at the Inn. For example, Fridays in Michaelmas Term featured ‘Oysters Fresh Fish, proper Sauce, Loin of Mutton pickles & Horse Radish’, on a Tuesday in Easter term, ‘Neck of Veal, One hundred Asparagus’ would be served, and on Saturdays in Trinity Term the gentlemen could look forward to ‘Leg of Lamb & Collyflower, Strawberrys & Cream’. 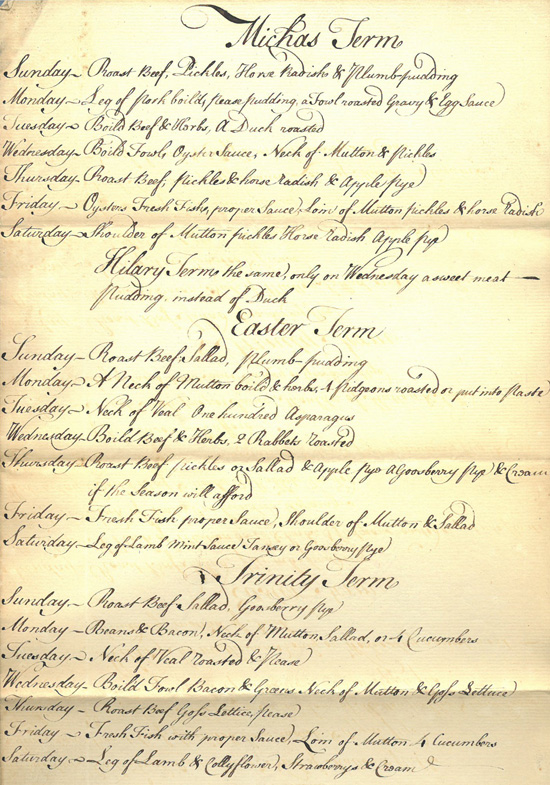 Fidoe’s accounts also indicate the range of suppliers the Inn used for its food and drink. Supplies came from Castle the Butcher, Birks the Poulterer, Crockford the Fishmonger, Falkner the Baker, Hodgson ‘for butter & cheese’, Bunn ‘for Green sallads &c’ and Hands for Oil & Vinegar, among others. 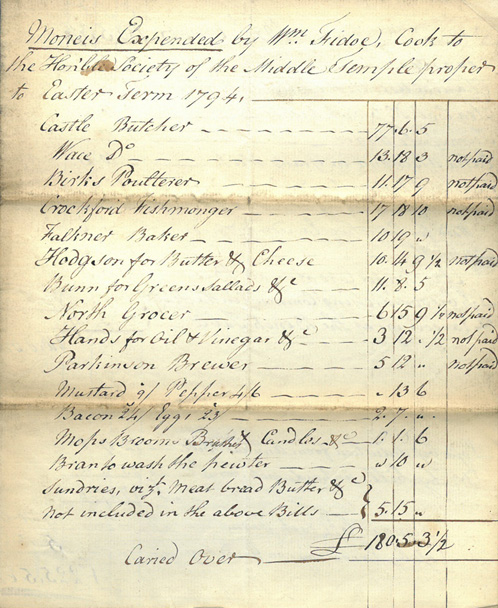 Fidoe also managed to provoke the ire of a group of students one year. Writing to the Bench, a group of unknown students argued that ‘from time whereof the memory of man runneth not to the contrary’ the Cook was to ‘find provide and furnish Plumb Puddings for the Students coming in the Hall’ at one shilling and fourpence. Their complaint was continued in similarly florid language, that Fidoe had ‘wickedly and maliciously demanded’ an extra tuppence on each pudding from them and thereby forefeited his office. It is unclear what action the Benchers took and there is no record of the letter in the Minutes of Parliament. 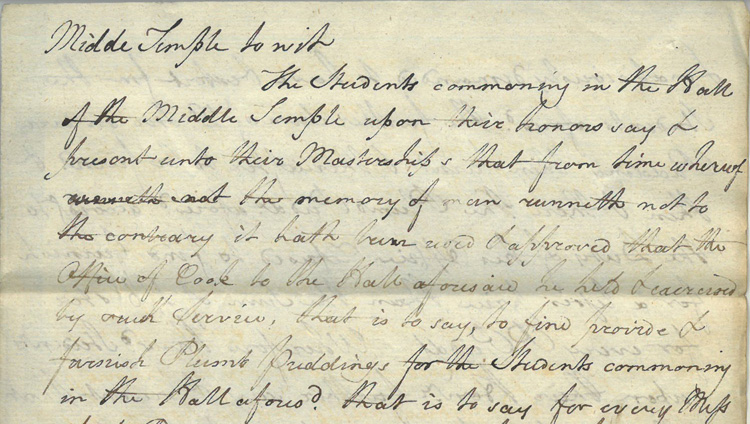 Letter of complaint regarding the price of 'Plumb Puddings', late 18th century

Despite the controversies, the Inn has long prided itself on high quality fare, and indeed in 1829 dealt with Thomas Grove, who was the Dealer in Venison and Fishmonger to no less than ‘their Royal Highnesses the Duke of Clarence (later King William IV), Prince Coburg and the Duchess of Kent (the mother of Queen Victoria). The Inn purchased 3 haunches of venison and 2 necks thereof for the sum of £16 that June, who advertised his extensive range of fish on his bill which included ‘Fine Potted Windermere Char’ and ‘Real Dutch Pickled Herrings’ as well as ‘Cods heads and shoulders’. 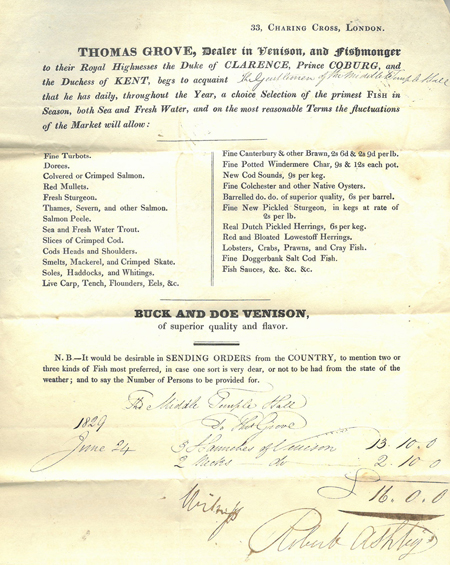 The occasion of the Prince of Wales’ Call to the Bench and opening of the New Library in 1861 was marked by one of the most lavish feasts to be held at the Inn. The menu included roast chicken, pheasant, partridge, capons, wild boar’s head, roast beef, pigeon pâté, veal galantine, beef tongue, and a dazzling array of cakes and other sweet delicacies. 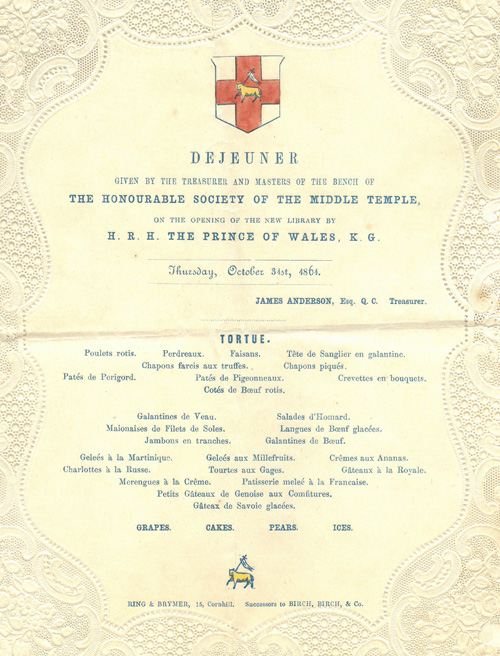 Menu for the 'Dejeuner' given on the Prince of Wales' opening of the New Library, 31 October 1861

Such luxuries were not universally enjoyed in the Victorian Inn. In June 1855, the quality of the soup was so offensive to one Middle Templar that it practically sparked an enquiry. Richard Paternoster, a barrister of the Inn, wrote to the Treasurer on 10 June complaining of the ‘infamously bad’ soup served that day. A number of other Middle Templars were called upon to testify as to the quality of this soup, which Paternoster also described as ‘stinking and abominable’. The Treasurer of the day wrote directly to the cook, Gurden, but he expressed his general appreciation for Middle Temple cooking, and there do not seem to have been serious consequences. An engraving in the Archive illustrates a regular dinner in Hall in the mid-nineenth century. 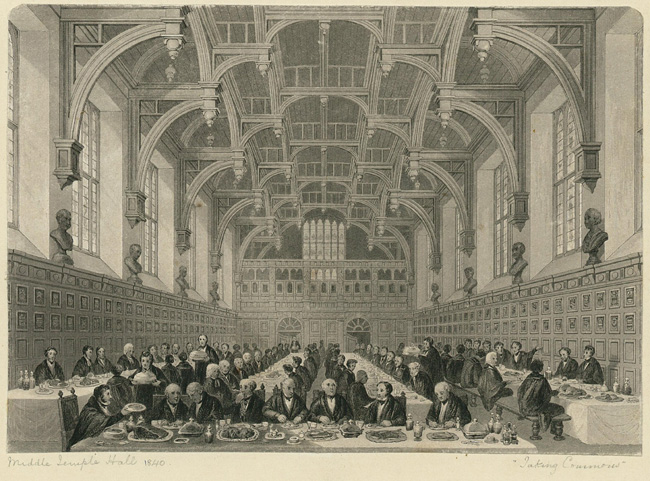 The Second World War brought rationing of food, drink and other necessaries such as linen to every corner of British society, and the Middle Temple was no exception. Rationing continued for a number of years after the War was over and the Inn was in constant communication with the Ministry of Food concerning the numbers of meals being served at the Inn, licenses to serve light luncheons and teas in the temporary common room, the provision of extra bread coupons for manual workers, and even controversies over the weight of potatoes. 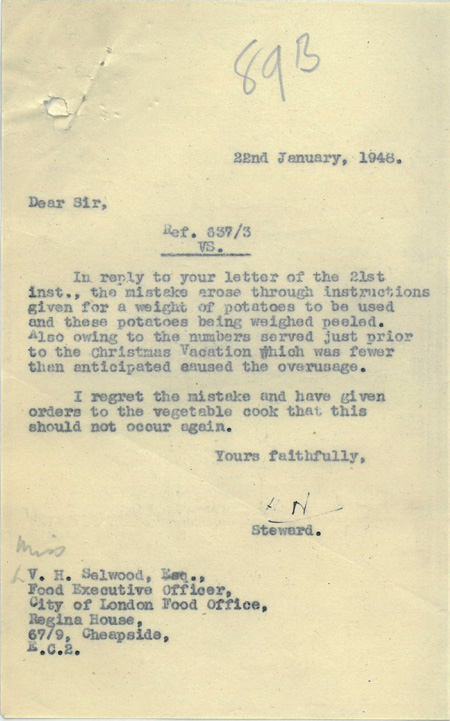 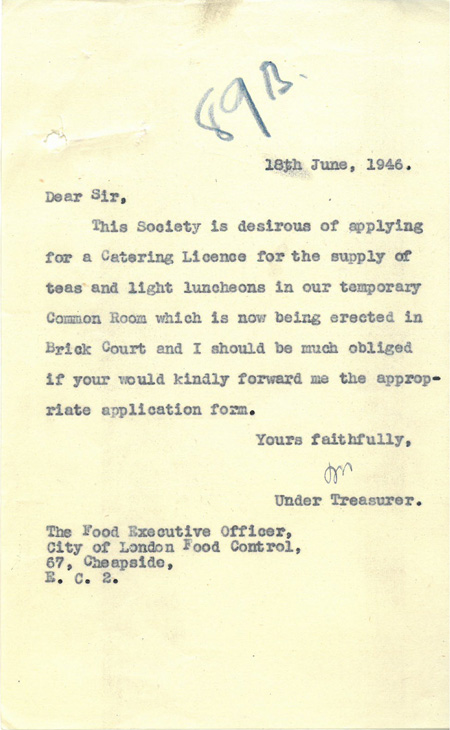 Letters from the Inn to the City of London Food Executive Officer, 1946 and 1948

The struggles of wartime aside, the twentieth century saw the Inn’s tradition of excellent food continue, as illustrated by menus from events such as the nine-course dinner for the American and Canadian Bar Associations in 1924, and Grand Day 1999, the latter of which includes directions for the use of the Loving Cup. 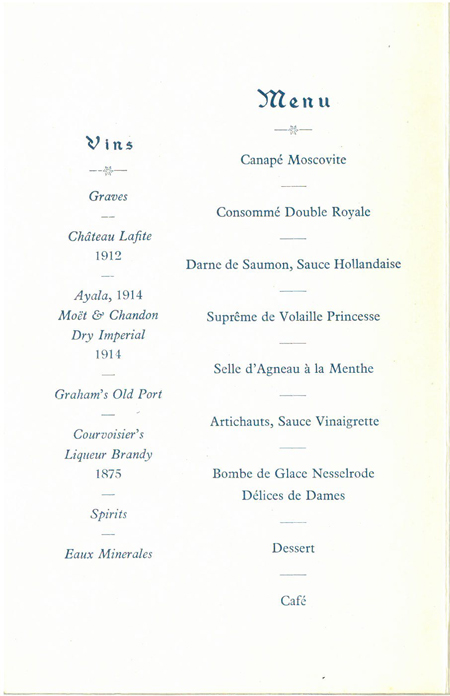 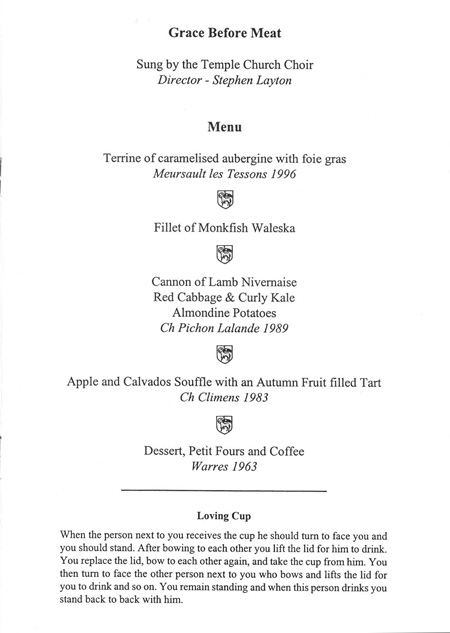 Menus for a dinner for the American and Canadian Bar Associations in 1924, and for Grand Day dinner 1999

The Inn’s wider historic collections also contain a range of artworks and artefacts relating to food. One picture hanging in the Queen’s Room depicts the Joint Bench Dinner of the Middle and Inner Temple in July 1949, attended by the Inns’ respective Treasurers, Queen Elizabeth and George VI. The Queen had opened the rebuilt Hall that June, following its damage during the war, and the dinner included poulets rotis et jambon bouillés and pommes nouvelles à la menthe (rationing still applied). Terence Cuneo made his preparatory sketch from the Minstrel’s Gallery during the dinner, and he (with his sketch) was presented to the King and Queen afterwards. The painting was acquired by the Inn in 1950, with the help of contributions from Benchers. 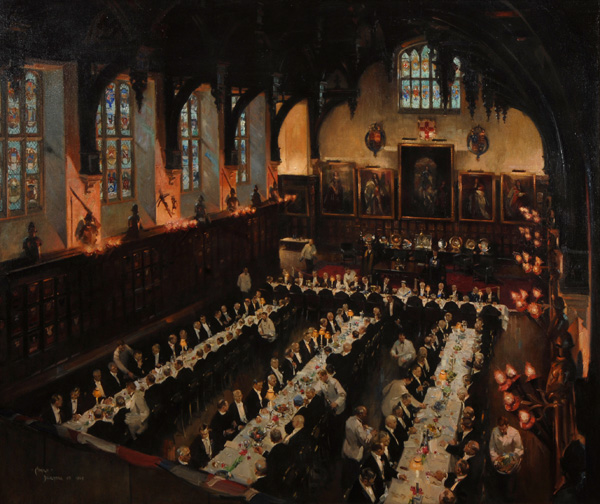 The Inn’s silver collection contains, of course, a number of culinary items. One particularly interesting example is a set of pepper pots in the shape of owls, which were made to order and purchased from Lambert silversmiths in May 1871. Each has distinctive coloured glass eyes, and is engraved with the Lamb & Flag. 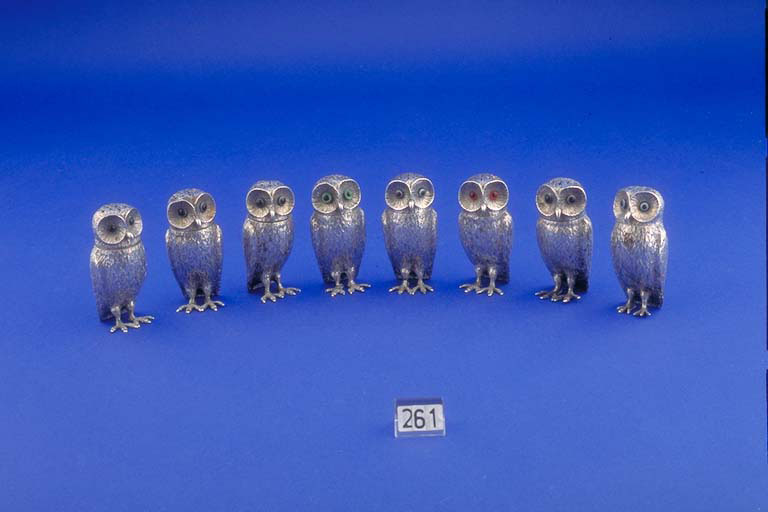 As another legal and academic year begins, there is no doubt that food and dining will continue to play an important role in the life and work of the Inn. Next month we continue in the same vein and look at the history of wine, beer and other drink at the Inn. Happy dining!