The Middle Temple is well-known for its American connections, which stretch back to the sixteenth century and are energetically maintained and recognised today. This month we trace the story of this rich transatlantic relationship, and highlight some points of discord and difficulty.

The period from the late sixteenth century to the early seventeenth was an age of exploration, and many of the key figures in this time of overseas discovery and expansion had intimate connections with the Middle Temple. Sir Francis Drake, who made numerous journeys to the Americas and circumnavigated the globe, is described in the Minutes of Parliament as 'one of the fellowship of the Middle Temple', and his voyage along the North American coast is traced on Molyneux's terrestrial globe, kept in the Library. Sir Walter Raleigh, another great explorer and adventurer of the age, was admitted to the Middle Temple in 1574/5, and personally oversaw and financed the early Roanoke settlement in Virginia, which was established in the 1580s but ended in disaster within a few years. One of the ships dispatched by Raleigh to Roanoke was commanded by one Philip Amadas, also a Middle Templar, who, not long after embarking on the voyage, was fined 20 shillings by the Benchers for his absence from the Inn during the Lent vacation. 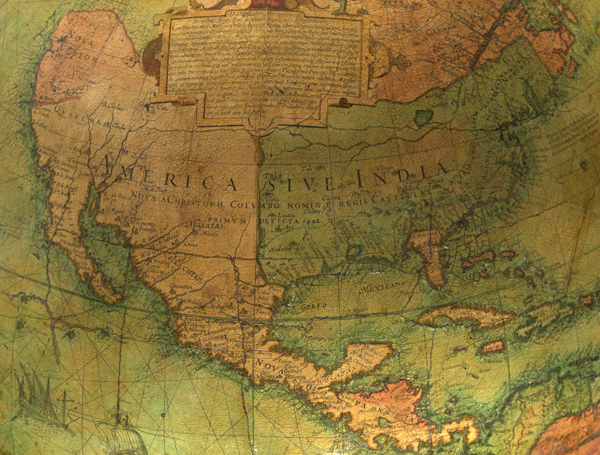 One of the key events in the colonisation of America was the foundation of the Virginia Company, an act in which many Middle Templars were involved. The Company, properly known as the Virginia Company of London, was established by royal charter in 1606, and brought together the resources of numerous investors and merchants to explore, settle and trade along a vast swathe of North America's east coast. Lord Chief Justice Sir John Popham, Treasurer of the Inn from 1580-1587, was the prime mover behind the Company's establishment, holding many of the key early meetings in Middle Temple Hall. A couple of years earlier Popham had presided over the trial of Sir Walter Raleigh (leading ultimately to his execution in 1618) - their coats of arms can, with some irony, be seen beside each other in one of the north windows of Hall today. 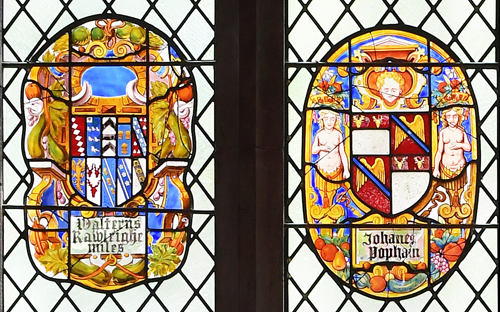 From the late seventeenth century onwards, young men from the colonies began to cross the Atlantic and enrol at the Inns of Court, where they would study the law before returning home to practise. For nearly a century, Middle Temple admitted the vast majority of American students, although the reason, if any, for the evolution of this tradition is much debated. The first member recorded as having originated in America was one Benjamin Lynde, of 'Boston in nova Anglia' - a future Chief Justice of the Province of Massachusetts Bay.

These young men would (unlike many of their contemporaries) engage in their legal education - to the extent that this was available in the eighteenth century Inns of Court - and some of this activity has left a documentary record in the archive. Two manuscript 'Candlelight Exercises' - legal cases accompanied by specific problems to be answered - survive which bear the signatures of a pair of young Americans who would go on to great things in the years to come. Charles Cotesworth Pinckney (admitted in 1764) served as a Brigadier General in the War of American Independence and was a presidential candidate in 1804 and 1808, and Thomas Heyward (admitted in 1765), who was a signatory to the Declaration of Independence. 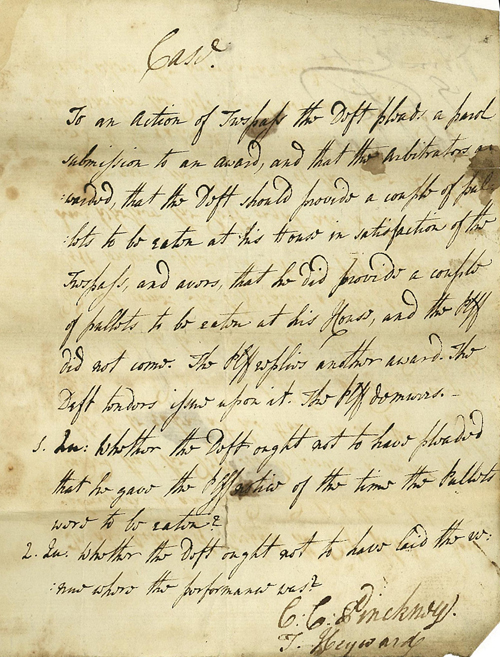 Following their legal education and Call to the Bar in London, most of these young men would return to their home colonies, where many became successful lawyers or politicians, and a number (as we have already seen) became prominent figures, well-known to history, in the War of American Independence and the political, legal and constitutional wrangling that surrounded it. The First Continental Congress, which convened in 1774 in response to the 'Intolerable Acts' passed in retaliation for the Boston Tea Party, elected one Peyton Randolph, a Middle Templar admitted in 1739, as its first President. 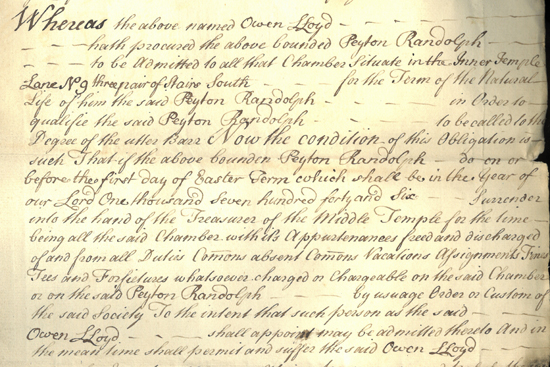 Another Middle Templar, John Dickinson (admitted 1753), drafted many of the important declarations and pamphlets in the years leading up to the outbreak of war, for which he was dubbed the 'Penman of the Revolution' - he was credited with the phrase 'no taxation without representation'. A quantity of archival material survives relating to his time at the Inn, including records of his attendance at dinners in Hall, and paperwork relating to his tenancy in chambers at No 2 Middle Temple Lane.

When Congress met climactically in July 1776, John Dickinson also played a role in drafting the Declaration of Independence, and the 55 signatories included 5 Middle Templars: Edward Rutledge, Thomas Heyward, Thomas McKean, Thomas Lynch and Arthur Middleton. In 1817 a facsimile declaration was produced and signed by Acting Secretary of State Richard Rush, and is in the Inn's possession. A facsimile of this facsimile hangs on the third floor of the Ashley Building. 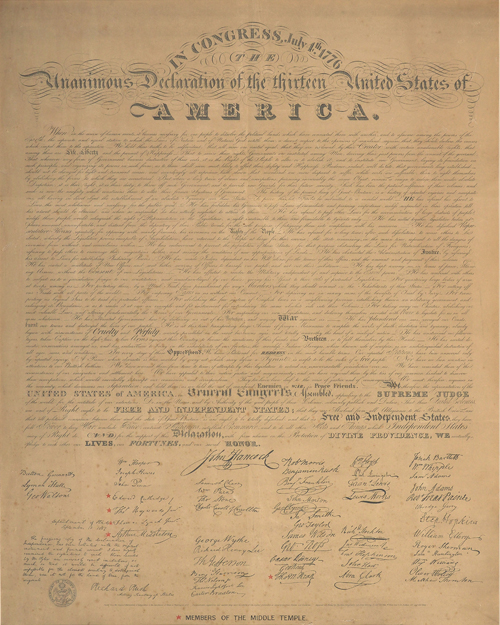 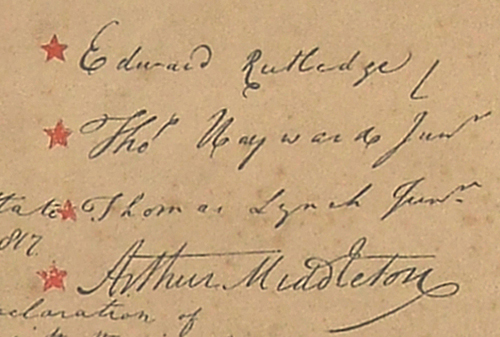 Middle Templars were also notable for their involvement in the military engagements of the Revolutionary War which followed the declaration. John Laurens had been admitted to the Middle Temple in 1772, after travelling from Charleston, South Carolina, but following the outbreak of war hastened home to fight for the cause of independence, soon becoming one of Washington's aides-de-camp alongside Hamilton and Lafayette. He saw significant action at Brandywine, Germantown and the defence of Charleston, as well as playing important diplomatic roles. He was killed at the Battle of the Combahee River in 1782, not long before the end of the war. In 2004, a copy of a posthumous portrait was commissioned for and donated to the Inn, hanging today beside the Declaration of Independence on the Library staircase. 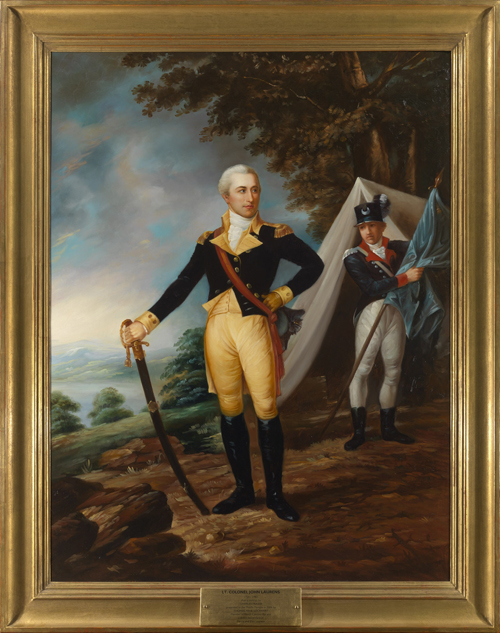 The Inn was well-represented on the other side of the revolutionary struggle, militarily and otherwise. Sir Banastre Tarleton, admitted to the Inn in the early 1770s, was one of the most prominent (and hated) British commanders during the war, becoming known for the alleged atrocities of his men. A notable American loyalist Middle Templar was William Franklin, son of the more famous Benjamin, who was admitted in the early 1750s and, while a student, sired an illegitimate son and named him William Temple Franklin, perhaps after the Inn. He was Called in 1758, and was appointed Governor of New Jersey in 1763, an appointment he held until 1776, when he was imprisoned, before fleeing to New York and eventually to Britain, where he remained.

Entry in the Students' Ledger of William Franklin 'of Philadelphia in America' (MT.3/STL/1)

Another Middle Templar, Edmund Burke, had been notable in his defence of the American rights back in London. A Member of Parliament, he had argued fiercely against the excessive taxation of the colonists in 1774, and warned of the reaction that would follow, claiming that 'They will cast your sovereignty in your face. No body of men will be argued into slavery... The Englishman in America will feel that this is slavery; that it is legal slavery will be no compensation'. He was, of course, spot on. 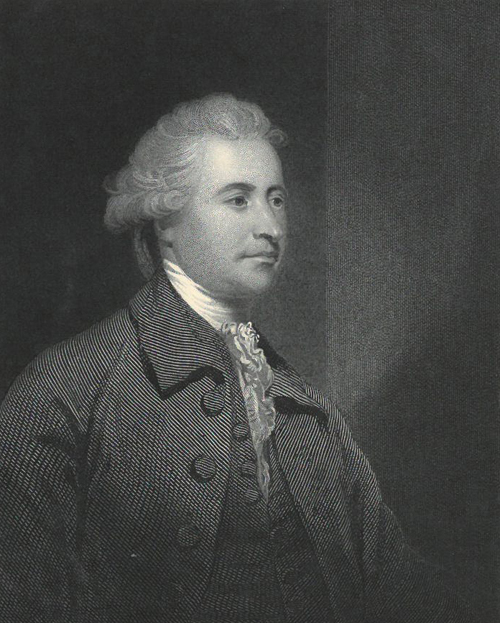 Following the British defeat, admissions slowed from the newly independent Americans as they began to build up their own institutions - indeed, many Middle Templars were intimately involved in this process, including the drafting of the United States Constitution. The motion which arguably initiated the process of drawing up a constitution was initiated by Charles Pinckney (admitted 1773, not to be confused with Charles Cotesworth Pinckney), and John Dickinson and John Rutledge (admitted 1754, and a future Chief Justice of the United States), were instrumental in drafting the text, which was ultimately signed by seven Middle Templars. 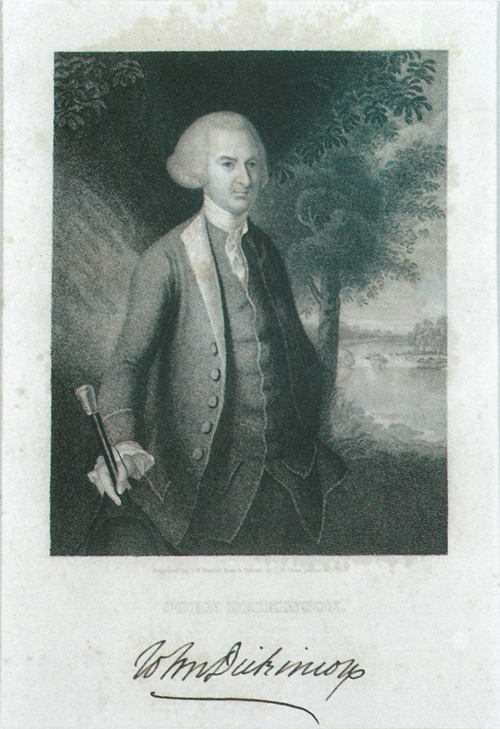 Between 1812 (when war between the US and Britain broke out once again) and 1900, there were just 17 admissions from America. A new transatlantic connection, however, began to be forged in the early twentieth century. Joseph Choate was an American lawyer who served as the US Ambassador to the Court of St James's from 1899. In 1905, he was made an Honorary Bencher of the Inn - the first American, and indeed foreigner, so honoured by any Inn of Court. This began a Middle Temple tradition of electing US ambassadors to that degree. Also Called as an Honorary Bencher was Chief Justice Taft, formerly US President, who remarked on the occasion of his Call in 1922 that he felt 'strangely moved, finding myself sitting here in the home of Blackstone, in the very cradle of the Common Law of England and America'. 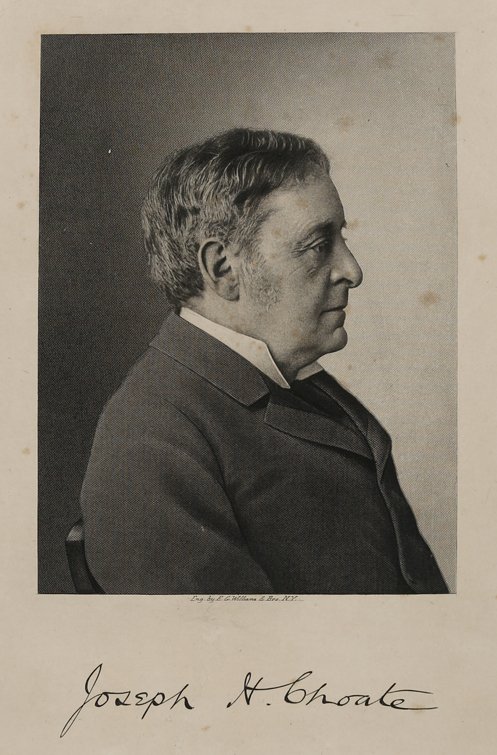 Throughout the twentieth century, the Inn entertained groups of American lawyers on a number of notable occasions. 1924 saw the first of many occasions on which the American Bar Association held their annual meeting in London, and were hosted by the four Inns at a grand dinner in Middle Temple Hall. Proceedings also included a special service in Temple Church, and a reception in Westminster Hall at which the English and Canadian Bar Associations welcomed their 'American Brethren'. The ABA were also entertained at the Inn on the occasions of their annual meetings in 1957, 1971,1985 and 2000. 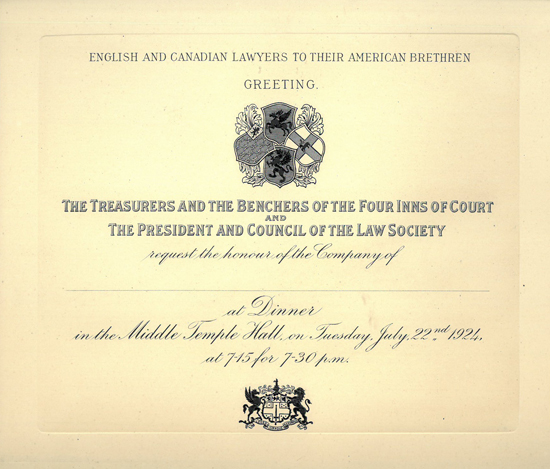 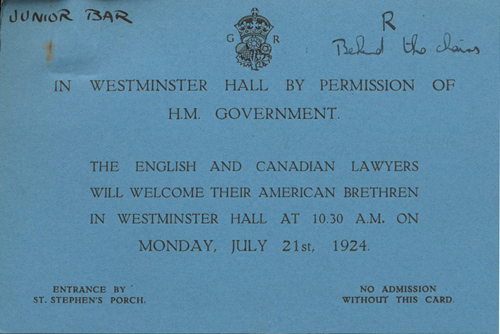 The strength of our transatlantic relationship was truly demonstrated in the years following the Second World War. The Blitz had wrought significant damage to the Inn - the Hall had been badly hit, the Victorian library all but destroyed, and many other buildings affected. The contribution of the War Damages Commission was insufficient, and the American and Canadian Bar Associations stepped in, generously providing funds. Their contribution is commemorated by plaques outside Hall, and is gratefully remembered to this day. 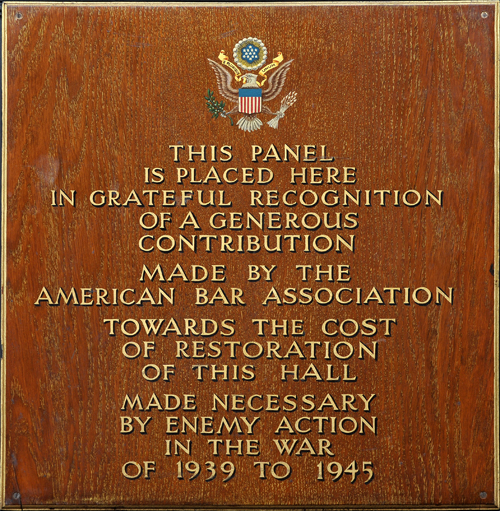 Plaque outside Hall recognising the ABA's contribution towards its restoration

A number of prominent Americans were Called as Honorary Benchers in the second half of the twentieth century. The US Ambassador Anne Armstrong was Called in 1976, making her the Inn's first female Honorary Bencher, as well as the only female Bencher (other than the Queen Mother) at the time. 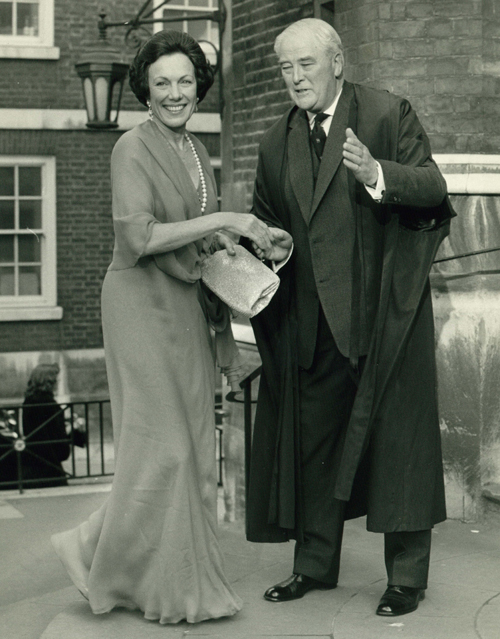 Warren E Burger, Chief Justice of the US 1969-1986, was Called in 1971 - he visited the Inn on many occasions, and also spearheaded a movement in the 1970s and 1980s to establish Inns of Court in the US, in the image of their Old World counterparts. At a ceremony in Washington DC in 1988, Burger signed a 'Declaration to commemorate and celebrate the perpetual friendship and brotherhood' between the London and American Inns. 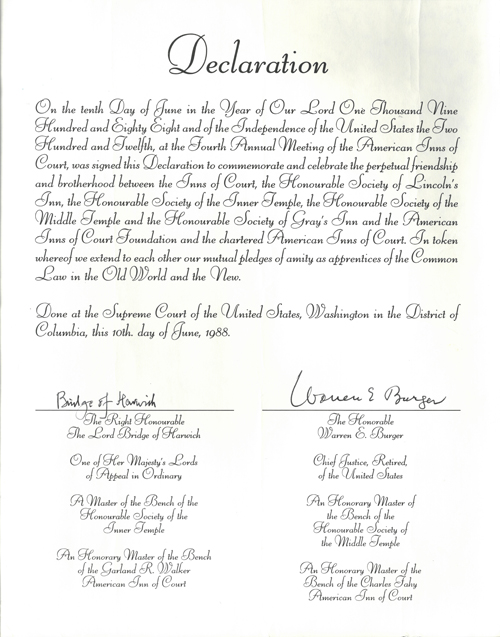 Middle Temple's Library is notable today for its rich collections relating to US law, to be found on the third floor of the Ashley Building, previously known as the American Floor. This part of the building has been converted into a series of rooms for educational and training purposes, and renamed the Rutledge Suite, resonating with the Inn's revolutionary connections. The Rutledge Suite was opened by US Ambassador Louis Susman in September 2011 as part of the programme of the American Inns of Court Amity Visit to London that year. 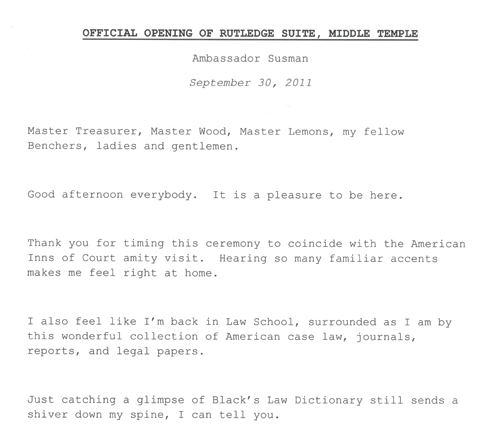 Extract from the speech of Louis Susman at the opening of the Rutledge Suite (MT.14/ABA/18)

The quatercentenary of the establishment of the Virginia Company was marked, in 2006, by two gala dinners and entertainment from the Phoebus Cart theatre company, headed by Master Mark Rylance. The performance, entitled 'An Utopian Entertainment to Celebrate the 400th Anniversary of the First Jamestown Charter', and included a masque, 'The Marriage of Pocahontas'. Master Rylance's comments in the event's programme concluded: 'Long life the friendship between America and the Middle Temple... may that friendship continue to be a force for liberty, justice and good government between all people'.

Programme for the quatercentenary celebrations of the signing of the Virginia Charter, 2006 (MT.7/GDE/201)

In the past five years, the relationship has continued to flourish. In 2015, a large delegation from the ABA visited London as part of the Magna Carta octocentenary celebrations, events which included the Honorary Bench Call of ABA President William Hubbard. An Amity visit to Washington DC in 2017 underlined the Inn's transatlantic connections, and last year His Excellency Robert Wood Johnson IV (better known as Woody Johnson), the present US Ambassador, was Called as an Honorary Bencher, continuing that time-honoured tradition. The friendship between the Middle Temple and the United States of America certainly lives on, and shows no sign of fading.