To mark the occasion of the Middle Temple Garden Party on July 4th, this month we’re looking at archives relating to the gardens. The Middle Temple has kept a garden, in various forms, for centuries – indeed Shakespeare’s Henry VI, Part I, refers to the ‘Temple Garden’ as the location for an argument between York and Lancaster, complete with the plucking of red and white roses, which led to the War of the Roses. While there is no documentary evidence to support this, the event has been depicted numerous times in art, including in this engraving, after a painting exhibited at the Royal Academy in 1871. 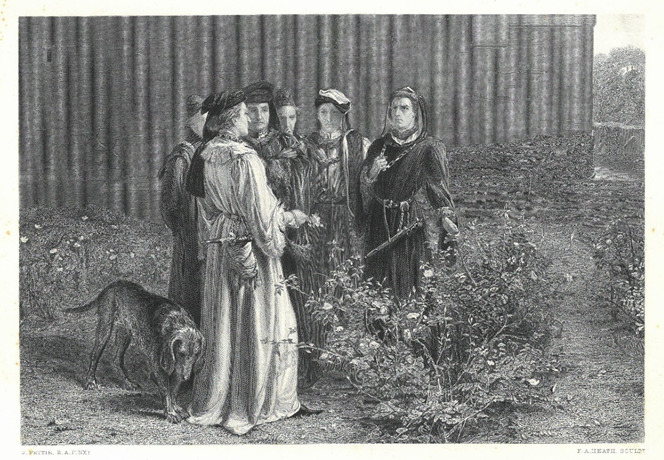 "The Rival Roses" engraved by F.A.Heath after a picture by John Pettie RA (MT.19/E11)

Some of the earliest records in the Archive relate to the garden. In 1619, the Gardener William Hutchins presented a bill to the Inn for extensive work and planting undertaken, including the laying of a ‘knot garden’ (a formal, square garden popularised by the Tudors). The bill also includes sums for plants such as ‘roasmary to sett alonge by the wall’, ‘3 hundred of sweete brire’ ’17 lyme trees to sett round aboute’ and ‘9 elme trees’ and charges for a fortnight’s work by Robert Greene, a labourer, ‘weedinge the garden twice over’ and ‘mendinge of the whelebarowe’. 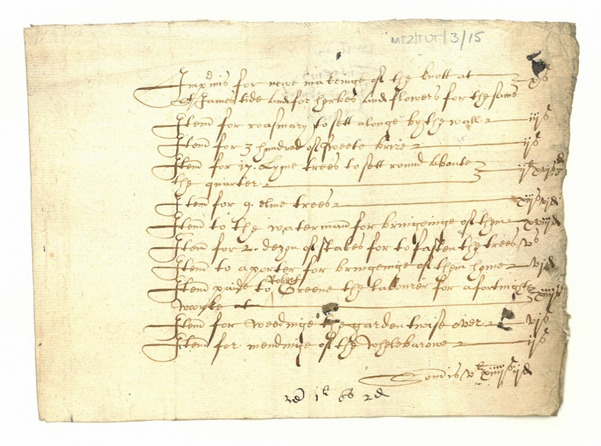 Early engravings and plans give a visual idea of what the Garden might have looked like in the seventeenth and eighteenth centuries. A 1677 map of London shows a garden heavily planted with trees (perhaps some of those laid out by William Hutchins) and a small Benchers’ Garden adjacent to the ‘Hall Court’, as well as the crowded boats moored at the end of the Lane. A later engraving of the Temple in 1722 depicts a spacious, formal courtyard garden, with a grand avenue leading down to the river. It also shows the fountain (built in 1681) surrounded by trees in the Benchers’ Garden to the North. 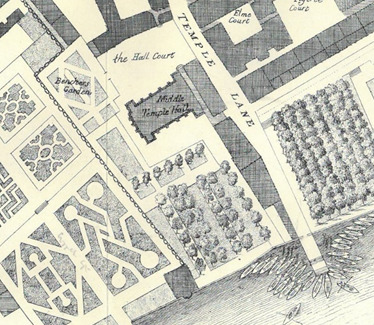 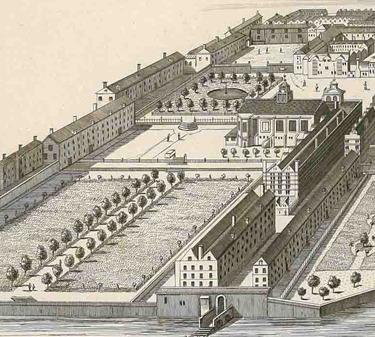 The Chrysanthemum show of the Temple Gardens was an occasion of acknowledged significance, not just for the Inn but for London society at large. In 1857, the Treasurer of the day, Master O’Malley, proposed at a meeting of Parliament that the gardener be given £5 ‘for the satisfaction of his chrysanthemums’. In 1881, the gardener felt moved to write to Parliament, expressing his dismay at the possibility that the annual display might be discontinued. One Victorian magazine published this drawing with a short rhyming couplet. 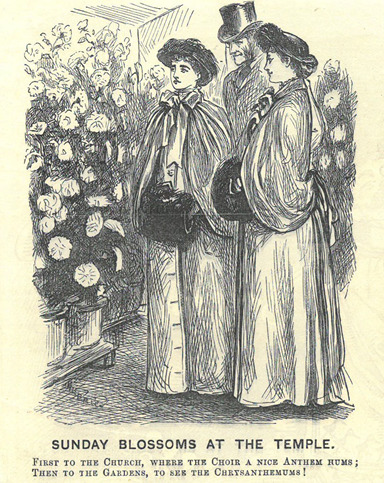 In 1916, as the First World War raged on, the garden set the scene for a Red Cross Fete to raise money for that organisation’s work, vital at that time to the war effort. It included performances of extracts from Twelfth Night and Much Ado about Nothing, Elizabethan songs, and dance and music provided by the bands of the Coldstream and Grenadier Guards. The cast included the notable actors Ellen Terry and Sir George Alexander, and among the tea waitresses and programme sellers was Miss Lloyd George, daughter of the Prime Minister. 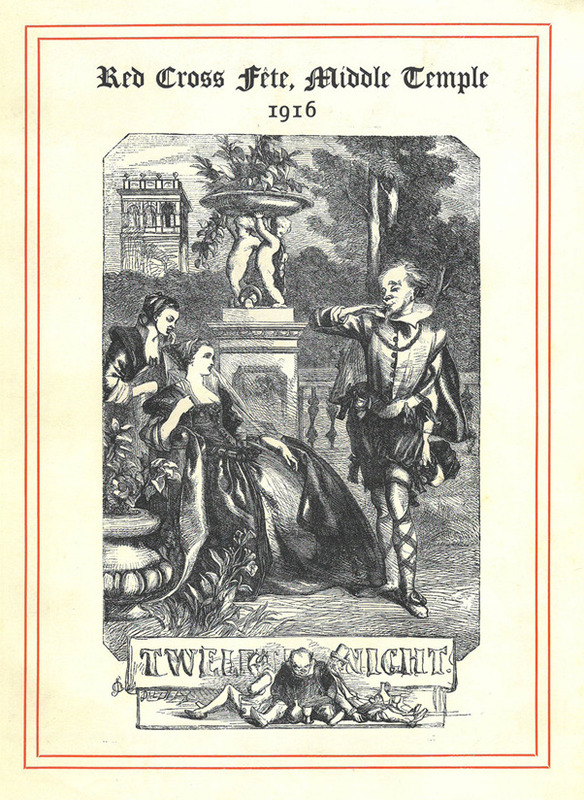 The Middle Temple Garden Party has long been an occasion for the gathering of the great and the good. In 1937, Ladapo Ademola II, the Alake (King) of Abeokuta in Nigeria (whose son, Adetokunba Ademola, was a member of the Inn and later Chief Justice of the Supreme Court of Nigeria) was among the honoured guests, and is depicted in the photograph below walking with the Treasurer of the day, Heber Hart KC. The occasion also featured entertainment from the Band of the Royal Regiment of Artillery, who performed extracts from ‘Carmen’ and ‘The Gondoliers’, and refreshments including tongue sandwiches, petits fours and five types of cake, all washed down with sherry in the Parliament Chamber. 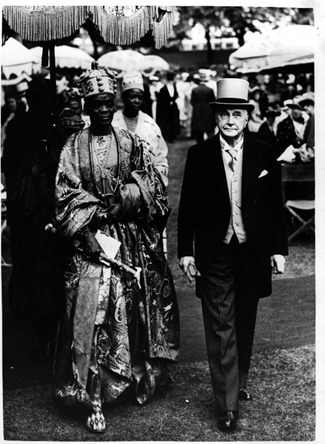 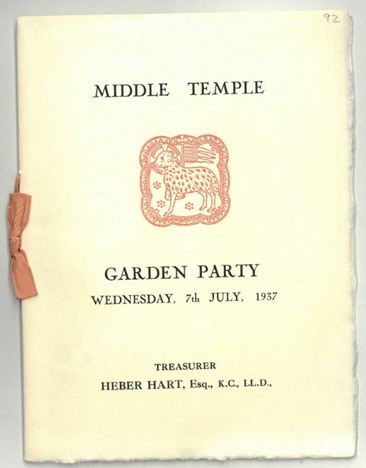 During the Second World War, the garden played an important and practical role in the life of the Inn, when the lawn was repurposed as allotments for growing vegetables including tomatoes, cabbages and beans. The iron railings at the end of the garden were also sacrificed for the war effort. A large crater was made in the garden during a bombing raid in May 1941, and an extraordinary range of wild plants came to flourish in the ruins around the Inn over the coming years. 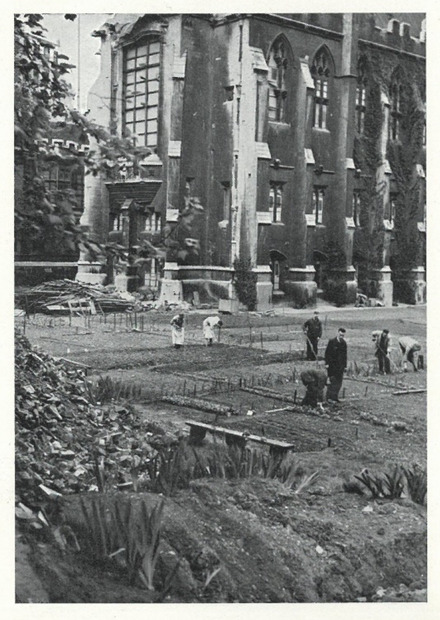 Restored to their former glory following the privations of the war years, the Gardens continue to thrive, and offer a setting for both peaceful reflection and sunlit celebration throughout the year.