January 2021: The Art of Complaining - A History of Complaints at Middle Temple

The Inn’s Archive contains many hundreds of items of correspondence, a great deal of which are letters of complaint. This month we take a look at the rich history of complaining at the Inn, and at the various aspects of Middle Temple life which have been cause for complaint from its members, tenants and visitors.

The art of complaint has, it appears, been a part of human life for millennia, with the earliest known record of a complaint dating from 1750 BC (making it over 3,700 years old). The tablet from Babylon, now held at the British Museum, details a customer named Nanni writing to his supplier Ea-nasir with a complaint about the copper ore he received from him.

Complaint Tablet to Ea-nasir © The Trustees of the British Museum

The Middle Temple Archive does not have any complaints quite that old, but a great many have been made by Inn’s members and tenants over the years about an array of issues, ranging from the lack of vegetable variety in Hall to the Temple Church organ being too loud.

One of the earliest complaints surviving in the Middle Temple Archive comes from 1667/8, in which a member makes a complaint about dancing and gaming being permitted in the Temples on the Lord’s Day, stating that this practice is of “much grief to good men” at the Inn. The anonymous writer even urges practical measure to stop the dancing and gaming by putting “some soldiers at the Hall doors if nothing else will do." 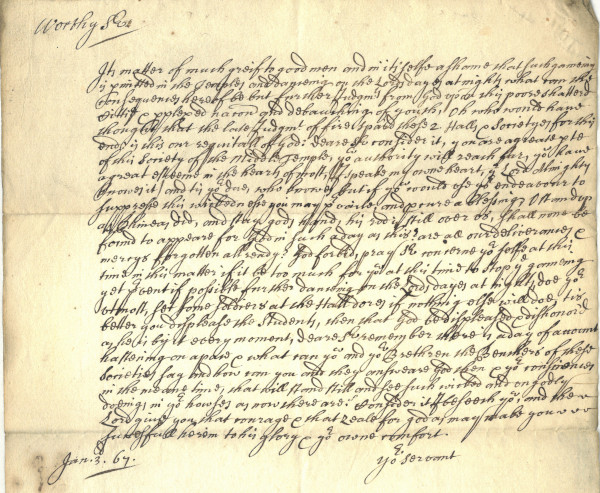 Dining in Hall is a central part of life at the Inn. Celebratory dinners mark important occasions throughout the year, while the educational programme has for centuries been focussed on the Hall, from medieval moots and Readings to keeping ‘commons’ and more recently Qualifying Sessions ahead of Call to the Bar. While a wide range of high-quality food and drink has traditionally been served to the Inn’s members and their guests, nonetheless this important part of the Middle Temple experience has faced some unavoidable and strongly-worded complaints from unhappy diners.

In 1843 an anonymous complaint was made regarding the custom of members saving themselves a place at the table by placing a spoon or fork across the plate. He states that “I went into Hall before 5 o’clock, and although but about six gentlemen were present, yet almost every place was ‘spoon-wise’ or ‘fork-wise’”.  The writer asked for the custom to be discouraged and, as an alternative, a card or hat be left on the plate instead.

One member eating in Hall was unlucky enough to find a sharp object in his food two weeks running. Writing in January 1959, Mr Groome stated that the previous week he found ‘a nail in the portion of Temple pudding’ he was served, only to then find ‘a pin (dressmakers)’ in his currant pudding the week after. Thankfully he did not swallow either of the alien objects, but strongly believed that the Inn should accept liability for incidents which could have had disastrous consequences. 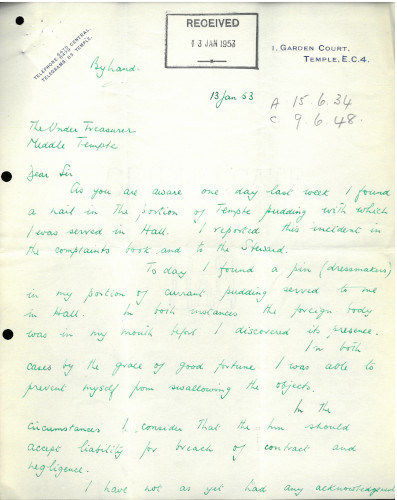 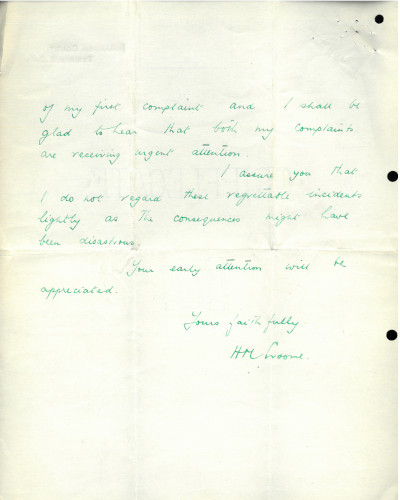 Foreign objects in the food was not the only reason for complaint, there were other grievances expressed regarding the Inn’s cuisine, for example, in 1933, Sir Denham Wormington had a complaint regarding his turbot which “appeared very inadequate and unappetising and when tasted was pronounced […] to be bad.” Things weren’t much better in 1935, when it was reported that the sauté potatoes were ‘off’, a member had eaten a bad fig and complaints were heard about the ham.

One outrageous event was the serving of an ‘absolutely undrinkable’ Champagne at the last dining of term to celebrate the installation of the 1938 Treasurer. The ‘ancients’ (a group of elder Benchers) asked the Inn to pay “a shilling or two more” in order to ensure there was decent wine and Champagne with dinner. Unfortunately for ‘the ancients’, the Inn stated in their response to the complaint that the letter was classed as anonymous so it would not be taken forward, also noting that its Benchers had heard no other complaint regarding the Champagne themselves. 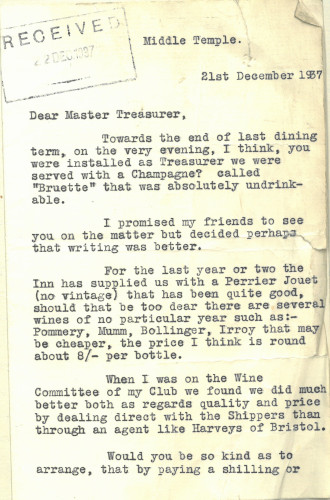 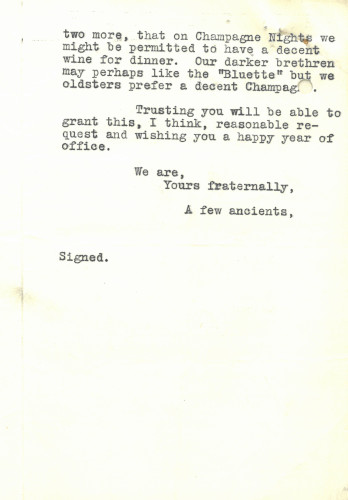 This was not an isolated event. In 1933, a complaint made about the sherry served in Hall. For years, Middle Temple had the reputation of having the best sherry obtainable. However, the letter of complaint stated that for some reason, the previous term, the quality of the sherry had fallen off and requested the Inn “go back to the old brown sherry which was so popular.” Nevertheless, this complaint seems to be an anomaly, as the Inn’s reply states that judging by the consumption, “the sherry was at its most popular, with the demand last term being greater than in any previous term.”

It was not just alcohol that caused complaints amongst the Inn’s Members: suggestions were put forward for “further efforts be made to improve the coffee” in 1935, and a request was made for “China tea at luncheon” in 1933.

The Inn is made up of a great many chambers, let to tenants as offices, living quarters and shops over the years. However, not all tenants have been happy with the standard of their lettings.

The issue of excess smoke from chimneys was still causing problems over 100 years later, when in 1957, there were two complaints from residents living at 2 Garden Court regarding the volume of smoke coming from the chimney in Hall. In these letters of complaint, the tenants ask if something can be done to limit the smoke levels, writing that “the prevailing N.E. wind does not help, but need so much smoke be made in the first place?” 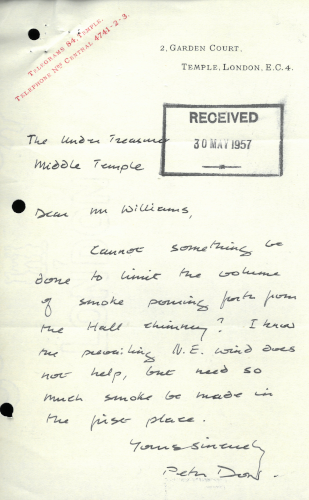 Complaint from Mr Don regarding smoke from the chimney in Hall, 30 May 1957 (MT1 LIN)

As over time chambers have increasingly become working spaces, peace and quiet has been called for. Unsurprisingly, many complaints about loud noise and disturbance have been made over the years. In 1758, a complaint was put forward from Mr Ralph Hodgeson regarding his neighbour who has set up a Church Organ in his chambers and was “playing upon it so much that it was impossible for the petitioner to transact any business.” Another Organ, this time the Temple Church Organ, was also subject to complaint in 1954, when Mr R. Travers complained of being disturbed by the “frequent and low playing of the organ in the Temple Church at most hours of the day.”

Organs were not the only thing disturbing the peace in the Inn. Tenants were also subject to the constant barking of dogs, which caused such a racket that one resorted to calling the police. Mr Slough, who wrote to complain in July 1838, stated that the dogs were making such a noise that he was obliged to contact the Policeman and Watchman on duty, requesting that the dogs be ‘sent away’ from the neighbourhood.

Mr Wyke had a similar issue in 1841, but this time with a “disturbance created everyday by the boys who play on the heaps of rubbish and stones at the end of Middle Temple Lane.” Unfortunately for him, his chamber’s window faced the Lane and he was therefore unable to avoid hearing the noise which distracted him from his work. 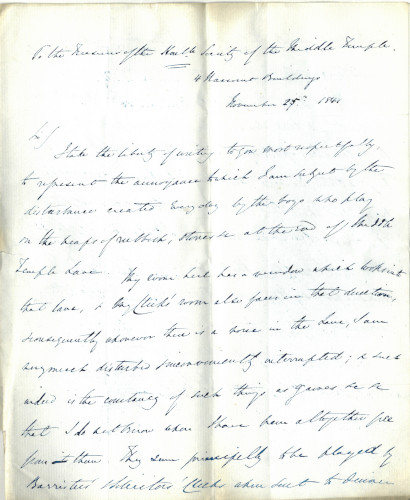 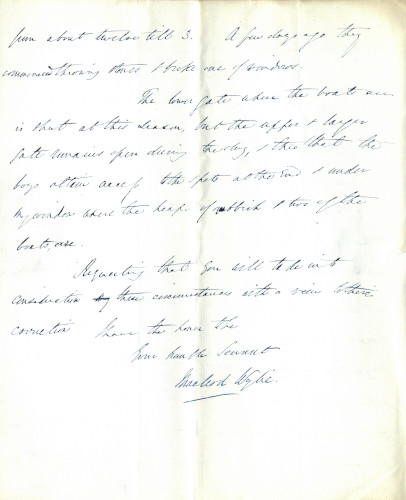 A noisy neighbour may have been considered desirable compared to the ‘filthy practices’ of one that Mr Kirway had to put up with in 1842. He wrote to the Inn to complain about the laundress living in the attic above him at 9 Inner Temple Lane, saying that the “constant practice of this person to throw out the contents of the chambers utensils” was leading to large deposits of this matter being found by workmen repairing the Church. Mr Kirway states the laundress’s actions were affecting the health and comfort of dozens of people, putting his ability to go on circuit in doubt, and causing him to give his landlord notice of intention to quit his tenancy.

It would appear from the records that, during the 19th century, toilets at the Inn left a great deal to be desired and were the subject of many a complaint from tenants. In 1838, for example, Mr Bateman complained that the water closets were “unfit for a human to make use of them”. This issue was still prevalent in 1841 when a Mr Wright wrote to the Inn complaining that the Barristers’ WC was in a filthy state and desperately needed fixing.

Things did not seem to have improved by 1858 when a petition was put forward by several members with the request for more toilets to be put in around the Inn and stating that the ones available were of inadequate quality. We can be thankful that things are better today! 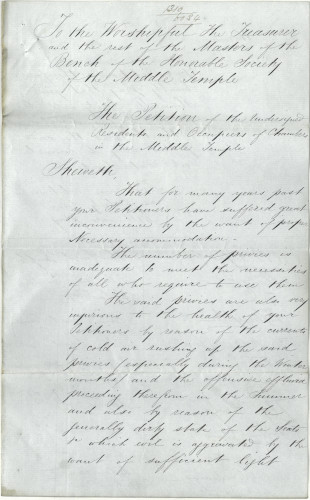 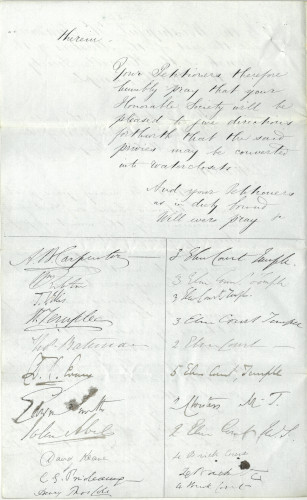 It was not just WC’s in need of repair; the Inn faced frequent calls to upgrade the chambers themselves to maintain a liveable standard. A complaint in 1793 from Mr Milward at 1 Brick Court states that he had “sustained considerable damage owing to the needful repairs to the roof of the chambers” that had been neglected by the Inn.

In May 1841, Mr Chell put forward a firm complaint regarding the windows in his building which were in desperate need of repair. He stated that “almost all of the windows want fresh lines and beadings” in order that he might comfortably open and close them. 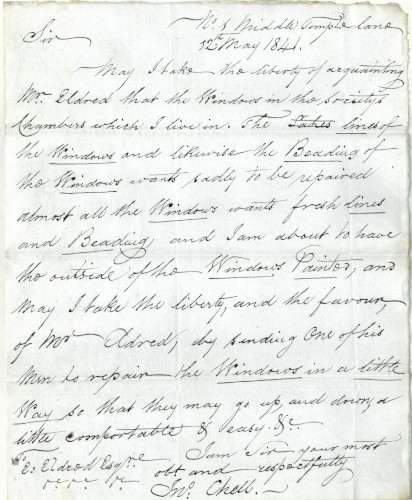 Mr Chell's complaint about the standard of the windows in his chambers, 12 May 1941 (MT1 LIN)

Throughout its history, the Inn – like any such institution – has been subject to many complaints, gripes, and grievances. Looking back on the various grievances of members and tenants gone by – some of which were met with swift action from the Inn, some of which were dismissed entirely – we can be grateful to live in the present day.