The four Inns of Court are a familiar presence in the legal landscape of London, but their counterparts in the field of legal education, the Inns of Chancery, have disappeared into obscurity. These once great societies performed a vital role in the education of barristers and solicitors, but they have long since dissolved, the foundations of all but one now lying buried under layers of concrete. Each Inn of Court was associated with several Inns of Chancery – Middle Temple being connected to New Inn and Strand Inn. Strand Inn was demolished in the 1540s to build Somerset House, but New Inn, located in the parish of St. Clement Danes, survived up until 1902. Its connection to the Middle Temple meant that New Inn’s surviving records, and some artefacts, came to the Society and these provide a fascinating insight into the history of this lost Inn of Chancery. 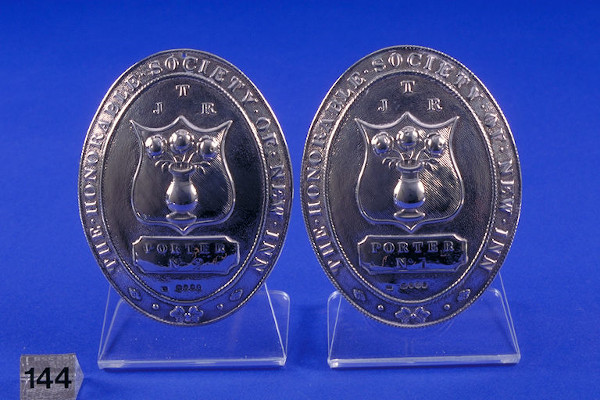 A great deal of what is commonly repeated about the early history of New Inn is derived from John Stow’s 1603 Survey of London . He informs us that, prior to its role as an Inn of Chancery, New Inn existed as a common hostelry under the sign of ‘Our Lady’, and it began to act as an Inn of Chancery around 1485. Information obtained through report by Stow stated that the occupants of ‘Our Lady’ had removed there from an older Inn of Chancery, St. George’s Inn in Seacole Lane, which was abandoned due to its poor condition and remoteness from other buildings relating to the legal profession. This information appears to originate from hear-say about events that lay over one hundred and twenty years in the past at the time of the publication of Stow’s book, so its veracity is to be doubted. Extant Court of Chancery documents throw Stow’s dating into doubt, as they include records of various lawsuits involving New Inn as early as 1422, and specifically mention principals and fellows of the Inn in the 1450s and 1460s. Although there is probably a kernel of truth within early reports, the precise date and circumstances of the foundation of New Inn, like the other Inns of Court and Chancery, remains obscured by the mists of time. 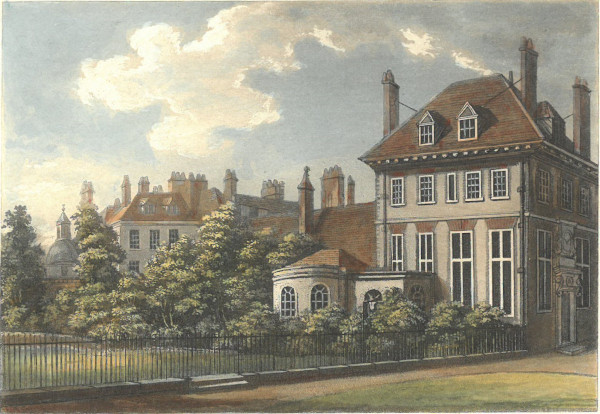 The function of the Inns of Chancery changed considerably over the lifetime of the societies. Conjecture supposes that they initially existed as hostels for the clerks of the Court of Chancery that were employed in the writing of writs. By the 15 th century, they had evolved into educational institutions. Young men would spend several years at an Inn of Chancery learning the fundamentals of the law before progressing to membership at an Inn of Court. Sir Thomas More (1478-1535) was one of the students who studied at New Inn prior to becoming a member of Lincoln’s Inn. Unfortunately, the archive of New Inn includes no record of More’s membership. Many of the Society’s documents have disappeared over the centuries, with particularly egregious losses in the 17 th century. In the 1670s, the governing members of New Inn, commonly known as the Ancients, wrote ‘the war, sickness, and fire, with a long tract of time have occasioned the loss of all our books, writings and evidences’. The admission records of the Middle Temple survive in the Minutes of Parliament from the year 1501, but the admission records of New Inn start only in 1601. There are no minutes surviving from any date earlier than 1674 and these only exist as a 19 th century copy of the original. 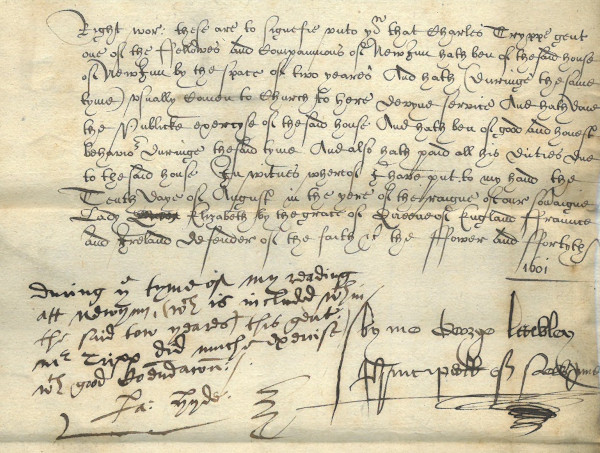 Law students at the Inns of Chancery were primarily educated through bolting, mooting and readings. Bolting originated in the 16 th century and consisted of conversational arguments upon cases and questions of law put privately to the students by Benchers and utter barristers, in which they were encouraged to think over all sides of an issue. Once students became effective bolters, they would move on to mooting, mock trials where students would argue a case and receive judgements from the sitting Reader. Readings consisted of a learned individual lecturing on a particular point of law. This hands-on approach to learning and oral dissemination of knowledge was exceptionally important in a time when books were expensive and difficult to access, even when they existed within libraries.

The Middle Temple was very involved in the education of students at New Inn and sent a Reader chosen annually from amongst the barristers to provide around five or six readings per year and to preside over moots. The Society would send a list of names to the Ancients of New Inn, whom would select a preferred candidate or strike out the names of candidates that they did not want as Reader. S.B. Jackson of New Inn, when reporting to Royal Commissioners inquiring into the arrangements of the Inns of Court in 1854, stated that ‘The Temple usually intimated to us, I believe, the gentlemen they wished to send; and, as a matter of courtesy, I believe we struck out the other names’. The Middle Temple stopped sending Readers to New Inn in Michaelmas Term 1846 and Readings were thereafter abolished. 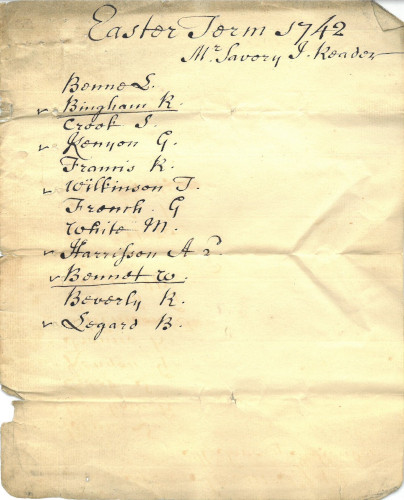 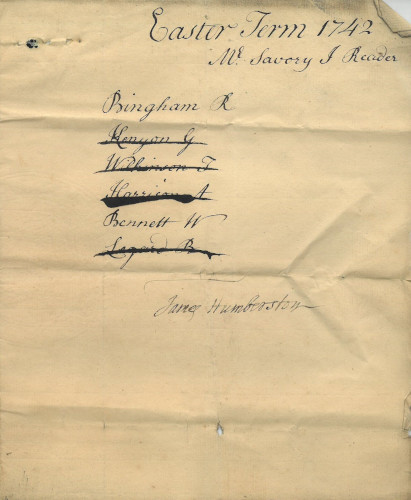 Shortlist of candidates for the position of Reader at New Inn, Easter Term 1742 (MT/12/REA/15)

By the early 17 th century, New Inn’s role as an educational institution had diminished considerably from its heyday in the 15 th -16 th centuries. Minutes of Parliament of the Inner Temple dated 1619 record that ‘. . . complaint hath been made by the principals and governors of the Inns of Chancery that their houses are almost grown so scarce of students that by reason thereof the ordinary exercise of their houses doth decay and cannot be performed’. Legal education at the Inns collapsed during the Interregnum (1649-1660) and could not be revived, despite attempts to do following the Restoration (1660). Although readings were given and moots were held, the Inns of Chancery became primarily landlords and social clubs for solicitors. This led to the eventual death of the societies. New Inn, however, clung on longer to vestiges of its original purpose than some Inns – Samuel Ireland in his Historical Account of the Inns of Court published in 1800 stated that mooting was ‘a custom long since in disuse, except in New Inn, where about a year and a half since, we are informed, a mooting took place, to the no small diversion of the passers-by, who, from the gesticulation of the head, and tremulous motion of the impassioned gentlemen then mooting, began to conjecture that some dangerous malady had seized on the members of the Inn, particularly the Ancients’. Although moots were still held, they were not considered to be a form of serious professional training and were often poorly attended. The precise date in which the moots ceased at New Inn is uncertain, but the last moot papers in the archive date to 1831. 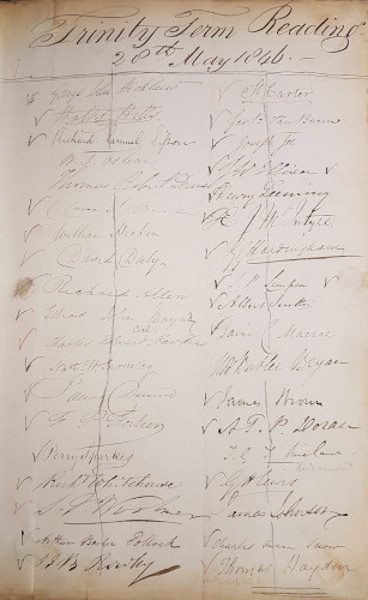 Signatures of attendees at the last Reading at New Inn, Trinity Term 1846 (MT/12/LEC)

By the 19 th century, the Inns of Chancery had ceased even serving much of a social function to members of the legal profession and their membership was ever diminishing. According to the report of the 1854 Royal Commission, two of the four dining tables of New Inn – the Ancients, the Round Table, First Mess and the Long Table – had been combined due to a decline in membership. Matters were even worse at other Inns of Chancery. Lyons Inn only had two Ancients, the only two members remaining, and they had heard from previous Ancients that the last dinner held by the Inn could have been as long as one hundred years before. By this time the Inns of Chancery could provide no real justification for their continued existence – they had ceased functioning as institutions of legal education, barely survived as social clubs, and only appeared to keep limping on by virtue of their antiquity. 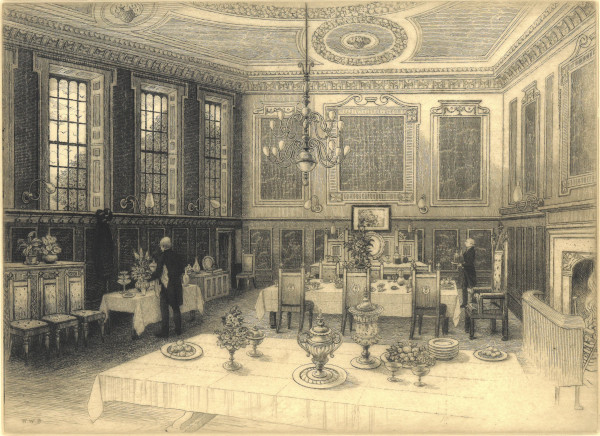 The first Inn to be dissolved in the 19 th century was not an Inn of Chancery, but the Inn of Serjeants-at-Law. Serjeant’s Inn was sold in 1877 after the abolition of the role of the Serjeants-at-Law in 1875. The Inns of Chancery followed suit, some of them no doubt lured to do so by the sum of around £1,500 each member of Serjeant’s Inn had received when it was sold. The division of the proceeds of the sale of the Inns caused public consternation, as many thought that the money should be used for the benefit of legal education. New Inn was compulsorily purchased in 1902 by London County Council for the Kingsway Improvement Project and a court case was brought about what should be done with the proceeds. In the end £55,000 was allocated to legal education, £45,500 was granted to the Benchers of the Middle Temple, £26,000 was granted to the life tenants of chambers, and £31,000 was granted to the members of New Inn. However, despite the sale of all of its properties, New Inn was never formally dissolved and probably faded away on the death its last surviving member in 1937. 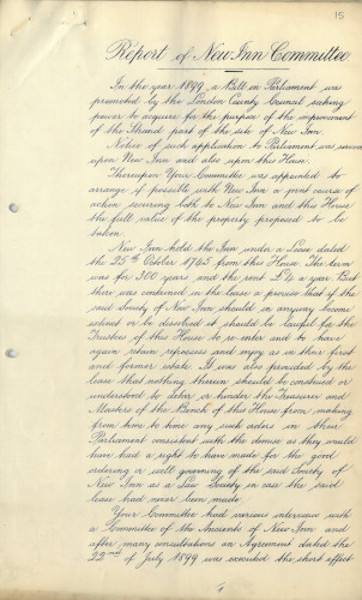 New Inn and the Inns of Chancery played an important and fascinating role in the history of English legal education. However, the loss of their original purpose in this field and their disconnectedness from the social lives of solicitors led to their eventual obsolescence. The dissolution of the Inns of Chancery serves as a stark cautionary tale for all ancient institutions about the importance of remaining relevant in the modern world.