April 2020: Bombs, Blazes and Buckets of Tea – Life at the Inn during World War Two

The Second World War impacted the Inns of Court in many ways, not least in the transformation of a usually advantageous position in central London to an extremely hazardous location. The Inns were far from unscathed by the Blitz - halls, chambers and libraries were razed to the ground by explosives and their subsequent fires. After the war, the Middle Temple began to compile information in order to publish a chronicle of these dramatic events entitled Middle Temple Ordeal . As part of this information gathering process, Mr Hewlett, the Under Treasurer, wrote to individuals who had participated in the civil defence of the Temple, requesting their recollections of the war. The replies consisted of many fascinating stories about its impact in the Temple, but occasionally contained contradictions and inaccurate information, which caused debate in subsequent letters. Several years had passed since the war, and some specifics may have faded from peoples’ memories during that time. Whilst many details in the first-hand accounts of air raids made it into The Middle Temple Ordeal , the Inn’s Archive retains the full, unabridged recollection of many harrowing nights of destruction endured by its residents.

The duties of A.R.P. (Air Raid Precaution) Wardens placed them at substantial risk during a raid. Rather than taking cover in air raid shelters, they ran about the Temple dealing with fires and casualties while bombs continued to fall all around them.  When a raid started the Wardens were stationed on roofs in order to spot any bombs falling in the Temple precinct. J.L. Manquet, Warden and later Under Porter of the Inn, recalls being on the roof of a building in Elm Court with Collison, a Fireman, and Leslie Browne, another Warden and Cashier of the Inn, during a raid on 24 September 1940. On this occasion they spotted an incendiary hitting Inner Temple Garden – the first bomb of the War to hit the Temple. This allowed them enough time to duck and cover prior to a bomb hitting and destroying 1 Elm Court. Manquet states that they felt the building sway and that they’d put it ‘down to our imagination but a few days afterwards we was speaking to a well-known architect on the subject and he assured us that it was a reality and not fancy as the buildings would sway as much as two feet and still stand up’. 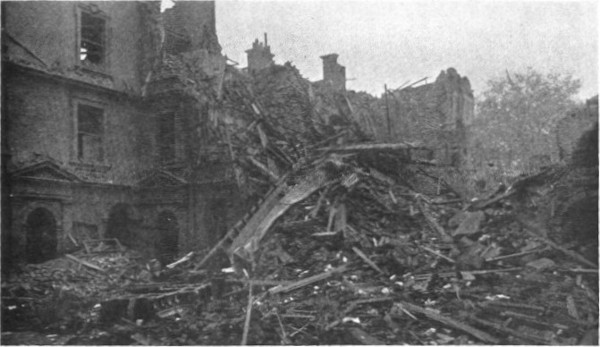 An example of convergent recollections of a single event can be seen in Manquet and Browne’s accounts of the night of 15 October 1940- the date of the air raid that severely damaged Middle Temple Hall. Browne, Manquet and Collison had been relieved of duty at midnight and went to sleep in bunks in the basement of either 3 or 6 Elm Court (depending on the person writing) in order to get a few hours of sleep. Browne awoke to an awful rumbling sound and the noise of water running in complete darkness – this noise was a burst water main and the prospect of rising water in the basement caused Browne some concern. A parachute mine had exploded overhead and Manquet slept through it. He wryly muses in his own account ‘I wonder how many people can say that a land mine exploding over-head failed to wake them up. I can now claim that distinction’. He recalls being woken by Browne to crashing noises, with stuff falling everywhere and dust heavy in the air. 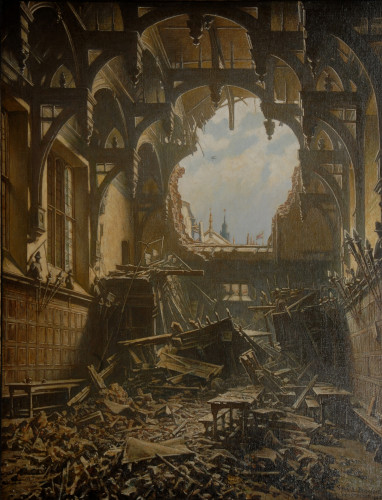 From this point on the recollections of the two men about the night significantly diverge. Browne recalls that after escaping the basement, they heard Mr F.O. Levy, a shelter warden, calling for help. He had been half-buried with several other people in a cellar at Elm Court and the Wardens were forced to cut them out with an axe. Manquet believes that during their escape from the building, the windows were blown out, giving Browne a concussion and forcing Manquet to escort him to the First Aid Post, from which he was transported to hospital. Browne places his injury as having been sustained on 8 December 1940, and other documentation within the Archive corroborates his version of events. He states that bombs had been falling very close to the Temple and after some let-up in the raid he and Manquet decided to go to the Mess under Middle Temple Hall for a cup of tea. He was interrupted in the act of pouring this tea by a parachute mine falling in the Gardens. Manquet ducked under the table, but Browne was not fast enough and was hit in the head by flying debris. He was put on a stretcher to await an ambulance, but in his confusion got up and walked across Middle Temple Lane and collapsed. He spent two weeks in hospital recovering from this injury. 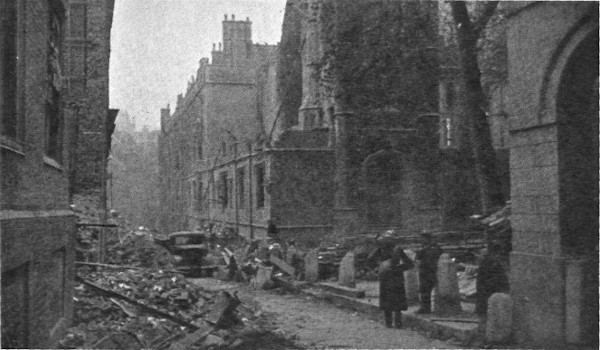 The night of the 10 th May 1941 was one of extreme destruction for the Temple and the subject of the full nineteen-page account of Beecher Moore, Warden and later a very influential figure in the development of dinghy sailing. Moore’s account manages to communicate the relentlessness of the attack, fraught with large numbers of incendiaries and destructive fires. A sense of helplessness is imparted by his account as he time and time again talks about the lack of water available for fighting the fires. All the Wardens could do was to try and save as many human lives as possible and rescue the contents of buildings, while trying to do anything possible to prevent the spread of the flames. He writes ‘Fires were all around the Temple, on both sides of the river. The Temple Church was burning, so was Brick Court, and at 2 o’clock in the morning it was as light as day’. People in air raid shelters had to be moved twice, once due to an explosion in Brick Court, and once due to an unexploded bomb in Middle Temple Garden. That night also had a great impact on Moore personally as a new factory that he owned in St Bride’s Street was destroyed and he was forced to continue production in their air raid shelter under railway arches. 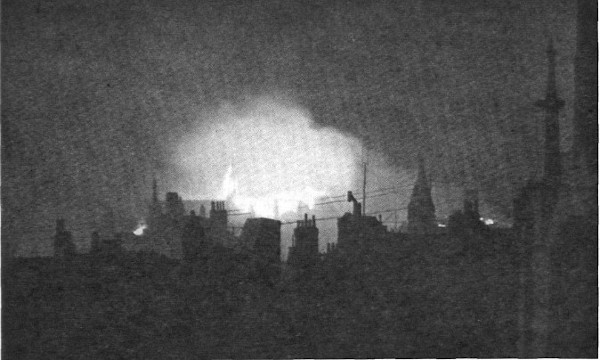 View of the burning roof of Temple Church, May 1941

C.J. Liddell-King, who served as a fire watcher at the Temple, provides an account of the aftermath of the night of 10 May 1941. His self-effacing and modest account of his contributions to the war effort start with him falling out of bed on the first night of air raid sirens at the Inn ‘stamping into the passage (knocking over and damaging a fine cut-glass candlestick in the process), and yelling “Air raid alarm!’ (in case any hadn’t heard). And the biting freshness of the night air as we joined the stream of residents hurrying up to 5 Essex Court. And then the discovery that the reason Middle Temple Lane had seemed so peculiarly hard to my feet was that I had dashed up it in my socks!”. Liddell-King occupied chambers with his father in Lamb Building, which ‘appeared to have miraculously escaped the burning ruin which spat and cracked on all sides’. 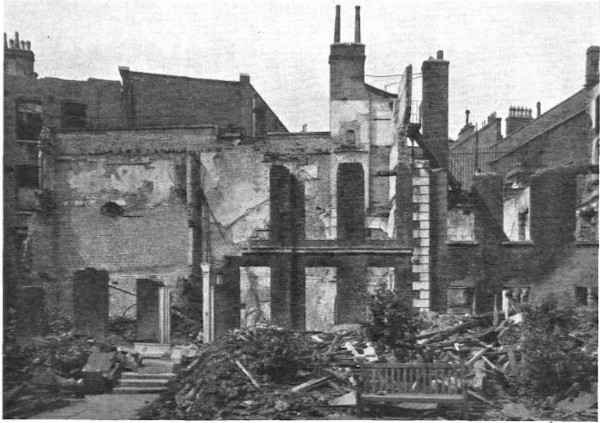 Liddell-King’s father returned to their chambers, had a cup of tea, inspected the building for fire and was just about to retire to bed after inspecting the building a final time when he discovered a chamber in flames on the top floor. After he had informed the Inn’s fireman of the blaze, ‘Benvenuto (our vast and amiable cat) was once more thrust into his basket, the offended canaries were scooped up, and presently we were again making our way across the acridly smoke-charged forecourt!’ 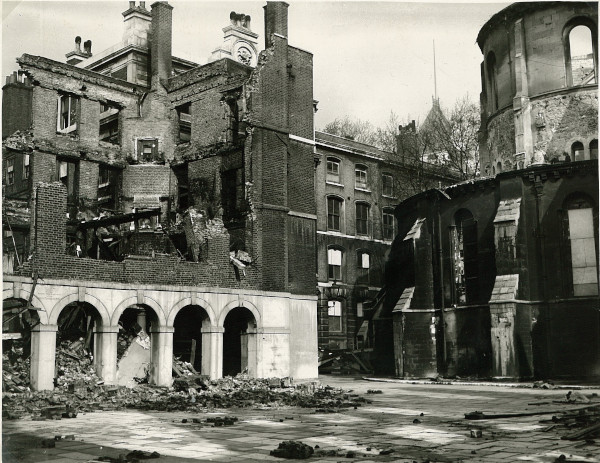 Destruction at the Cloisters and Temple Church, 29 May 1941

Meston, a fire watcher who may have been Dougall Meston, 2 nd Baron Meston, began his duties in October 1943 after German efforts to bomb London had subsided somewhat, and did not experience an incident in the Temple until six months had passed. In 1944 the Germans began using V-1 flying bombs, also known as ‘doodle bugs’ and in late summer of that year one of these bombs hit the front of Electric House on the Victoria Embankment. Damage was done to the Temple buildings on Essex Street and to Meston’s own chambers at Fountain Court. 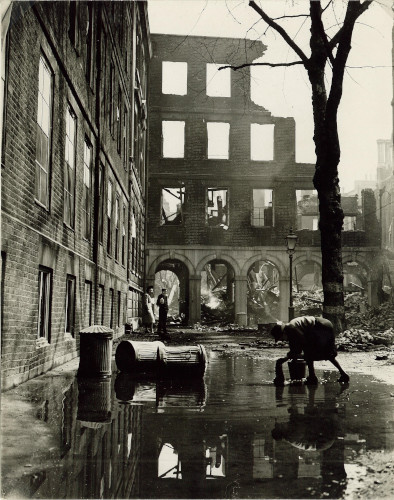 A few weeks later he was on duty in the Section Post and remembered that they ‘watched the succession of red glows in the sky made by these infernal machines as they came over from the south’. He and several of his colleagues ‘went downstairs into the passage which led along to the First Aid Post. About a minute later the passage shook as if it were a torpedoed vessel. On emerging from the passage and going out into Brick Court one saw a pall of black smoke over a building which appeared to be at the entrance to Essex Street’. The spot that Meston mentions had received a direct hit from a V-1 and most of the buildings on the west side of Essex Street were demolished by the blast. Some people had been drinking in the Essex Head tavern at the time – fortunately on the opposite side of the street to the explosion, and ‘some glasses were broken and beer was spilt, but no one was injured’. 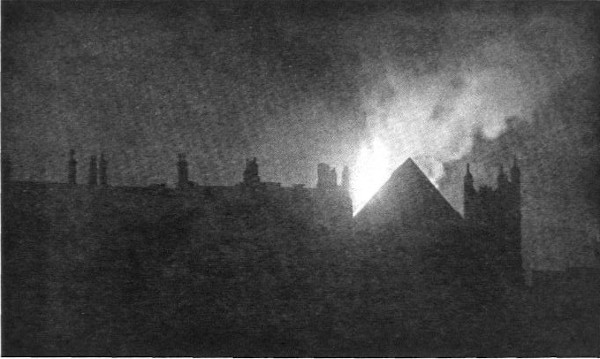 The events of World War Two affected those involved in the civil defence of the Temple in very different ways. Some, like Moore, found it hard to return to the traumatic events of the Blitz, writing that he did not see ‘. . . why anyone should wish to hear about or be reminded of the events of that night’. Some, like Meston, came away with fonder memories. He finishes his account by stating ‘the end of the war and the cessation of watching duties caused almost a pang of regret. The pleasant gatherings, the long talks on putting the world right, the endless cigarettes smoken, the quiet dinners, and numerous cups of tea and coffee throughout the night – all were over. The siren, the sleeping in one’s clothes, the somewhat dusty atmosphere and the rather tired feeling next morning – especially if one had to conduct a heavy case – are forgotten, and fire-watchers carry away memories of happy companionship through the long nights of waiting for bombs in the Temple.’ Regardless of the differing emotional impact the events of the Second World War had on them, it is beyond any doubt that the Middle Temple continues to owe a great debt to all the men and women that worked tirelessly, in very dangerous circumstances, in its defence.