The Middle Temple has existed as an institution for over six hundred years, and in that time has faced a vast array of challenges, difficulties and unexpected incidents. This month, we comb through the historical records to reveal in rich detail what captured the interest and attentions of the Middle Temple at a specific point in its history, and shine the spotlight three centuries into the past, on the eventful year of 1718-1719. 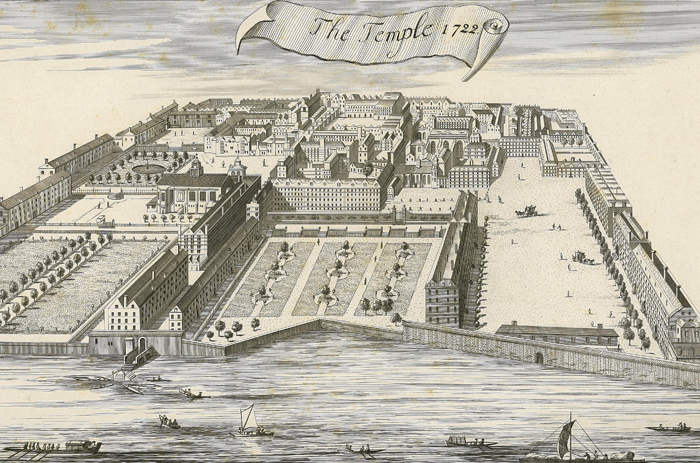 One of the most important issues addressed by the Masters of the Bench at the first Parliament of the new legal year on 24 October 1718 was the huge debt accrued by gentlemen and owed to the Inn. Every term gentlemen would be charged a sum for Commons taken in Hall. If they did not dine in Hall, they would be charged a smaller sum for Absent Commons. Gentlemen frequently had to be pressed for payment, but in 1718 the debt was particularly large. A schedule presented by the Steward gave the sum of £703.02.02 as the total debt due to the House. An unpaid debt of this size was alarming as the as the Society in turn owed £708.00.11 to their suppliers for food expenses. To put this sum in perspective, the total annual turnover for the Inn from 1718-1719 was £2092.19.07, so this placed a large strain on its finances.

In response to the debt owed, Parliament ordered that the Chambers of gentlemen who were indebted for 40s. upwards, or who had been indebted with smaller sums for a long period, were to be padlocked up or that their guarantors, otherwise known as ‘sureties’, were to be contacted regarding the arrears. The Minutes of Parliament for the year report several gentlemen having their chambers locked up and seized due to unpaid debts. 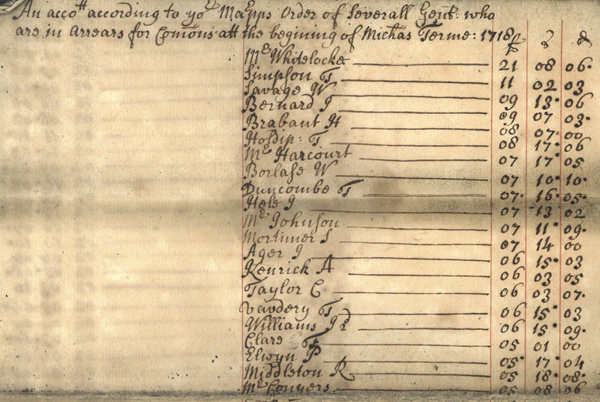 Account of gentlemen in arrears for Commons, Michaelmas 1718 (MT.7/CAS/7)

While the Benchers stripped certain members of their chambers, other more nefarious individuals sought to strip them of their possessions. The diligence of the Middle Temple staff was crucial in preventing crime in the Inn, with the Porter and those that served under him playing a large role in maintaining the security of the Society. They were well rewarded for their vigilance - an Order of Parliament of 29 May 1719 granted the Porter’s Assistant, John Brooks, 20s. for his diligence in seizing and taking a man named Davis into custody on suspicion of a design to break open some Chambers on 22 nd May. Davis was found equipped with many dangerous tools that that could have been used to commit burglary.

After Davis was taken into custody, records indicate that Isaac Jackson, the Under Treasurer, was charged with making enquiries about the miscreant and committing him to the compter, a type of small prison. His failure to commit larceny might have saved him from a terrible fate – the crime carried a death sentence if the goods stolen exceeded a certain value.

Under Treasurer's bill for transporting and making enquiries about Davis, 1719 (MT.2/TAP/46)

The staff of the Middle Temple had to be careful to maintain their vigilance for reasons other than potential burglary. Foundlings were an ongoing issue at the Inn, obliged as it was to take care of any child left abandoned on its property. Desperate parents would attempt to leave their children in doorways and staircases, hoping to transfer responsibility of the infant to the Society. By 1718 the Inn was maintaining five children and on 17 December another one was abandoned on the premises. A petition from the father was left with the child stating that he was ‘well educated in the law but thro' a series of misfortunes is rendered incapable to maintain this infant, and so obliged to expose him after this indecent manner (to your petitioner's unspeakable griefe and concern)’. This child was given the name George Temple, survived his childhood and was eventually apprenticed to a smith.

In response to this newest abandonment the next Parliament decided that two watchmen were to be appointed to go into every Court of the Middle Temple every hour of the night from 11 o’clock until 5 in the morning between Michaelmas and Lady Day every year and then until 4 o’clock from Lady Day to Michaelmas during the lighter summer days. One watchman was to cry the several hours of the night and the other was to frequently go up every staircase – staircases were often used as dark, secluded areas to drop off unwanted children without being seen. The watchmen only managed to prevent the abandonment of more children until 1720, when a further three were left on the property of the Inn. 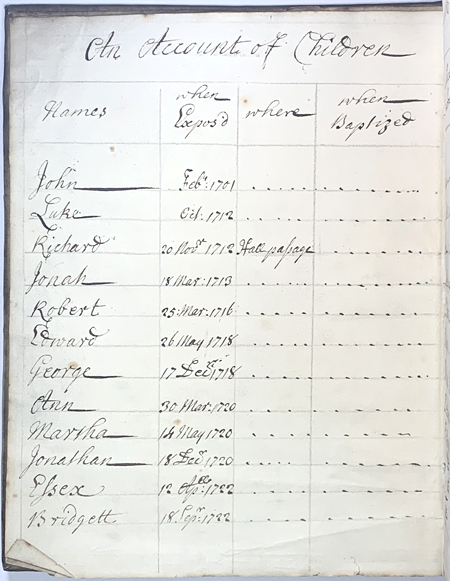 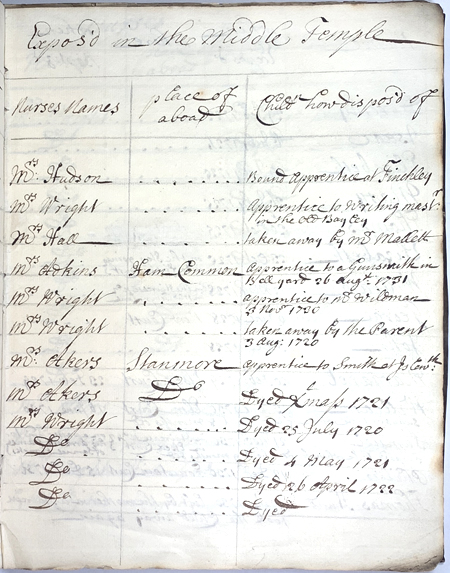 In addition to the new watchmen, the year saw two new appointments of workmen to the House. During 1718 two members of staff, George Wood the joiner, and Nathaniel Powell the plasterer, had died. Several workmen petitioned the Masters of the Bench for the new positions and it is interesting to see the comparative simplicity of these early job applications. The position of joiner was applied for by John Moreland and George Spencer. Moreland justified his application by stating that his house was as near to the Inn as the previous joiner’s, being at the lower end of Chancery Lane. Spencer argued that he had been foreman or chief workman under the previous joiner for the last eight years, during which period he had performed the majority of the joiner’s work himself, to widespread satisfaction. Unsurprisingly, being the candidate with the most experience and already having a relationship with the Inn, Spencer was granted the position. 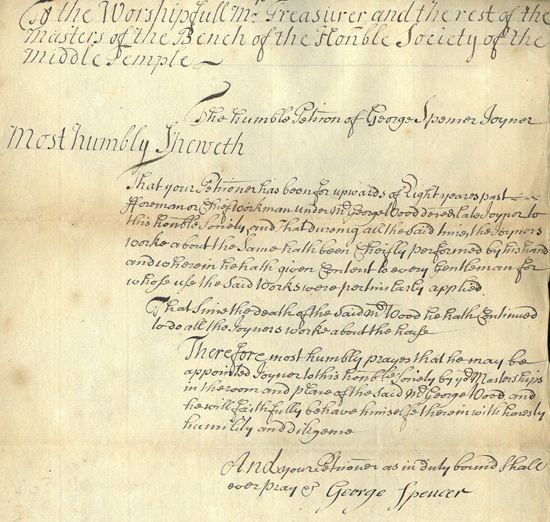 While able and diligent staff were a credit to the Inn, certain disorderly Middle Templars damaged its reputation. The behaviour of one particular member, Bartholomew Clouds, admitted in January 1716/17, caused particular consternation to the Masters of the Bench, and the matter was addressed in Parliament during three separate sessions from November 1718 to February 1718/19. A report in the Archive describes the troubles with Clouds in detail, showing that his background was far from respectable. He was formerly a footman of Sir Allen Broderick and later a pirate with his uncle or cousin.

His father, listed as Samuel Clouds, gentleman, in the admission records turned out to be ‘a poor miserable wretch’ who swindled his landlord and all others. He tricked Chelsea Hospital seamen out of their pension tickets and was committed to the King’s Bench Prison for three years. He obviously failed to amend his criminal ways and escaped to the West Indies in order to avoid a later sentence of standing in the pillory. Prior to his escape, he had a man called Cope advance his son some money in order to have him admitted into the Inn ‘to get a fortune and not to study’.

Clouds the younger did not use his opportunity in gaining entry to the Inn to improve himself. He had many creditors and the reputation of the Inn suffered for appearing to harbour such an individual. Against the rules of the Society, he earned money by sheltering shady characters and moved his mother and sister into his chambers up four flights of stairs at Elm Court. His mother made a living begging among the Quakers and his sister walked Drury Lane as a prostitute. Both of them left ‘all manner of filth in the Court’, often throwing it out of the window.

The Benchers took action against Clouds, ordering the removal of him and his family from his Chambers, and his attendance at the next Parliament to argue his case against his being struck off the Rolls of the Inn. As there is no record of him appearing at the next Parliament, it is likely that, being in the words of the report, ‘a person of scandalous character’, he was indeed expelled from the Inn. 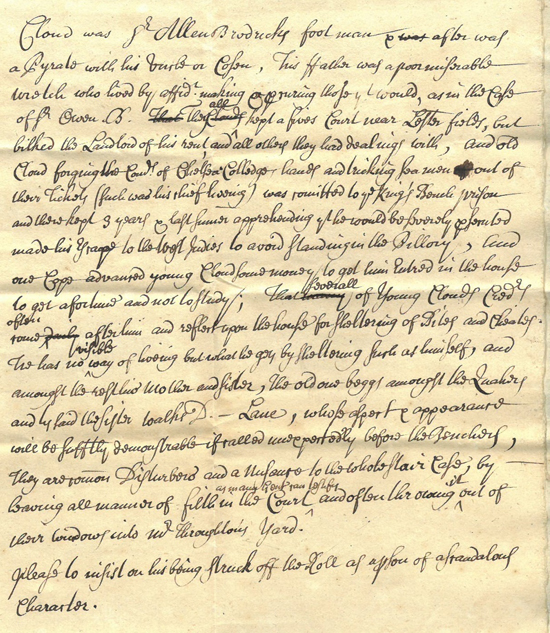 Report regarding the 'scandalous character' of Bartholomew Clouds, c1719 (MT.21/1/VII/XIV/1)

The disposal of rubbish and filth was an ongoing issue in the Inn, and not just a problem caused by the disreputable among the Middle Templars. In Parliament on 13 June 1718 it was reported that ‘great quantities of rubbish lie upon several parts of the buildings of this Society, occasioned by the employment of foreign workmen… which does much damage by stopping the gutters and drains for carrying off the rain water’. A report of 26 June 1718 shows that that the ceilings, gutters and staircases of many chambers were still filled with rubbish after the previous Parliament. A further note at the bottom states that at 1 Middle Temple Lane ‘closed stools [toilets] erupted and much nastiness very offensive’.

The occupants had obviously failed to pay the night soil men and the Inn was left to deal with the mess. In Parliament on 27 June every person inhabiting Chambers was charged to remove rubbish from the gutters on pain of their Chambers being seized and locked up. In the first Parliament after the Long Vacation on 24 October 1718, the Under Treasurer was charged to examine the gutters and make a report of those that had still not abided by the orders of the Inn. By the Parliament of 28 November 1718, the Inn had decided it would be easier to clear the rubbish themselves and the charges for this work were billed to the relevant chambers, no doubt adding to any existing arrears. 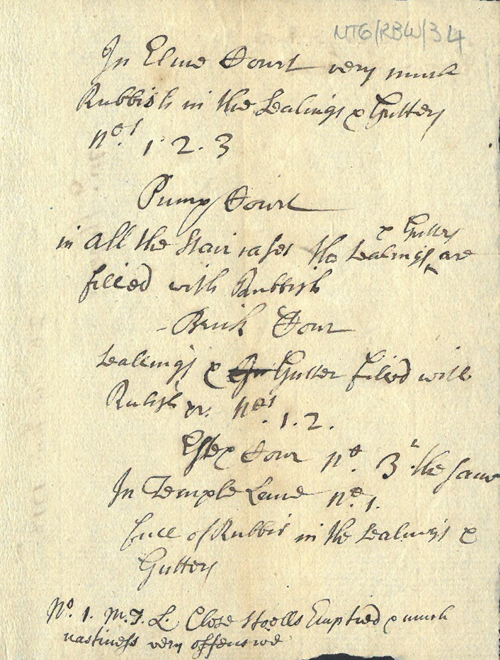 The Middle Templars of three centuries ago lived in an environment peppered with intrigue and controversy, as this snapshot of one year’s documentary evidence suggests. While in 2019 the challenges may have changed – and the plumbing happily improved – the Inn is still an eventful place to be, and will no doubt continue to be for years to come.