Music, while not always the first string to a barrister's bow, has long been a part of life at the Inn - Middle Templars' study, practice and interaction has gone hand in hand with a rich musical tradition for centuries. However, music has not always brought harmony to the Inn or its members - here we look at some of the high notes and points of discord in the history of music at the Middle Temple.

The Inn of the early centuries certainly appears to have been a musical place. Fortescue relates that the curriculum studied by young Middle Templars did not include only the law, but also history, as well as 'the lighter accomplishments of singing, dancing and all kinds of music'. Early records bear out this impression of a musical Inn. Many receipts, for example, survive for payments made to musicians for their services here, including from the celebrated lutenist and composer John Dowland, whose work is still much performed today. This receipt, signed by Dowland, 'Lutenist to the King's Ma[jes]tie', is for £5 received for 'the consorte p[er]formed before the judges and Reverend benchers' at Candlemas 1612/13. 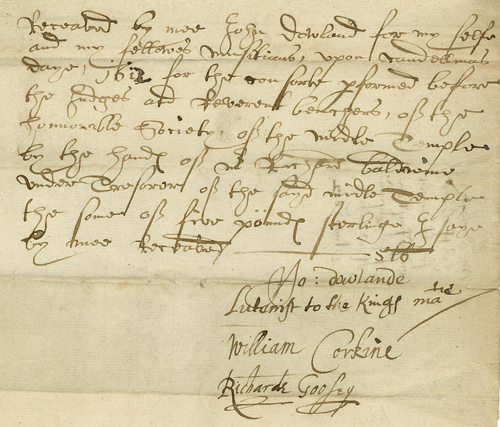 Receipt signed by John Dowland for £5 received for music performed at Candlemas 1612/13 (MT.7/GDE/3)

However, tastes changed as England became more puritanical, and the governance of the Inn began to follow the trend. The Minutes of Parliament record that, after Christmas 1631, several members were fined for forming their own Parliament over the festive season, and passing an order 'to drink healths in Hall with loud music', against an earlier order of the Bench. On 25 November 1642, the Bench ordered that Christmas be kept 'w[i]thout any Musicke, Gaming or any publique noise or shewe... in respect of the Danger & troublesomnes of the times'. The English Civil War had, of course, broken out just three months earlier.

The national mood had changed a little by 1665, following the Restoration of King Charles II, and owing to the good behaviour of the Middle Templars over Christmas, Parliament voted to allow them £6 12s for 'music and torches'.

The strong musical tradition at the Temple Church was, as now, never far away for Middle Templars, and the rich history of the church's choir and organ will deservedly be covered in a future edition of Archive of the Month. The archive holds a number of beautiful volumes of church music from the choir's collection, including a 1716 edition of the 1693 Harmonia Sacra: or, Divine Hymns and Dialogues. 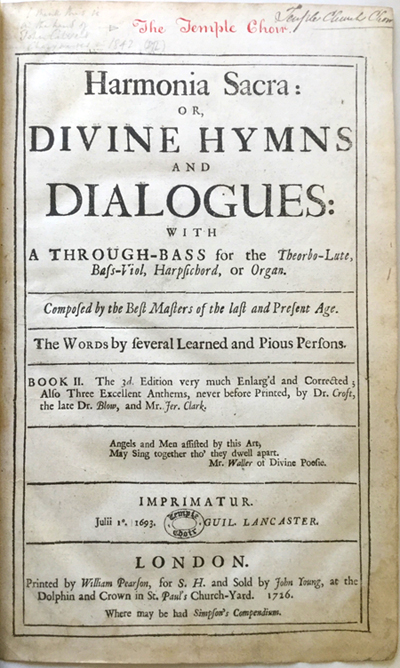 The organ at Temple Church, in its several incarnations, has long been the centre of comment, discussion, intrigue and controversy, not least for the saga known as 'The Battle of the Organs' in the 1680s, when both Temple Inns (somewhat stubbornly) installed an organ in the Church built by their preferred master craftsman. Not much later, the new organist Mr Piggott was chastised by the Benchers for negligence of his duties - he had been 'placing boys and other unskilled persons to play the organ in his place'.

Music continued to cause controversy in the following century. In 1758, a complaint was made to Parliament by one Edmund Jenings, a barrister of the Inn. His downstairs neighbour, a certain Mr Arne, a 'common musician for hire', was 'making an incessant noise either instrumental or vocal and sometimes both', making it impossible for Jenings to 'pursue his studies under such circumstances'. He called upon the Bench for redress. Arne was summoned to Parliament, but failed to appear; his chamber was seized from him. It is very tempting to surmise that this Mr Arne was, in fact, Thomas Augustine Arne, the composer of Rule Britannia and God Save the King. 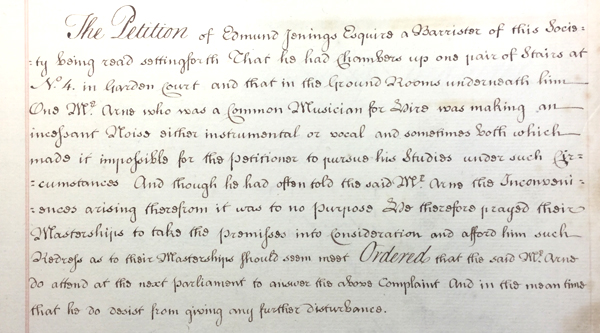 In 1806, Parliament received an anonymous letter, which enclosed the words to a song 'to be sung on the first day of term, or at the goose feast for the edification of students'. Through this work, entitled 'A Foolish Song', the writer hoped that 'the morals of the young gentleman are improv'd' and that they might, 'tho drunk or sober', thus be able to 'rightly proceed to chambers without molestation'. The song begins:

Law students are taught not by reason & thinking
But in common Hall by good eating & Drinking,
Best Digest of Law – a culinary book
Where merit is judged by chief butler or Cooke.

and continues in a similar vein. It is unknown whether this song was ever in fact sung on the first day of term, or at the 'goose feast', or on any other occasion. 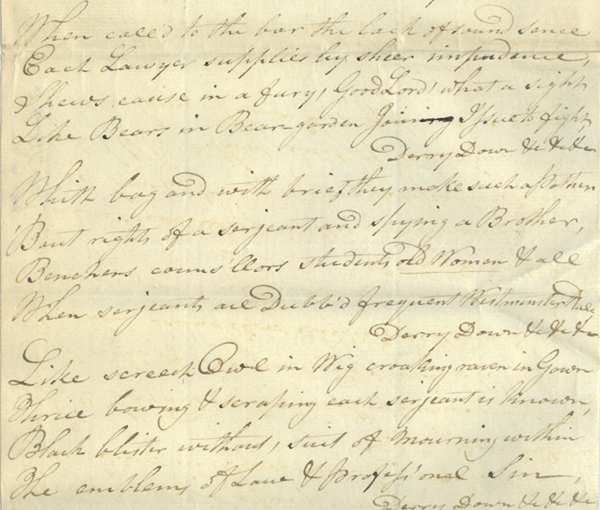 In 1896, a 'Smoking Concert' was given by the Inns of Court Rifle Volunteers (later the Inns of Court Regiment) in Hall. Smoking concerts (or 'smokers') were performances, usually with an exclusively male audience, at which the audience would smoke and discuss politics to a background of musical entertainment. This occasion featured a range of musical treats, including songs performed by Sergeants Eastwood, Hole & Williamson, a recital of 'The Lost Hat' by Mr John Proctor, and 'Humorous and Musical Selections' performed by Mr George Grossmith, the comedian, actor, composer and author of the still-popular comic novel The Diary of a Nobody . The pianist that evening was a certain Mr Henry J. Wood - later Sir Henry Wood and the co-founder of the Proms. 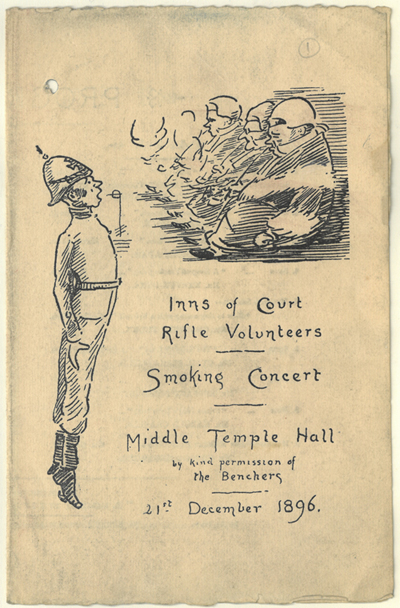 From 1898 until 1923, the composer (and future Master of the King's Music) Sir Henry Walford Davies served as organist and choirmaster at Temple Church. 1905 saw a particularly memorable musical occasion at the Inn when his cantata 'Everyman', based on an old morality play and thought to be his most accomplished composition, was performed in Hall on 24 March, conducted by Davies himself. 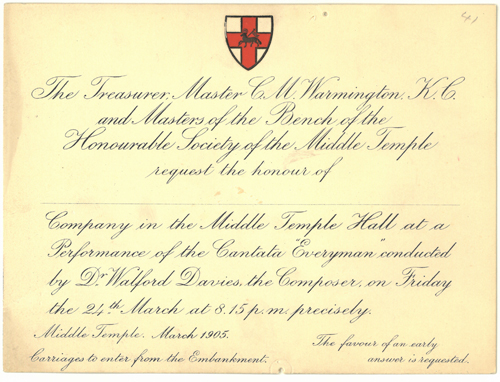 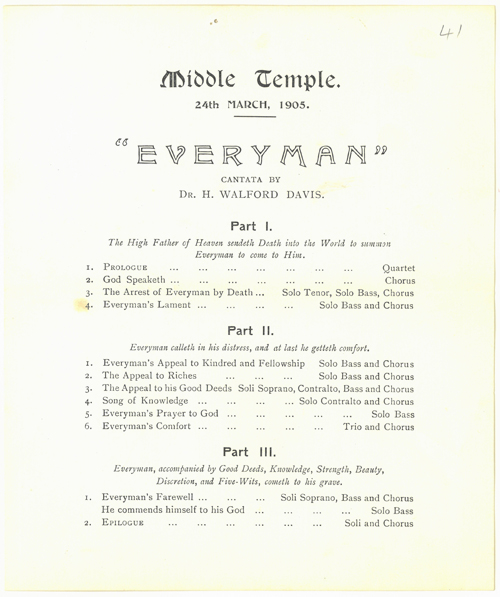 'At Home' events were a popular feature of life at the Edwardian Middle Temple. These afternoons of summer entertainment included music in the garden and the Hall, usually performed by military bands and other special guests. 1903 saw the 'Montagu Spanish Minstrels' entertain the crowds, and in 1909 those not wishing to hear the band of the Coldstream Guards in the garden could enjoy 'The Folk Singers' in Hall, who shared the stage with the choristers of Temple Church. 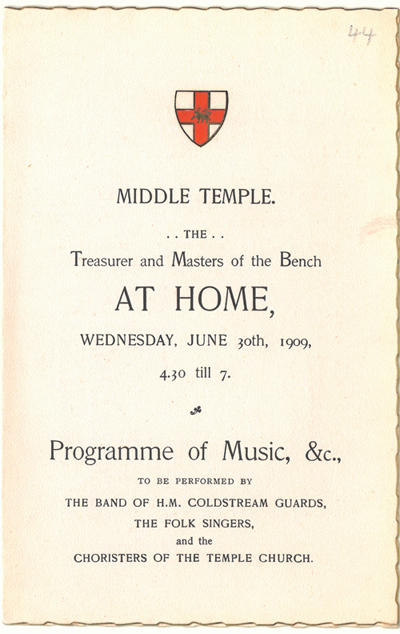 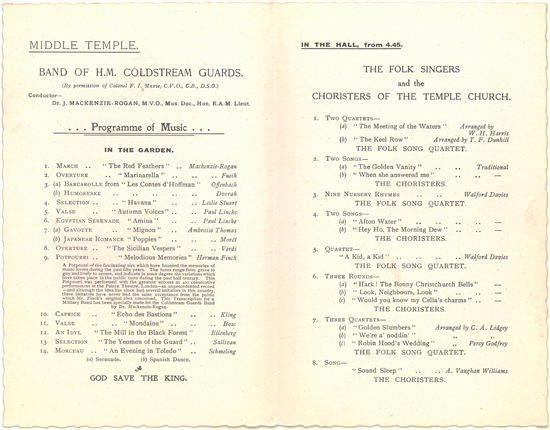 The outbreak of the First World War irreparably changed life at the Inn and across Britain, and the peaceful, genteel Edwardian World of 'At Homes', balls and smokers might have been thought lost forever. Nonetheless, music continued to play a role at the Inn. In 1916, a concert was given in Hall for wounded soldiers, with songs performed by the choristers of Temple Church, alongside the 'Male Voice Choir formed for Music in War Time'. This concert, which included patriotic songs from across Britain and its Dominions such as 'Land of my Fathers' and 'The Maple Leaf For Ever' as well as popular folk and military songs, was conducted by Dr Walford Davies. 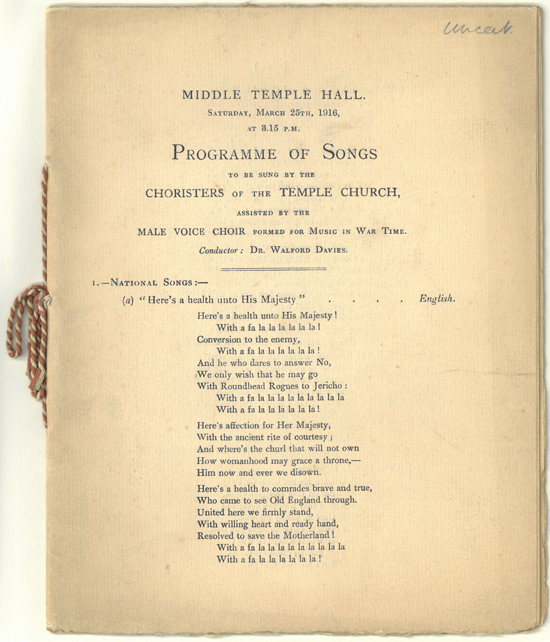 Walford Davies' successor as organist and choirmaster at Temple Church, George (later Sir George) Thalben-Ball, served in the post for nearly sixty years, from 1923 to 1982. In the same year he retired, after a tenure in which he had brought the choir to worldwide fame, he was commissioned to set the Graces said in Hall to music. His handwritten and signed manuscript for these survives, as does a memorandum from the Under-Treasurer, Captain Morison, suggesting that the manuscript be kept in the archive, 'like Beethoven's and Motzart's [sic] original scores!' 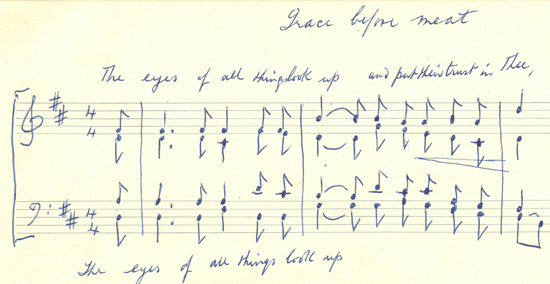 Section of George Thalben-Ball's manuscript composition for the 'Grace before Meat' (MT.7/GRA/1)

Music continues to play a major part in twenty-first century Middle Temple life. The Scholarship Fund has benefited from events such as the concert given by the Elias Quartet in 2010 and the 'Musical Evening with John Dyson and Friends' in 2017. Last year's semi-legendary karaoke night and this month's 'Rock the Temple' concert are just two of the latest examples of this diverse, long-lived and rich tradition. 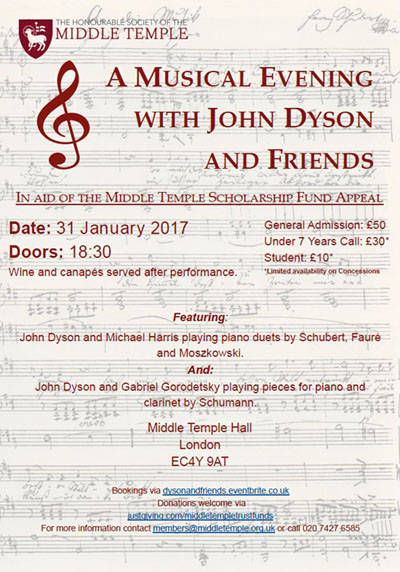