Skip to main content
Home » Library » History of the Library

History of the Library

The library at Middle Temple was re-founded in 1641 when a long-standing member of the Inn, Robert Ashley (1565-1641) bequeathed his own collection of around 3,700 books, and £300 to employ a Library Keeper. Librarians have been recorded in the Inn’s Bench Book since 1643. The first printed catalogue was issued in 1700. Details about this work, and a scanned, downloadable copy can be viewed here.

The collections were then developed by subsequent donations and acquisitions. Today the Library holds approximately 250,000 volumes of textbooks, law reports, journals and Parliamentary papers and is one of the most important legal libraries in the country. While the collection consists predominantly of legal material, there is still a wide range of subject matter available to consult, including works on geography, topography, philosophy, theology and literature. This is due to the manner in which the collections were developed during the 17th, 18th and 19th centuries and to respond to the needs of the barristers and students. Legal education during these periods was more wide-ranging, but this changed in 1852 with the establishment of the Council of Legal Education and the introduction in 1872 of compulsory examinations for the Bar. At that point the Library started to focus its collecting policies primarily on legal works. This coincided with an expansion in legal publishing and the introduction of the official series of the Law Reports. 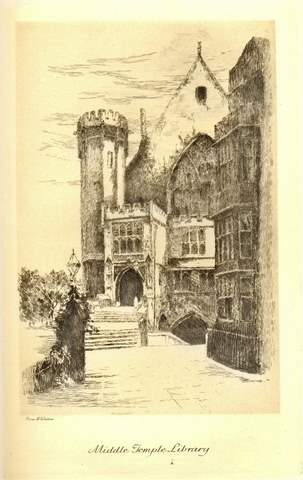 Exterior view of the 1861 Library

Over the centuries, the Library has been housed in various locations throughout the Temple. It was first located in chambers to the left of the original Hall entrance. In the 19th century it was moved into purpose-built rooms. These became the Parliament Chamber when a new purpose-built library was opened by the then Prince of Wales in 1861. That building was damaged beyond repair during World War II and had to be demolished. The entrance stairs can still be viewed on the western side of the garden. The library’s current building was designed by Sir Edward Maufe, who also designed Guildford Cathedral, and was opened by Her Majesty Queen Elizabeth The Queen Mother in 1958.

Sir Edward designed a building that would be able to withstand potential damage and used reinforced concrete in its structure. This was both fortuitous and farsighted, as the strength of the building’s walls and floors allowed a new floor to be added in the loft in 2007. This floor now houses the Inn’s archive, and rare book and manuscript collections, in a secure, environmentally-controlled storage facility.

The Library holds one of the largest and most useful collections of American law outside of the United States. Many volumes were donated in the 20th century by the Carnegie Foundation, FOLAL and the American Ambassador, the Hon. W. Aldrich.

For more download a guide to the history of the library below.