The year 2019 marks the centenary of the first admission of a woman to an Inn of Court and much has been written celebrating the achievements of female pioneers in the legal profession. Prior to the admission of women into the profession, however, they were still a part of the life and culture of the Middle Temple. As a result of the dominance of men in the administration of the Inn until the 20 th century, there are very few archival records relating to women prior to this time, and when they exist they are usually written from the perspective of men. Despite the limitations of the records, it is still worth examining the role of women at the Inn and attitudes held by the administration and members towards them.

In 1903, when considering the application of Miss Bertha Cave to be admitted as a student to Gray’s Inn, the Lord Chancellor stated that ‘nobody ever dreamt that a lady would asked to be admitted to the Inn, or there might have been rules on the subject’. The concept of women entering the profession was so outrageous, that restrictions on their admission were never explicitly created, though there were other restrictions placed on the presence of women at the Inn over the centuries. The first example of this can be found in a letter to King James I, written by the Treasurers of the Temples on 13 May 1613, regarding the recommendation by the King of Alexander Simpson to the non-existent position of Lecturer. In it they state that ‘… single men have some time been contented to be with us till they may see better advancement, but for such as are married the customs of these Societies have ever been against them, not enduring women and children to reside amongst us’.

Extract regarding women and children at the Inn from a reply to King James I’s letters on behalf of the Reverend Alexander Simpson, 13 May 1613 (MT/15/1/TAM/21)

Until around 1650 there is no evidence that gentlemen found it difficult to abide by the custom that forbade the residence of women and children in chambers. From 24 May 1650, however, orders start to appear in the Minutes of Parliament demanding the removal of families. One particular instance of this can be found a minute dated 2 June 1654, which orders that ‘all women and families shall remove by Thursday 8 June’. It is clear that this order was ineffective as another was issued on 24 June 1654 stating that ‘Any one permitting a woman to lodge in his chamber after Michaelmas, shall forfeit it ipso facto’ . By November of that year, the Benchers were obviously getting frustrated by the refusal of members to abide by their restrictions, as they issued another order stating that ‘All persons. . . who shall not remove their wives women and families before St. Thomas’ day, shall be expelled, and the chambers be forfeited’. Despite the seriousness of the penalties, members persisted in keeping their wives and families in their chambers and orders continued to be issued prohibiting them until around the 1730s. 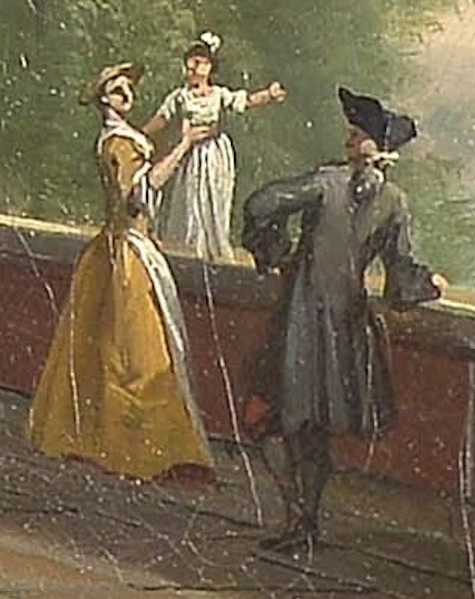 A family overlooking Middle Temple Garden from Fountain Court, 1738. From the painting ‘Fountain in the Temple’ by Joseph Nickolls

On 15 April 1737, a comprehensive survey was commissioned by Parliament to establish how many family member of tenants were living in chambers of the Inn. This was completed on the 21 June of that year and reveals that there were seventy-two family members living in chambers, twenty of which were children. It appears that this survey may have heralded a turning point in the Inn’s attitude to women and children. By 23 November 1744, a Porter was allowed to keep his wife in his rooms in Pump Court, contrary to an order of 1 May 1727 that ‘no officer of the House shall keep a family in any Chamber in the House’. By the early 19 th century this change in attitude was fully in evidence. An order of Parliament of 23 January 1807 relates to two gentlemen with large families lodging in their chambers. The chief complaint of the Society was that they were throwing large quantities of filth and soil from the windows, not that the families were present in chambers – they would be allowed to remain if they ceased causing a nuisance.

Survey of proprietors and tenants of Middle Temple chambers including families and children, 21 June 1737 (MT/21/2/20/SP)

The Inn disliked women living in chambers, but they were content to employ them in menial roles. A comprehensive report produced regarding the Middle Temple during the reign of King Henry VIII indicates that at this time the Inn employed a laundress as its sole female servant and that the duties of the laundress were washing the clothes of the house. The employment of women at the Inn expanded to include a female dishwasher in the 1660s. Laundresses continued to be responsible for cleaning the table linens throughout the 17 th century until the name of the role changed to ‘washerwoman’ in the 18 th century. At this time a distinction opened up between the role of ‘washerwoman’ and the role of ’laundress’, which evolved to encompass the job of a cleaner - in 1738 the Inn began to employ a separate woman, Elsabeth Martin, for cleaning the Library and Parliament Chambers under the job title ‘laundress’.

The Inn directly employed a few women, but more found employment from tenants within the Temple precinct. Laundresses were employed to clean chambers and complaints against them were often brought before Parliament. A recurring problem, brought to the attention of Parliament in one instance on 31 May 1717, was that laundresses ‘… throw out of the window, filth, and empty slops, stools, and other nastiness in the several courts of this Society’. They were also in the habit of creating fire hazards by carrying coal ashes down from chambers and leaving them in lower corridors and cellars. On one memorable occasion in 1720, many of them had managed to obtain keys to the garden to gain access to the water pipe there, and were accused of breaking the pipe and cock, which caused the garden to flood. After this incident, access to the keys was restricted to the gardener. 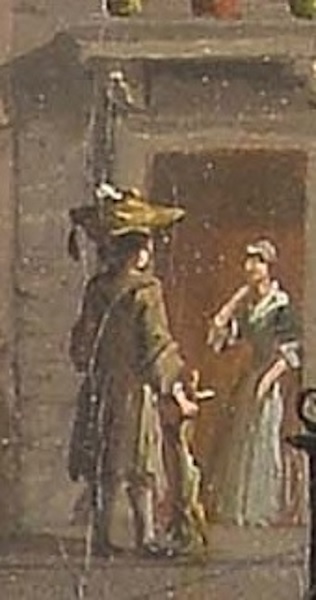 A woman accepting a delivery of game in Fountain Court, 1738. From the painting ‘Fountain in the Temple’ by Joseph Nickolls

Sarah Pope was one woman who had worked as a laundress in the Temple during her lifetime. Her husband, William Pope, a waterman who would have carried passengers on the river, was granted a twenty-one year lease of two underground rooms in Middle Temple Lane in 1689, which was renewed in 1710. Both she and her husband fell on hard times in later life, and on 6 February 1718/19 she petitioned the Society for aid, as she was ‘by reason of misfortunes in so low a condition as not to be able to bury her husband or support herself’. It was not uncommon for the Inn to grant charity to the widows of employees or tenants, and Mrs Pope was granted £5 and the liberty to bury her husband in Temple Churchyard with no fees. The extent of the Inn’s charity did not end there – by 1720, she had fallen into arrears on her rent and the Society remitted any further payment of rent, as well as around six months of arrears. She was also granted a monthly allowance. On 16 June 1727, ‘lying bedridden and being very weak and infirm’, Mrs Pope was granted a further allowance and money for a nurse to look after her. She did not live much longer after this allowance was granted and was buried in Temple Churchyard on 30 June 1727.

The Middle Temple welcomed the respectable employment of laundresses and washerwomen, but there was one class of women that was completely unwelcome - so called ‘lewd women’. The primary method that the Inn used to discourage them was by restricting the entry of women after a certain hour. In order to prevent the discrete transportation of prostitutes in and out of chambers, a ban on Hackney coaches within the gates of the Temples after 11 o’clock at night was proposed in 1714. Restrictions put in place did not prevent members from attempting to flout the rules, and this led to violence on several occasions. A complaint submitted to Parliament by the Chief Porter in 1717 states that he attempted to refuse entry after 12 o’clock at night to a Mr Mark Hill and an accompanying woman. As a result, he was insulted and beaten by the gentleman. He made the same complaint against two other gentlemen a couple of weeks later.

Despite the violent actions of some members, it appears that the presence of prostitutes was seen as an unpleasant temptation by a large proportion of the membership. A petition was submitted to Parliament in the late 18 th century by barristers and students requesting that an additional watchman be appointed to attend all night at the wicket of Devereux Court to save the barristers from the place where ‘Circe her nocturnal revels keeps administering her poisoned cup… her votaries those evil things that walk by night in trim disguise, fair in appearance only foul within, empty of every good, yet blythe and gay’. The petition begged the Benchers to ‘remove us from these objects that with shame we must confess have sometimes created pleasure, but oftener pain’ and stated that the additional watchman would help them ‘turn away from the hitherto unavoidable Road of Impurity and Disease’.

Poem in a petition submitted to Parliament by barristers and students, late 18 th century (MT/3/MEM/55)

For much of the history of the Middle Temple, the presence of women was discouraged. The Inn allowed their employment in menial and traditionally feminine professions. Until the 18 th century, there were heavy restrictions against even respectable wives lodging within chambers of the Inn and prostitutes were positively demonised, being seen as nothing more than objects of temptation leading otherwise respectable men astray. There was some limited progress in between the 16 th -18 th centuries, with women eventually being allowed to stay in chambers, but there was a great deal more progress to be made in the 19 th and early 20 th centuries.