11 November 2018 marks a century since the signing of the Armistice that ended the First World War after four years of horrific and exhausting global conflict. To mark the centenary of this watershed moment in history, this month we explore the various resources held by the Middle Temple Archive relating to the various barristers, students and members of staff of the Inn who fought or participated in other vital areas of war work.

Just over a month after the commencement of the war in October 1914, the Treasurer, Edward Tindal Atkinson, expressed his wish to obtain a complete and accurate list of members who were serving in the Armed Forces and created the 'Roll of Members of the Inn serving in the Imperial Forces'. This Roll provided the basis for the later 'Roll of Honour' created for the Inn after the war. Information for the Roll was obtained by giving notice to members asking for details regarding their military service.

Many wrote back in a series of letters from 1914 to 1918. These letters contain simple details regarding the writer's rank and regiment, but also provide insight into the very human concerns of the members - many students were worried about their education and progress towards Call to the Bar, and asked whether there were any special dispensations available for members of the Armed Forces. Often parents wrote on behalf of their sons - Master Lewis E. Glyn, a Bencher of the Inn, wrote on 3 November 1914 regarding a dispensation of dining terms for his son, C.R. Glyn, stating "I think it very doubtful if he could obtain any leave. Would you also tell me if students can dine in khaki undress!" 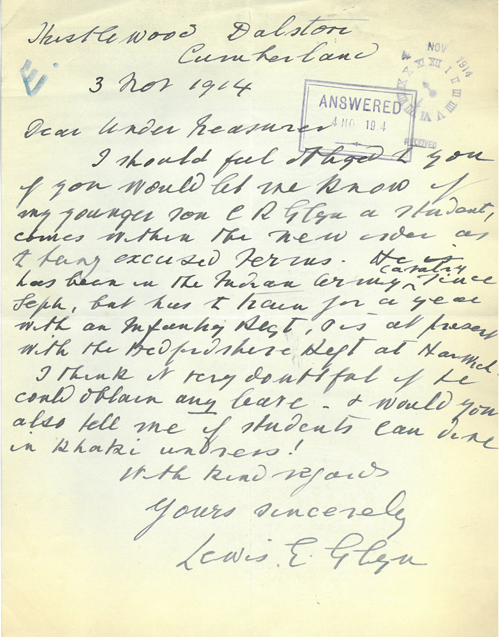 Letter from Master Lewis E. Glyn to the Under Treasurer regarding his son, 3 November 1914 (MT/17/REG/9)

The resulting volume provides a comprehensive record of all barristers and students in the Inn who served in the armed forces during this period. It lists their rank and regiment and records any fatalities, sometimes mentioning the cause of death or the theatre of war in which the men died. These records reveal that 491 barristers and students fought in the War and there was an 11.8% total fatality rate amongst Middle Templars. They also reveal that there was a much greater fatality rate among the students than the barristers, at 19.5% in contrast to 6.8%. It is highly probable that the students' youth made them more likely to be involved in dangerous front line fighting. 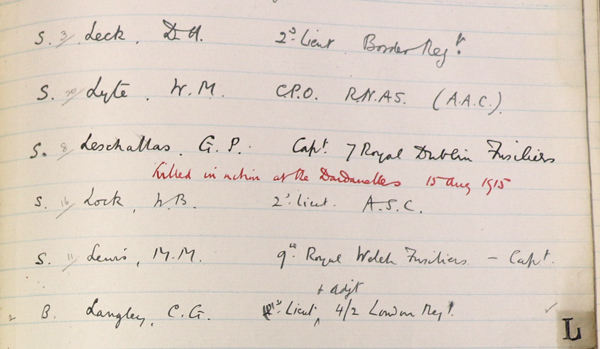 Obituaries of some of the Inn’s members killed during the war can be found in the Archive. Although many of them list the same general details about the individuals that can be found in the Rolls, some provide more poignant fragments of information. One such example is the obituary of Lieutenant Leonard Nithsdale Walford of the 12 th London Regiment (Rangers), a student of the Inn. His obituary states that he received the command to go up and support the 3 rd Monmouth Regiment and, there being a crest in front of his soldiers, Walford went forward to reconnoitre. When he hit the crest, a line of shells fell either side of him and one high explosive went off within six feet of him. He was never seen again.

On the death of a member of the Inn, it became commonplace for a Vote of Condolence to be taken by the Benchers at the meetings of Parliament. These condolences were made to the families of the barristers and students that had been killed, but also to Masters of the Bench who had lost sons. The aforementioned Master Lewis Glyn, who wrote to the Inn on behalf of his son, was one of the parents who never got to see his son return. He was killed in action in 1917. The Votes of Condolence usually only had to be made for one or two members per session. One of the most striking votes, however, was on 2 November 1916, the first meeting of Parliament after the summer vacation. Eleven men had died during that vacation time. This covered the period of the Battle of the Somme, which resulted in 419,654 British dead, wounded and missing. It is hard to imagine how the Benchers would have felt meeting for the first time after the Long Vacation with the battle still raging in France and very much feeling its effects in the list of colleagues whose lives and potential had been lost in the fighting. 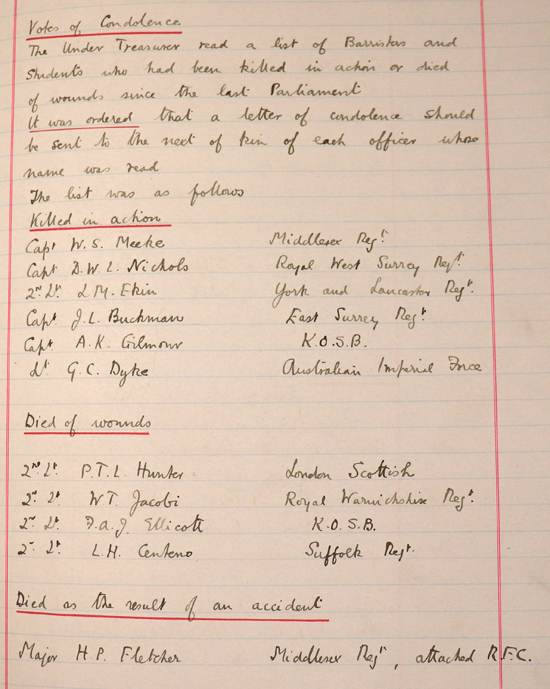 Of the 491 members who served in the Armed Forces during the War, 195 of these were students, and even more students were engaged in war work. Nobody knew how long the war would stretch out for, and it caused a huge interruption in the education of students, affecting their ability to be Called to the Bar. In order to accommodate the needs of students during the war, the Consolidated Regulations of the four Inns were amended on 13 May 1915 when it was clear that there would be no quick victory. These regulations provided rules for the education and Call to the Bar of students and also stated exemptions from the rules. In the case of Students who had been engaged in the Armed Forces or war work, they were allowed a dispensation from keeping all of the required twelve terms if they had missed terms due to military service or war work.

Regulations relating to military personnel in the ‘Consolidated Regulations of the Several Societies of Lincoln’s Inn, The Middle Temple, The Inner Temple and Gray’s Inn’, Revised 13 May 1915 & 22 May 1916 (MT/1/PPE Box 14)

In order to obtain a dispensation from keeping terms, students were required to petition the Masters of the Bench. A project is currently underway in the Archive to list the petitions of the Inn in detail – at the time of writing, the documents from 1872-1920 have been listed. These documents often contain details about the lives of students of the Inn. In order to justify their requests, they often provide their educational and career history, certifications, testimonials, details of family, illness, and of military service. While there are some petitions submitted during the war, the quantity is nothing compared with the flood of documentation generated after demobilisation in January 1919 when military personnel wished to resume their education and be Called to the Bar. This can be particularly useful when trying to discover the details of the war service of students who joined the Inn after the war, as they are not listed in either of the military Rolls of the Inn.

As well as providing information about military service, the petitions also detail the particulars of other forms of war work undertaken by students. One such member was William Dugdale Glyn, who applied in December 1918 for a dispensation of ten terms and of certain examinations. Glyn did not serve in a military capacity, having been rejected for medical reasons, but afterwards passed the fitness certification as a C.1, meaning that he was fit for garrison service at home camps. From January to May 1916 he attended daily as an unpaid recruiting clerk at the Carlisle Recruiting Office and later worked on the land under the War Agricultural Committee, which was classed as war work. 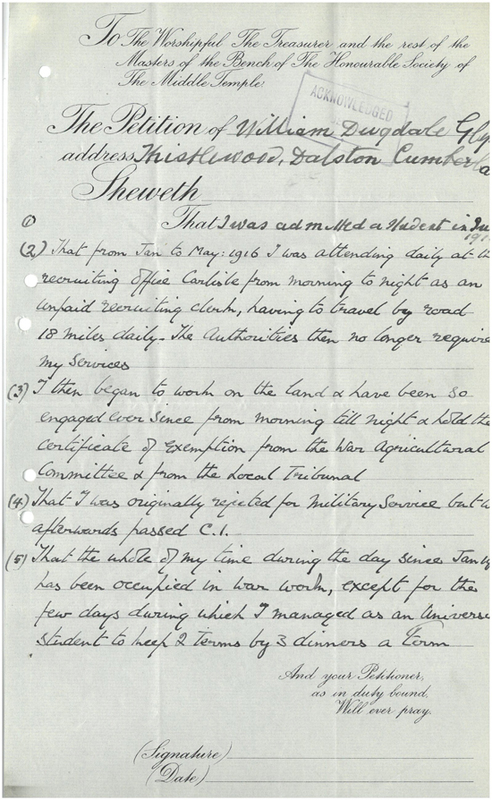 In addition to details about his war work, his petition contains some interesting details about his family and the condition of the Inn at the time - on 5 December 1918, Dugdale’s father was obliged to write in on his behalf as the whole of his household was in bed with the ‘flu. An accompanying letter from the Under Treasurer indicated that, owing to influenza, he was left practically without any staff at all. The influenza mentioned was probably the deadly epidemic known as ‘Spanish Flu’ that struck between 1918 and 1920 – this had an estimated mortality rate of 10-20%. The majority of deaths in London from the disease were recorded from October to December 1918, which corresponds to the date of these letters exactly, and implies that the Inn could have been badly affected by the epidemic. By looking at a Staff Book dating from 1885-1952 it is possible to tell that at least one staff member died during this period, though the book does not say whether or not this was attributed to influenza. 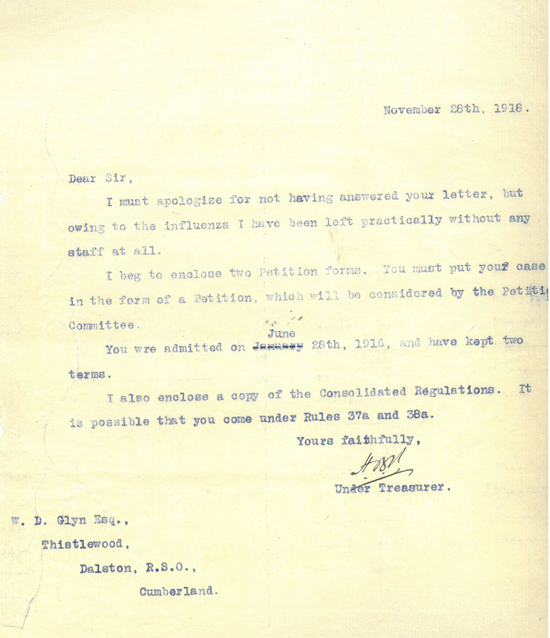 It was not just members of the Inn, of course, who contributed in these years - many members of staff participated in the war effort. The greatest quantity of archival documentation regarding the military service of any one individual in the Inn relates to Charles Hunt, a plateman and wine waiter in Hall, who joined the staff in 1908. Hunt was extremely well thought of at the Inn and was groomed to replace the Butler to the Society on his retirement. He joined the reserves in October 1915 and was called up on 29 May 1916. He was killed by a stray sniper bullet on 4 September 1918. Initially, it was unclear what had happened to him and his wife wrote to the Inn to ask them for help in finding her husband. The Archive contains a file of all the associated correspondence and information relating to Hunt’s career in the Army, his death and the Inn’s later support for the education of Hunt’s two sons. 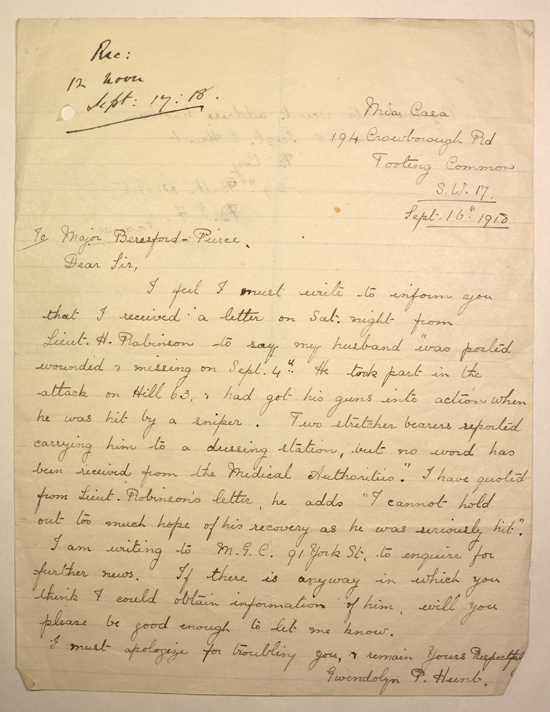 Letter from the wife of Charles Hunt, plateman and wine waiter, seeking assistance in finding information on the fate of her husband, 16 September 1918 (MT/8/SMP/193)

As the First World War has now faded from living memory, it can be hard to imagine what living through those years was like.  The sheer scale of the war and the number of casualties is hard to comprehend. The documents within the Middle Temple Archive, however, can help in revealing the stories of individual members of the Inn who fought in the Armed Forces or who contributed to the war effort in other ways. The echoes of the Great War live on through the records it left behind and, by preserving and making these records accessible, the Archive can help ensure that it is not forgotten.