This month, we take a closer look the history and stories which surround certain items of silver in the Inn's collections, focussing on the Temple Church silver. The silver collection of the Middle Temple consists of several hundred items of silver plate dating from the 16 th century to the present day. Until recently, the origins of a large proportion of the silver have been unknown. The Middle Temple Archive has been undertaking a great deal of research into the provenance of the Society’s silver collection, which has illuminated the history of many of these objects. 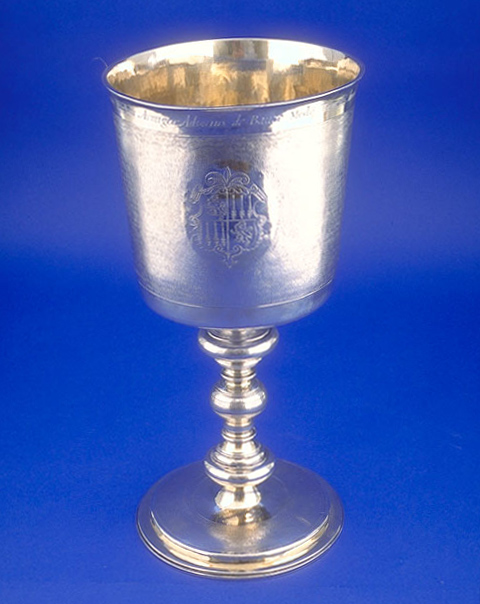 During the reign of Elizabeth I (1558-1603) and up until around 1730, an Associate Bencher, was expected to present silver plate to the value of £10 to the Middle Temple on their election. Additional items were also purchased by the Inn. The oldest silver in the collection is found among the pieces donated by Lord Rothermere in the 1930s, but the earliest that has a direct connection to the Inns of Court is the silver of Temple Church, half of which is kept by Middle Temple, the other half of which is in the collection of the Inner Temple. The collection consists of two communion cups (1609), four flagons (1637), and a pair of patens (1627). Tragically, no silver survives that was donated to or purchased for the Middle Temple prior to 1663. 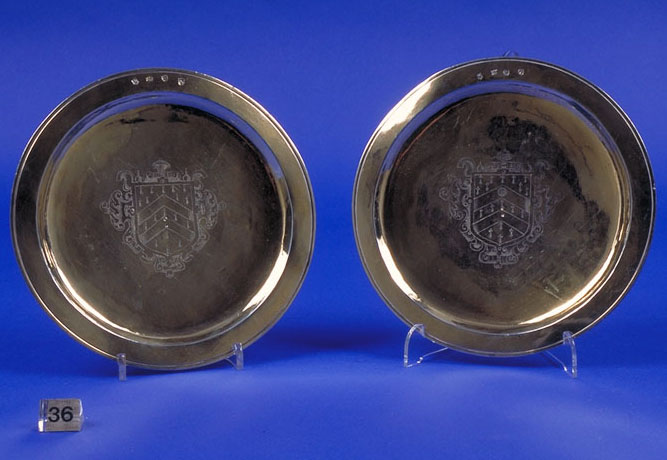 The failure of any of the Middle Temple’s early silver to survive is primarily due to the unfortunate circumstances of the English Civil War (1642-1651), which exacted a huge toll on the Inn and the country as a whole. One of the effects of the war was that the society's income was so disrupted that the Inn was kept afloat only by the Under Treasurer, John Bayliff, personally financing it. By November 1647 the Society was indebted to him to the sum of £1812. 13s. On 1 June 1649 it was decided by Parliament that “all the plate of the house, more than is for ordinarie use, be forthwith solde by the Treasurer and the monies thereof coming payed to the Under Treasurer: in part satisfaction of his debt due to him from the house”.

The Temple Church silver survives to this day because it came under the care of the Master of the Temple during the 17 th century, though even this did not survive the Civil War unscathed. An Inventory of the Church’s possessions compiled in 1639 on the death of Dr. Micklethwaite, Master of the Temple, shows donations of silver plate by members of the Temples. It provides information on two items that are no longer present in the collection. These are:

Inprimis one silver and guilt Bason given by S[ir] Edward Littleton kt his Ma[jes]ties Solicitor general and Treasurer of the Inner Temple [Appointed Solicitor General in 1634].

Item two silver and guilt candlesticks given by Robert Casar Esq Barrister at Law [Called to the Bar 03/11/1622] and one of the Societie of the Inner Temple. 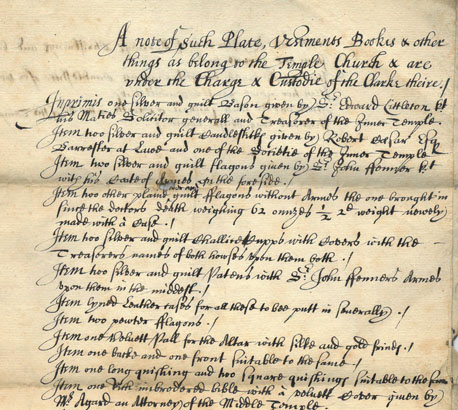 An inventory of Temple Church compiled on the death of Dr. Micklethwaite, Master of the Temple, 1639 (MT.15/TAM/80)

The archive retains an order issued by the House of Commons on 27 May 1643. This commanded that “the Treasurers of the Temples be desired to lend upon the publique faith the Basons and Candlesticks of late yeares made to be used upon the Altar”. It is highly likely that the items missing from the Temple Church silver collection were melted down, the proceeds of which disappearing into the coffers of the Parliamentarians. Another interesting aspect of the order is that it also commands that “the Rayles about the Table and the Crosses about the Church be pulled downe, and the Table removed from standing altarwise and the ground levelled”. The removal of the ostentatious silver ornamentation from the altar of Temple Church was simultaneous with the elimination of other elements of High Anglican worship. This incident illustrates well the fact that the Temple Church, as well as its silver, was involved in the religious conflict between Laudianism and Calvinism that was one of the central causes of the Civil War. 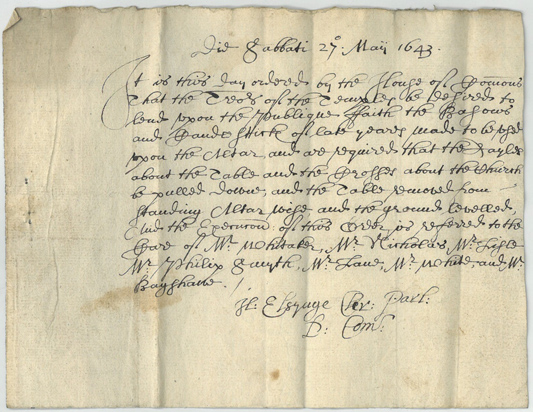 The emphasis placed on the religious role of the Temple Church silver by the authorities can be seen as a barometer of which side had the upper hand in the religious conflict during the early decades of the 17 th century. There is evidence for this in records from the 1630s, prior to the war. The Calendar of Inner Temple Records extensively quotes the State Papers, held in the National Archives, which provide detailed information regarding some of the Temple Church silver (p.lxxxvi). It states that, in May 1637, Dr. Micklethwaite, Master of the Temple, petitioned the King in regards to Temple Church and its silver.

“There is a legacy of £100 given by Sir John Fenner deceased some years since for plate and other ornaments of the communion table or altar in the Temple church (now to be disposed of) in which church the altar or holy table, pulpit and reading places are not placed so decently as in other churches”.

The result of this petition was that the King commanded that the communion table, pulpit and reading place be ordered and placed as decently as in “his own Royal Chapel, and that the Lord Keeper and Lord Treasurer shall take care as well for the employ of the £100 bequeathed for plate as for clearing the ancient chapel and restoring it to the uses of the church.” This command demonstrates the King’s imposition of his High Anglican preferences, with the assistance of the Master of the Temple, on the members of the Temples hom worshipped at Temple Church. This is re-iterated in a letter quoted in the Calendar of the Inner Temple Records (p.lxxxvii), from Mr W. Davy to his friend F. Gawdy dated 16 th November 1637, which provides evidence that Micklethwaite was diligent in carrying out the King’s command.

“The Temple Church is locked up, that none are suffered to walk there as they have used to do, and at divine service, morning and evening, wax candles burning upon the communion table and the pulpit removed to the side of the church.”

The King followed the tenets of Laudianism, which placed great importance on the altar as the centre of worship in the church. This, among other theological differences, placed it too close to Catholicism in many people’s minds and was antithetical to the Calvinistic approach, previously favoured in Temple Church, which placed a greater emphasis on the pulpit and sermons. It is fascinating to see one of the central conflicts that led to the Civil War playing out in the history of Temple Church.

There are other interesting details in the petition of Dr. Micklethwaite. He requests that a chapel annexed to the church, where the church’s records were kept, be turned into a vestry as “there is no vestry in the said church for want wherof the ornaments of the church have hitherto been stolen and embezzled”. This could explain why there is no silver originating from Temple Church that is older than 1609. Subsequently, as shown in the inventory, the silver was kept in lined leather cases and these were locked away in the vestry. This prevented the loss of the silver, with the exception of the items taken by the Parliamentarians. 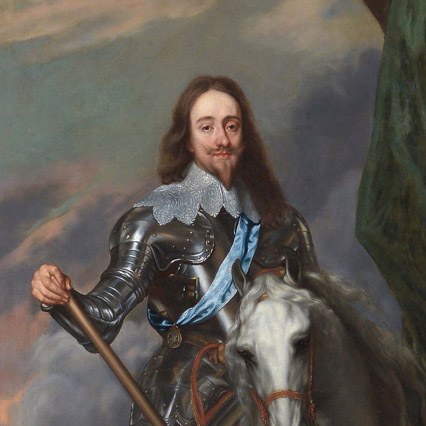 The mention of Sir John Fenner’s bequest of £100 for silver plate in Micklethwaite’s petition is of considerable importance. Until recently, the provenance of many of the Temple Church silver items remained a mystery. The discovery of the aforementioned Temple Church inventory of 1639 provided vital information about the origin of the silver with the mystery coats of arms. Two of the listings include:

Item two silver and guilt flagons given by Sir John Fenner kt with his Coate of Armes on the foreside.

Item two silver and guilt patens with Sir John Fenners Armes upon them in the middle.

With Sir John Fenner, an Inner Temple member, named in the inventory, it was possible to search through the archives and find an extract from his will that we are fortunate to possess. The will states that on his death in 1633 he bequeathed, among other things, “ two silver flaggons ” and other plate to be used in the celebration of Communion not exceeding the sum of £100. This directly linked the silver in the inventory to the bequest of Sir John Fenner and enabled its identification in the Calendar of Inner Temple Records , allowing us to place the date of the purchase of Sir John Fenner’s silver to between May 1637-1639. 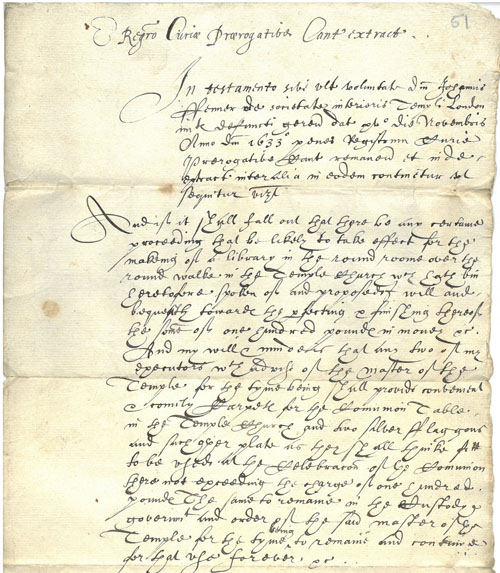 Temple Church burial registers record that Sir John Fenner was buried in Temple Church in November 1633, in the long walk on the Inner Temple side. Perusal of 18 th and 20 th century records of the inscriptions of the church do not reveal any dedicated to him. He left all of his property to a newly created charitable trust that survives to this day.

Just as silver continues to play a role in the life of the Inn, documents from the archive, alongside other historical sources, continue to yield fascinating information about the history of the Middle Temple and the objects in its possession. We look forward to sharing new discoveries with you in the future.