The Middle Temple has accumulated a large collection of silver over several centuries, consisting of hundreds of items. A major archive project has involved researching the origin of the items within the silver collection. This focus has revealed some of the interesting history behind these objects as well as the Inn's collecting in general.

It is likely that the Inn's tradition of collecting silver began early on in its history as part of its financial strategy and as a method of displaying its importance and wealth. Before the widespread use of banks, buying precious metals and items of plate was the primary method of storing financial surpluses. Silver plate functioned both as a lavish display of prosperity and prestige, and as an important monetary reserve that could be used during times of financial strife. 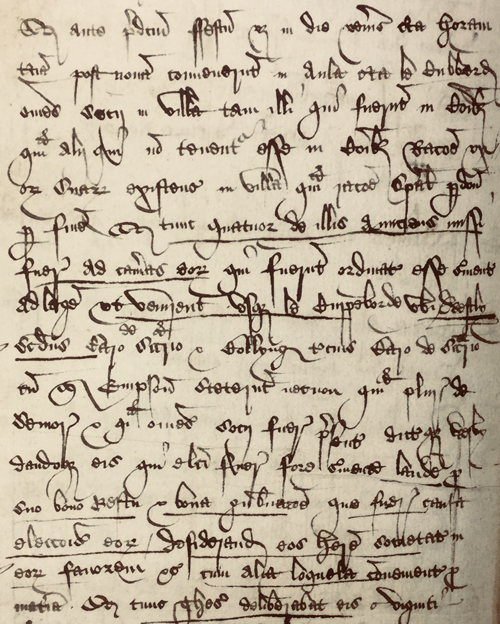 Part of account of a feast for the Serjeants-at-Law, mentioning a cupboard, Minutes of Parliament 9 November 1503 (MT.1/MPA/1)

The earliest evidence for the existence of the Inn's silver plate can be found in the Minutes of Parliament of 9 November 1503. These minutes provide an account of the occasion that a feast was held for the Serjeants-at-Law at Lambeth. Prior to the feast, all the members of the Inn in London at the time assembled in Hall around "le cubbord" and the Serjeants were brought up to "le Cuppeborde" for a ceremony, before proceeding to Lambeth. Although the silver is not mentioned outright, the reference to a 'cupboard' is key, as at this time a cupboard was used for displaying expensive plate during banquets and ceremonial occasions. Although the exact nature of the items on display is lost to time, there is here a clear implication that the Inn had accumulated a collection of plate by the early 16th century. 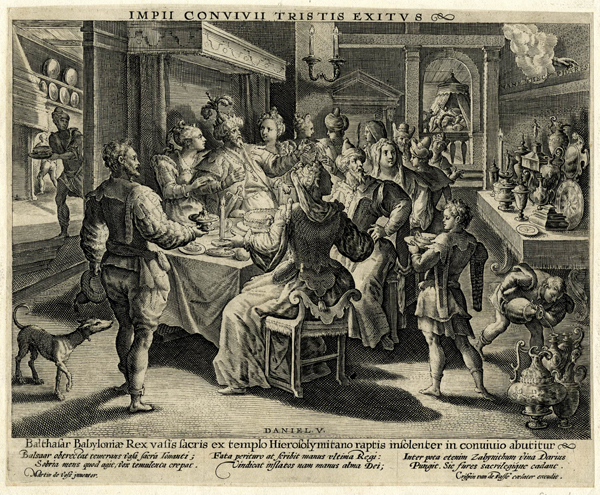 Print of Belshazzar's Feast, with a cupboard of gold and silver plate taken from the Temple of Jerusalem, 1590-1600 © The Trustees of the British Museum

From the late 16th century, much of the plate of the Society was acquired through the means of an Order of Parliament dated 12 May 1585. This stated that all members Called as Associate Benchers, who were Called to the Bench without having served as Reader, and had no voice in the governance of the Inn, had to give either £10, plate or some provision for the table - this was to provide some parity with the great expense incurred by Readers during the course of their duties. Elections of Associate Benchers were very rarely made, except during the Civil War (1642-1651), when there were no Readings given for a period of three years, and ceased altogether after 1730. Many donations of plate were made because of this order, including many items of 17th and early 18th century plate currently in the Middle Temple's collection. 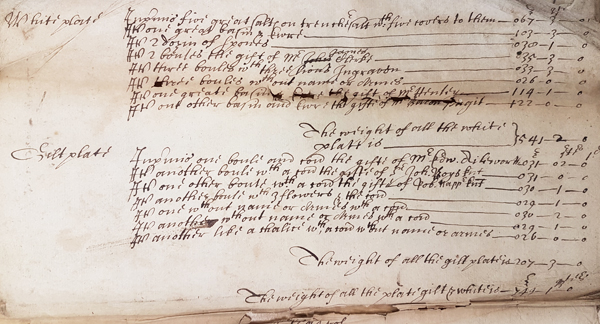 Despite the antiquity of the Middle Temple, the silver plate longest in the Inn's collection dates only to 1663 and was donated in 1664. The role of the Society's silver as a monetary reserve is the reason for the non-survival of its earlier plate. In 1637-1640 the Inn undertook a financially ruinous set of construction works, overseen by Under Treasurer John Bayliffe. The cost of the project overran substantially and Bayliffe was obliged to fund its completion out of his own pocket, pushing him towards financial ruin. The final sum owed to him by the Inn amounted to £1812 13s - to put this in perspective, the annual wages of a servant at the Inn around the time ranged from £2 to £11. In addition to this debt, the receipts of the Inn declined substantially during the Civil War. Unable to raise the money by other means, the Inn was forced to partially discharge its debt through liquidating its silver. An order of Parliament was passed on 1 July 1649 for the sale of the silver, stating "that all the Plate of the House more than is for ordinarie use be forthwith solde by Master Treasurer and the monies thereof coming payed to the Under Treasurer in parte of satisfaction of his debt due to him from the house". 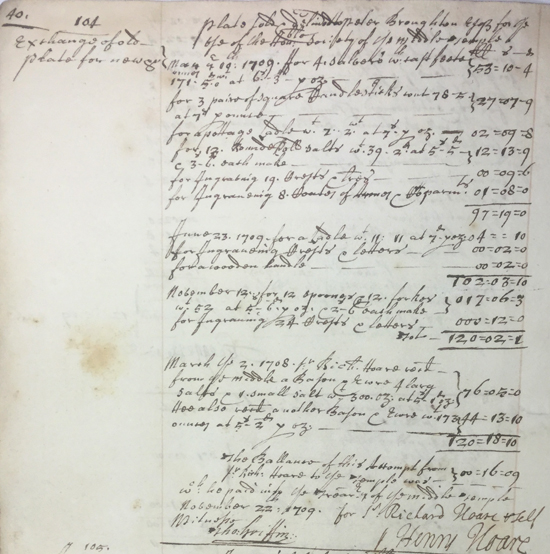 The 1649 sale of the Middle Temple's silver was the largest such occurrence over the centuries, but selling old articles of plate to fund the purchase of new, more fashionable items was commonplace and many examples of this can be found in the Treasurers' Receipt Books. One particularly notable example is the sale of silver donated by Sir Edmund Saunders, who gave the Inn 100 guineas for the purchase of plate in 1682/83. Articles, including four large table salts, a voiding basin and ewer and a large gilt bowl, were duly purchased at the time of the bequest, and the salts and ewer and basin were subsequently sold in 1709 to Sir Richard and Henry Hoare, founders of C. Hoare and Co., the oldest bank in the United Kingdom. In exchange for the old plate, four salvers were purchased and re-engraved with the name of Sir Edmund Saunders. The original 1682 gilt bowl is still in the Inn's collection. 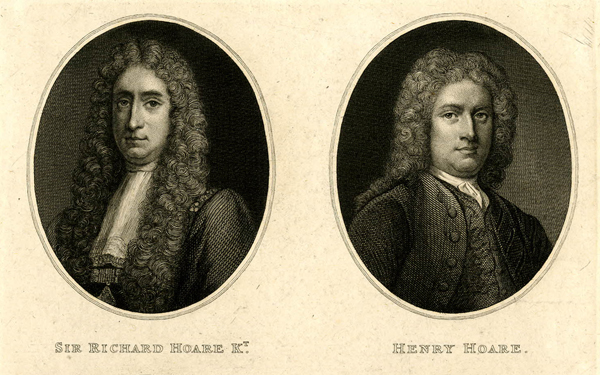 Print of Sir Richard and Henry Hoare, goldsmith-bankers patronised by Middle Temple, 1800-1810 © The Trustees of the British Museum

Much of the 17th and early 18th century plate present in the Middle Temple finds its origin in the aforementioned custom of the presentation of plate by Associate Benchers, usually the holders of lucrative legal or quasi-legal offices. Donations which fall into this category include the gilt cups of Sir Robert Henley and Master Richard Barker, the pottage dish of Sir James Astry and the candlesticks given by Master Matthew Johnson. During the 18th century, the Inn was fortunate to receive donations of plate from three Speakers of the House of Commons, all of whom had been Called to the Bar at the Middle Temple. This includes the silver tray given by Arthur Onslow (1728), and the soup tureens presented by Sir John Cust (1760) and Sir Fletcher Norton (1770). Sir John Cust's election to the Bench is of special interest as he had no desire to participate in the government of the Inn - he was made the first Honorary Bencher at his own request. 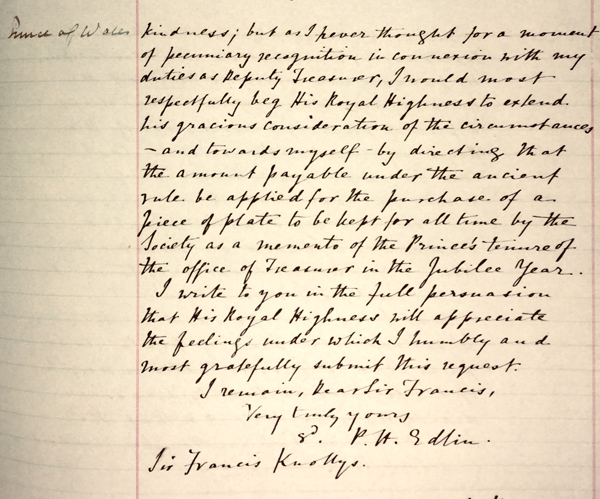 After the presentation of silver by Master John Hatsell in 1803, there was a long interval of more than eighty years during which no further gifts were received by the Inn. Although the number of gifts given to the Inn reduced, various purchases were made throughout the 19th century and large quantities of silver tableware was hired for events. The next gift of silver to the Inn was in 1888 from H.R.H. Albert Edward, Prince of Wales, later King Edward VII, after his year as Treasurer. On his election in 1887, many of the duties of the Treasurership were taken up by Sir Peter Henry Edlin, Deputy Treasurer for that year. The Inn paid the customary sum of £100 to the Prince of Wales, who gave it to Sir Peter in recognition of his service. Sir Peter declined the sum and suggested it be employed for a piece of plate for the Inn - this later became the Paul Storr Loving Cup that was used for Grand Days and Readers' Feasts up until the early 21st century. Edlin was later rewarded by the Inn with his own gift of plate. 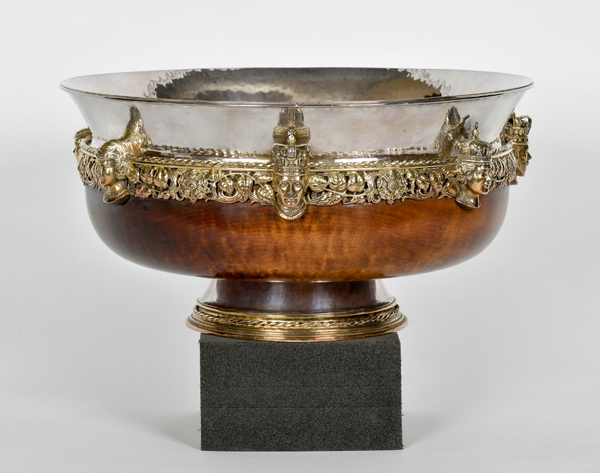 The example set by the Prince of Wales was followed by Lord Justice Coleridge in 1892 and subsequently many others, with a veritable wave of donations occurring during the 20th century. It was during this time that the Inn's earliest pieces of silver plate were acquired. The election of the newspaper proprietor Harold Sidney Harmsworth, 1st Viscount Rothermere (1868-1940) to the position of Honorary Bencher in 1928 proved to be extremely advantageous to the Society's silver collection. When he was elected an Honorary Bencher in 1928, he was already a knowledgeable collector of silver. Realising that the Inn had no silver made earlier than 1663 in its collection, he determined to remedy this. Between 1931 and 1940, he gave twenty-three pieces of silver made between 1557 and 1658 to the Society. It seems likely that two or three pieces came from his own collection, although the majority were bought by him, usually at Christie's. He, or his driver, would turn up at the Under Treasurer's office, unannounced, with the latest gift wrapped up in one of his own newspapers. One of his last gifts before his death in 1940 was the Three Kings Mazer Bowl, made by Omar Ramsden in 1937, which he had commissioned, or at any rate acquired, for his own collection. Almost all the pieces in the Rothermere collection are of outstanding, museum quality. 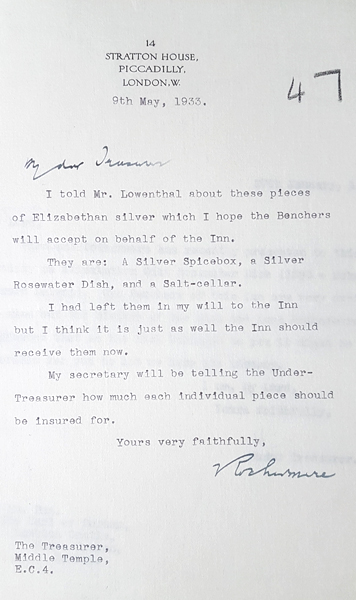 Letter from Lord Rothermere to the Treasurer regarding a donation of Elizabethan silver, 9 May 1933 (MT.11/DON/27)

Throughout the 20th century, in addition to antique pieces, the Inn acquired the work of contemporary artists through gift and purchase including a bowl by Gilbert Marks, bequeathed by Lord Diplock; a water jug by Leslie Durbin, given by Lord Salmon in 1972; a wine ewer by Stuart Devlin, given by Sir Patrick Graham in 1989; five ashtrays by Gerald Benney, donated by Peter Bevan in 1967; a double skinned fluted bowl by Alex Brogden commissioned for the Society in 1992-1993, water ewers and beakers by Keith Redfern, purchased by individual Benchers in 1997-2010; and a large number of candlesticks by Christopher Lawrence, purchased in 1998. 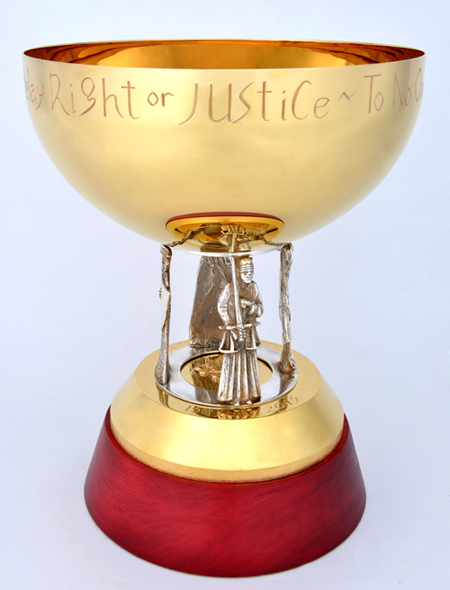 Silver gilt centrepiece commissioned by the Inn from John Doubleday to celebrate the octocentenary of Magna Carta, 2015

In the 21st century the Middle Temple is continuing to build a collection of contemporary silver. In 2015 the Inn commissioned the Magna Carta Cup from artist John Doubleday to commomerate the Octocentenary of the signing of Magna Carta. Doubleday is a popular artist with the Inn and has been commissioned to make beakers to add to the Inn's collection of Christopher Lawrence beakers. The long history of the Middle Temple Silver, then, continues - there are further plans for new acquisitions and new avenues by which members of the Inn can experience and enjoy the rich collection.