For centuries, animals - both real and imagined, physical and symbolic - have been present at the Middle Temple. This month we look into the archive to explore some of the stories surrounding animals at the Inn, and find them in some unexpected places.

One of the earliest references to animals in the archive appears in the Minutes of Parliament dated 18 November 1558, when the Benchers ordered 'none of the Fellowship to keep a Hawk within the Inn'. Hawking was a popular pastime amongst wealthy Elizabethans, one which the young gentlemen of the Inn no doubt enjoyed. The passing of this order suggests that specific incidents may have occurred as a consequence of resident hawks- sadly the records go no further on the subject.

Domesticated animals rather more familiar to the modern reader have long been commonplace at the Inn. Complaints abound throughout the records regarding the noise made by dogs being kept in chambers. One particular incident stands out. In February 1856, one Alfred Hawood wrote a lengthy letter to the Under Treasurer, Mr Dakyns, complaining of a dog kept by a Mr Ferguson at the top of his staircase in New Court. He branded it a 'serious annoyance', accusing it of 'snapping and snarling' at visitors to his chambers and also complained of the 'filth which he deposits on the stairs'. On the very morning Hawood penned the letter, a boy had been bitten on the leg while climbing the stairs. 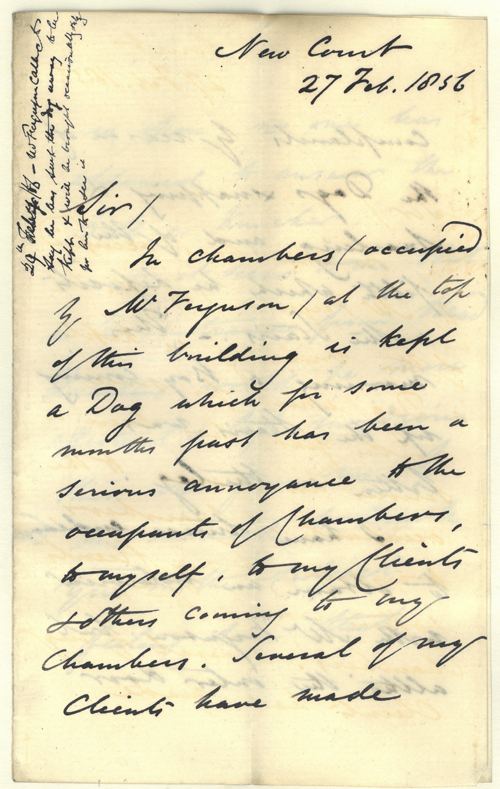 Having tried and failed to speak directly to Ferguson, Hawood appealed to Dakyns' authority, feeling that 'a remonstrance from Head Quarters would be more effectual and less invidious than one from me' in ridding him of the 'dangerous nuisance'. A marginal note by the Under Treasurer on the front of the letter relates the matter's somewhat poignant resolution: two days later, Ferguson called in to report that he had sent the dog away, but that - revealing his evident affection for the animal - it would be 'brought occasionally for him to see it'.

It was not only the barking of dogs causing Middle Temple residents consternation. One Samuel Phillips occupied chambers in the Hall staircase in the early 1800s, and kept a notebook containing his musings and jottings on a range of subjects. One which stands out is a remedy for 'the bite of a mad dog', credited to a Dr Turnbull. An 'electuary' was to be drunk, with ingredients including powdered bark, antimony, 'camphire' (camphor) and wormwood, then washed down with a cup of valerian tea. Following this Phillips recorded that a compound of opium, mercury, asafoetida and galbanum gum should be applied to the throat - which 'appeared to be the most effectual'. A reference to 'hydrophobia' suggests that this remedy was supposed to combat a rabies infection. 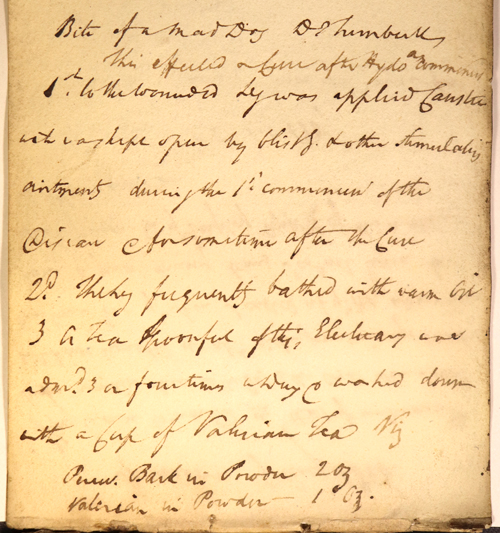 Detail from Dr Turnbull's remedy for the bite of a mad dog, notebook of Samuel Phillips, 1804 (GD.14)

As was typical anywhere in London, rats were a perennial nuisance at the Inn, and their presence became so problematic in 1829 that the Benchers let it be known that the services of a rat catcher were required. One William Busse wrote to the Inn offering his services as a 'Rat Destroyer', accompanied by two letters which bore glowing witness to his success in this area. One was countersigned by the House Steward of Arthur's Club, the other by no less than a representative of the Lord Chamberlain, testifying to his success while appointed to the Royal Household. 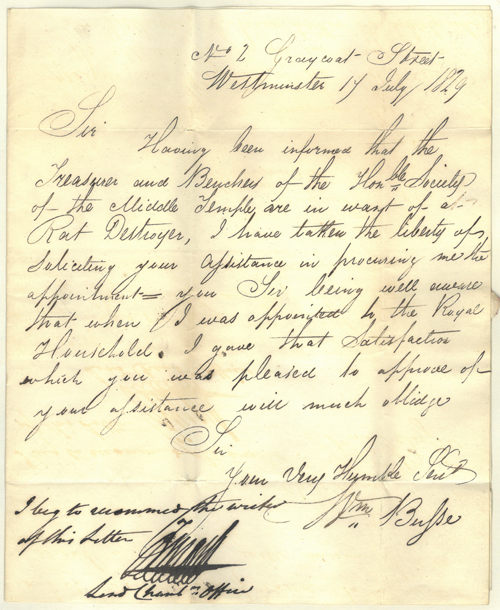 Letter from William Busse offering his services as a Rat Destroyer, counter-signed by a representative of the Lord Chamberlain, 17 July 1829 (MT.8/SMP/135)

Evidently such high praise was taken on board, as a letter survives reporting his agreement to clear the Inn of rats for five pounds and five shillings, and to be kept on at four pounds and four shillings a quarter. The letter mysteriously ends by noting that 'WB flatters himself his mode of distruction will give the greatest satisfaction'. The methods of Mr Busse remain unknown, but they were evidently effective as the Inn retained his services until at least July 1836, as entries in the Treasurers' Receipt Books for his quarterly payments indicate. 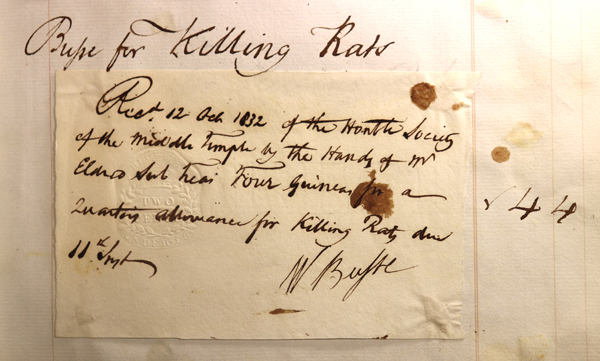 It was not only rats who might have found the Inn a dangerous place to visit. A letter survives from William Eldred, Under Treasurer, to Mr Burnell, the Inn's mason, written in 1798 and relating to a spot in Middle Temple Lane, 'much complained of on account of the number of horses which fall there almost every day'. Eldred was particularly vexed because, having raised this issue, the 'temporary prevention' put in place by Burnell was found in 'every part of the Lane but where it was wanted'. 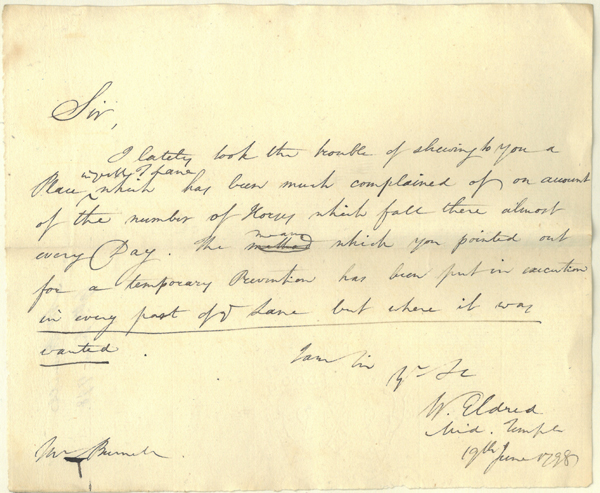 Letter from the Under Treasurer to Mr Burnell concerning horses falling in the Lane, 19 June 1798 (MT.20/XXXIII/I/35)

Presumably Burnell eventually got it right and the Inn was rendered a little more horse-friendly, for in 1837 the Lord Mayor, Aldermen and other important figures in the City of London stationed their horses at the Middle Temple on the occasion of the visit of Queen Victoria, only recently on the throne, to the City. A letter survives in the archive from Henry Woodthorpe, Town Clerk of London, thanking the Inn for this accommodation. 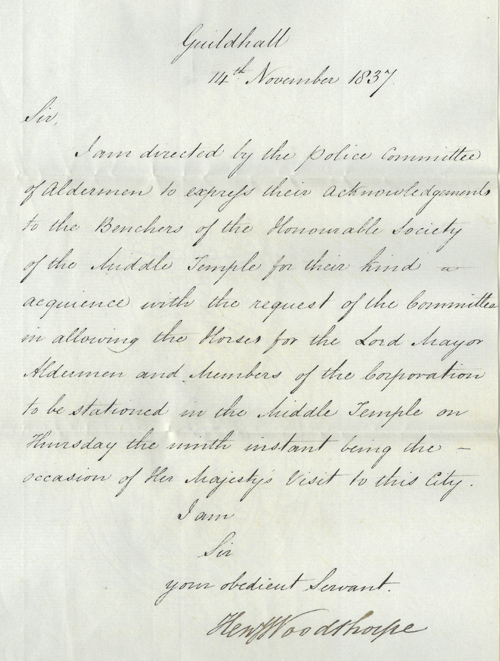 Letter from Henry Woodthorpe, Town Clerk, to the Under Treasurer, thanking the Inn for the accommodation of City of London horses, 14 November 1837 (MT.20/III/VIII/1800/1)

It is clear, then, that animals have been at the centre of much activity, disruption and controversy over the years. However, many far better-behaved creatures can be spotted around the Inn, in art, statuary, heraldry and symbolism. If one looks carefully at the effigies in Temple Church, for example, one will spot the stony remains of a dog reclining loyally at the armoured feet of its master, William Marshal, 1st Earl of Pembroke. The back half of the unfortunate animal was a victim of the Blitz - a photograph taken before the war shows it in happier times. 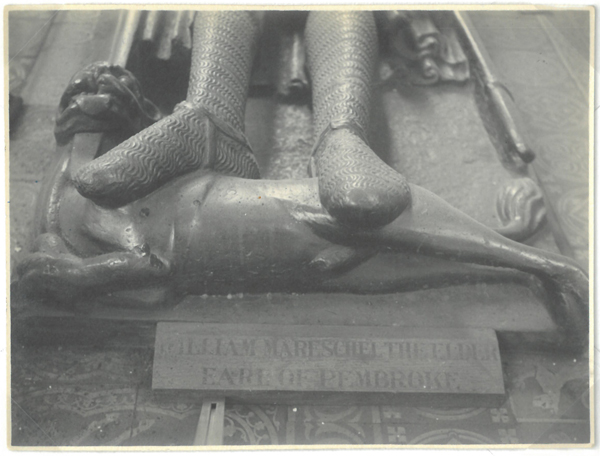 The most common animal in the Middle Temple is probably the Paschal Lamb, adorning as it does so many stone arches, doorways, signs and publications. The Lamb & Flag was an emblem of the Knights Templar, and was adopted by the Inn as its badge at some point in the early years of the Society's existence, though was not officially registered on the Inn's Coat of Arms until 1949. The lamb is, properly, the 'Lamb of God', a representation of the sacrificed Christ, and bears a flag displaying the St George's Cross. The lamb appears in a perhaps slightly less lofty context in the 1919 children's book, 'Within the Magic Gateways', in which it leads a child, brimming with wonderment, on a tour around the Temple; a trip on which she meets such anthropomorphised characters as the Pump Court Gentleman and the spirit of the Temple Fountain. 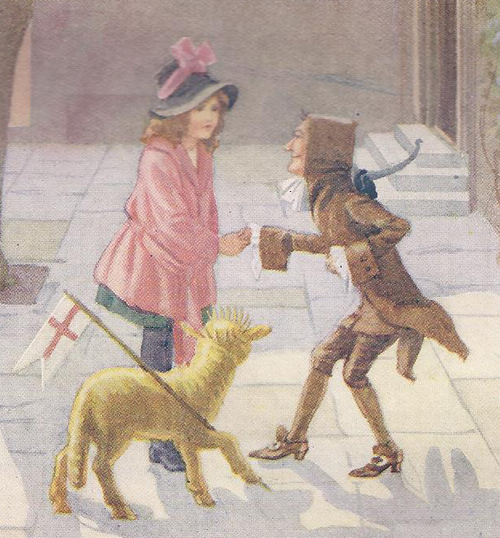 Scene from 'Within the Magic Gateways', 1919 (Courtesy of the Inner Temple Archive)

The Lamb & Flag is not, of course, the only heraldic beast to be spotted about the Inn - they feature on many coats of arms on the Readers' panels in Hall and the Bench Apartments. These include the traditional lions rampant, et cetera, but also many which appear as part of 'canting' arms - those which present a visual pun on the bearer's name. Examples of these include the arms of James Whalley (three whales), George Beare (three bears) and Thomas Field-Fisher (a kingfisher). The red squirrels on the panel of Ralph Littler and the three geese on Roger Gillingham’s coat of arms are, while not ostensibly wordplay, also worthy of note. 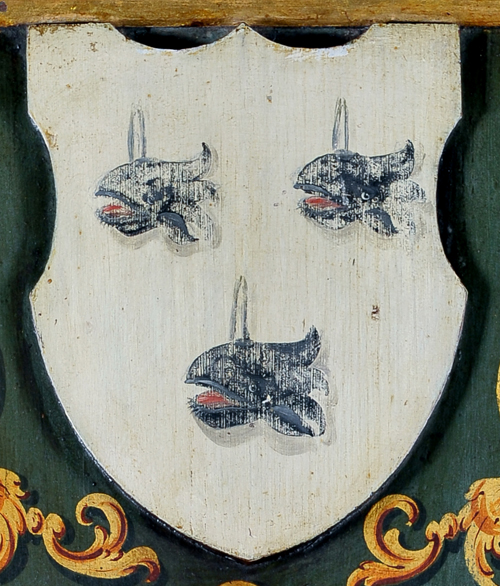 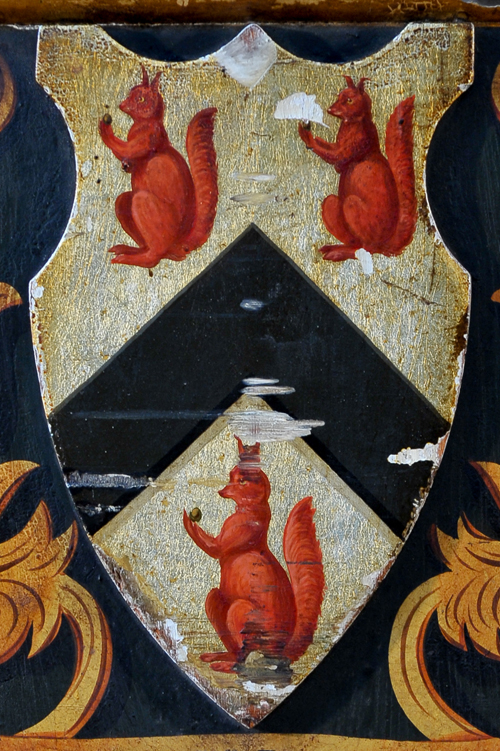 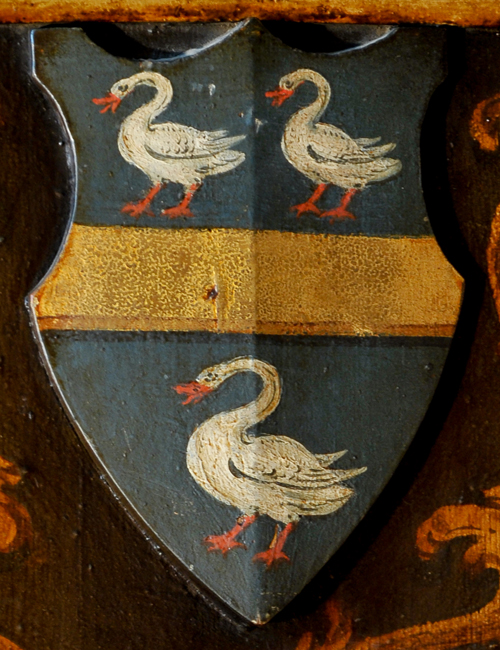 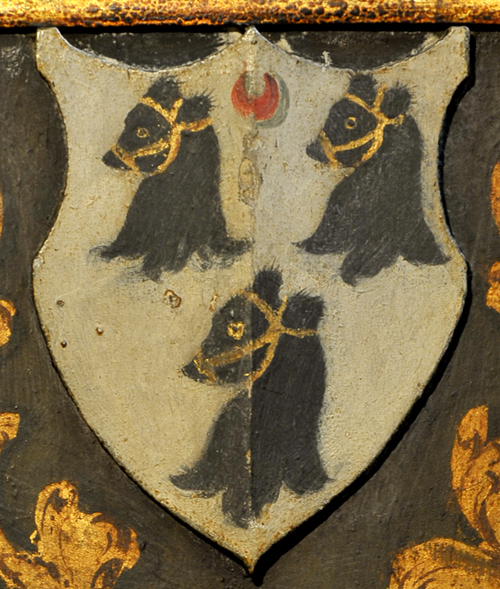 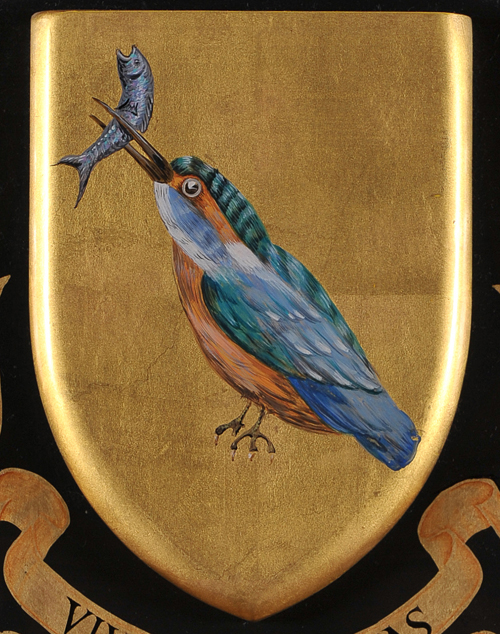 Today, of course, animals are far from unheard of at the Middle Temple. In recent decades, a family of mallards nested in the Inn, and surviving photographs show a bridge built for the ducklings to and from the fountain's basin. Dogs, too, remain a familiar sight, being walked in the garden and occasionally still resident in chambers (though there have been no recorded bitings in the present century). A group photograph of Middle Temple staff from 2001 shows three staff dogs - those of the Under Treasurer, Head of Catering and Head Porter. 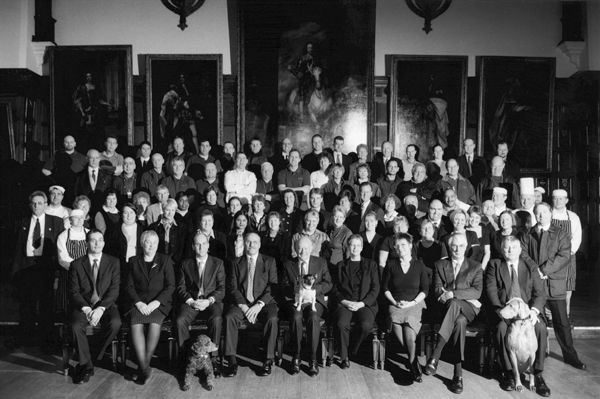 Since 2010, bees have been a part of the Middle Temple menagerie, as part of a City-wide initiative, with which St Paul's Cathedral has also been involved. The Head Gardener has also been working to improve wildlife diversity around the Inn, particularly insects and birds: there are now established populations of wrens, blackbirds, robins and blue tits. In a development which might have perturbed Parliament back in the 1550s, we are also occasionally visited by local peregrine falcons, and in the summer of 2018 a kestrel spent the afternoon hunting from various vantage points around Fountain Court. The animal population of the Middle Temple, then, seems set to continue to flourish in the years to come.