By the 1640s, the Middle Temple had accumulated an impressive collection of silver, many pieces of which were donated by Masters of the Bench. Conventional historical wisdom regarding the loss of the silver has theorised that it was sold in 1649 to settle the debts of the Middle Temple that were accrued during the years of the English Civil War (1642-1651) and caused by the loss in income to the Inn at this time. For many years it had been assumed that no record survived of the sold silver. However, archival research can sometimes lead to the discovery of interesting and significant documents in the most unexpected places, and in this case has yielded the elusive list of the Middle Temple's original silver plate. In addition to this discovery, analysis of the accompanying documentation has changed the narrative surrounding the necessity of the sale and provided insight into the perilous state of the Society's finances at the time. 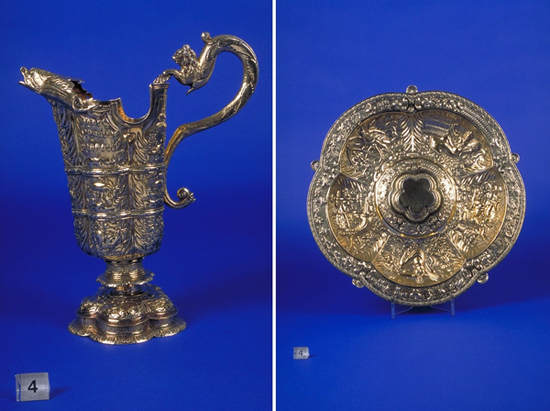 The newly discovered list of silver plate was found at the back of the summary of the Treasurer's annual accounts from 1637 - 1638. It names items held by the Society before the 1649 sale, and includes items such as spoons, ewers and basins, bowls with and without covers, salts and a trencher salt. It also records the donors of some of the items. There are subsequent lists of silver plate in the accounts of the years immediately following, but these are less comprehensive in detail. They do, however, record a few alterations to the original list that are worthy of note; in 1640-1641 the total number of gilt bowls increased from seven to eight, implying a donation or purchase at this time. A modern source names Sir Lawrence Hyde as the donor of a gilt bowl and cover in 1639, although this has not, at the time of writing, been verified against original sources. In addition to this acquisition, in 1641-1642 one of the great salts and the trencher salt were pawned. The pawning of some of the silver during this time suggests that there were financial problems at the Inn by 1642.

The known details regarding the sale of the silver plate were as follows - by November 1647 the Inn had accrued a large debt of £1812 13s to John Bayliffe, Under Treasurer from 1619 to 1653/4, and that, by order of Parliament on 1 June 1649, the silver plate of the house, more than for ordinary use, was to be sold to pay part of the debt. Due to the timing of the order, in the later years of the Civil War, it is easy to make the assumption that the debt was accrued due to the interruption of the Inn's income that occurred during this period. However, analysis of the summaries of the Treasurer's annual accounts demonstrate that the majority of the debt was incurred between 1638-1640, prior to the commencement of the Civil War, and that, although additional debt accrued between 1641-1646, this sum paled in comparison to the total debt that the Society had already accumulated.

The accounts show that by 1640 the Society had accumulated a debt of over £1,889 to their 'accountant', John Bayliffe. This sum was reduced through the use of the £300 legacy left by Robert Ashley, which had been intended for the employment of a librarian. Further debt accumulated from 1641-1646 due to a deficit in the Inn's finances. By Michaelmas 1647, interest owed to Bayliffe had started to accumulate on the debt, which increased the total to £1812 13s. 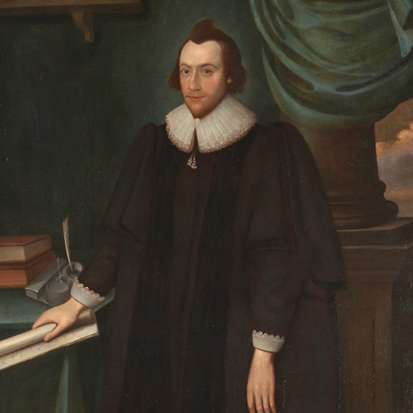 Looking further into the accounts, the reason for the high level of expenditure becomes obvious. At the time, the Society was spending large sums of money on building materials and building work. The minutes of Parliament from 27 October 1637 provide a reason for all of this work:

"Mr Treasurer, Messrs. Tanfeild, Thorpe, Francklyn, Whitaker, Conyers, Townesend, and Latham, or any three of them, are appointed committees to consider of the old buildings and the ruins and danger thereof, between Pumpe Court, Elme Court, Vine Court, and Middle Temple Lane, and of rebuilding them; also to treat with the gentlemen chambered therein for moving their things and bringing in money for the work, and to determine the sums to be paid."

The reason that the Inn accrued such a large debt was a large project to rebuild its old and ruinous buildings, the costs of which vastly overran. The minutes of Parliament from 16 October 1640 describe the location of the new buildings, which were situated "between Vine Court on the east, Little Court on the west and Figtree Court on the south". The completion of the building project, despite the expense incurred, fixed only a proportion of the Inn that had been considered for rebuilding by the committee and many more structures were left to continue their descent into ruin. This is demonstrated in minutes of Parliament dated 30 October 1646, where it is noted that "the ruinous chambers in this Temple Lane, part of which are fallen down, shall be viewed by the workmen of the House and the manner and cost of repairing them considered". In addition to this great expense, there were works being completed on Temple Bridge, but the burden of these works were shared with the Inner Temple. 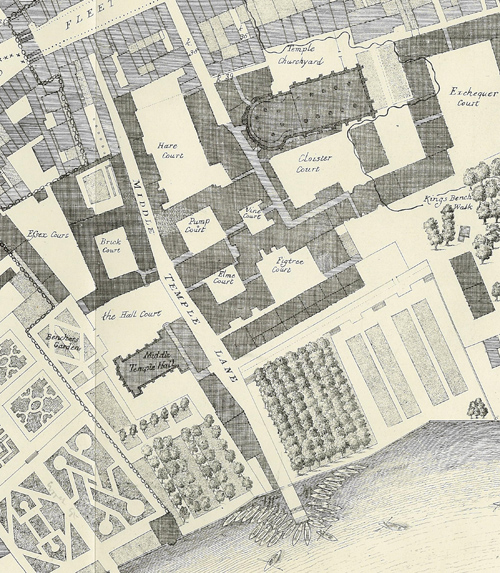 Detail, showing the Middle Temple, of a copy of the Map of London, 1677, by John Ogilby. Copied by John Locke, Treasurer, 1871

Details relating to the accumulation of the debt are recorded in the Treasurer's accounts. In Bayliffe's answers to exceptions that the auditor, Master Henley, took to his accounts (also in the summary of the Treasurer's accounts, 1641-1646), he states that at the beginning of the project he found that the cost of the building work would be far greater than expected, and that it would exceed the amount that the Society or that he had in reserve or could easily obtain. Bayliffe endeavoured to sell a farm that he owned to the Lord Marquess of Hertford for a sum of £2600, so that he could provide an interest free loan to the Inn. The 'Scotts War', probably what is now known as the First Bishops' War (1639-1640), intervened, and the sale fell through.

In order to ensure the continuance of the building work, Bayliffe took out a loan of £2000, borrowed on security, which accumulated interest. This interest contributed to the ruination of his finances and it is for this reason that he charged interest on the Inn's debt, increasing the sum from £1615 8s 6d to £1812 13s. Bayliffe attempted to dig himself out of the financial hole in which he had found himself. He requested that the Inn no longer burden his estate with further engagements, which should help to satisfy his creditors and set down conditions of repayment, as well as interest charges.

Bayliffe's account of his role as the Inn's creditor. In the summary of the Treasurer's annual accounts (MT.2/TAS/5)

The Benchers of the Inn took exception to John Bayliffe's accounting and to his management of the building work. Extensive documentation relating to this case is attached to the summary of the Treasurer's annual accounts, 1641-1646. Throughout Bayliffe's answers to exceptions to his accounts, it is obvious that he took umbrage at the auditor Master Henley, which he communicated through the use of rhetorical flourishes, such as that he "confess his auditor hath served himself to have more cunning in Sophistry to frame a charge against him in these terms than he professeth to have skill in the artificial solution thereof". In a separate document to Bayliffe's answers relating to accusations of financial mismanagement, he had further accusations levelled against him, including charges of incompetence, insubordination and of involving himself in fraudulent activities. A detailed list of these charges include:

Bayliffe wrote a lengthy and spirited defence of himself. In part of his statement, he wrote:

"...[the Masters of the Bench] will safely find other readable means enough to satisfy themselves concerning the greatness of the charge; rather than to seek a quarrel against him that hath done it and gone through with it upon his own strength even to the hazard of himself and his whole estate, you and with so much zeal and assertion underwent it; that he was resolved (by God's help) to bring it to effort though so doing he hath brought himself to a morsel of bread." 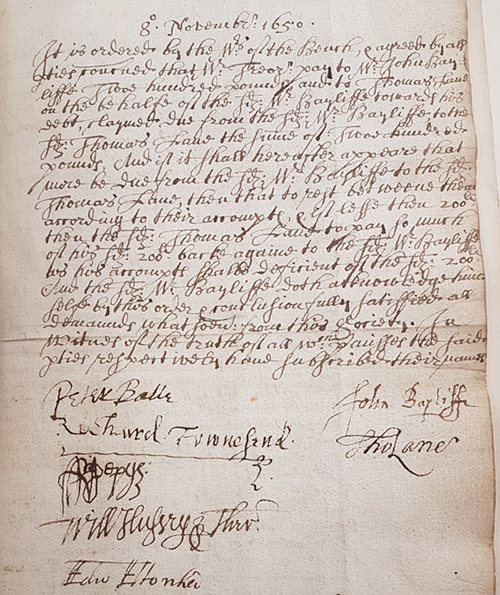 Although the outcome of the case against John Bayliffe was not recorded, it is very likely that he was exonerated. He remained Under Treasurer until 10 February 1653/4, and the Inn paid off its debt to him, discharging it fully on 8 November 1650 and disposing of items of great worth and prestige in the process. Although an unfortunate sacrifice, the sale contributed to the Benchers clearing the entirety of Inn's debt by the Parliament of 11 February 1652/3, getting the Society onto firmer financial footing and saving it from ruin.