February 2018: The Middle Temple and the Thames

Situated throughout its existence beside the Thames, the Middle Temple's history has long been bound closely together with that of London's great river, for better or worse. This month we explore the highs and lows of this relationship in detail, from the early days of the Knights Templar to tours of the Docklands in the nineteen-sixties.

The physical nature of the Thames has changed over the centuries, and inevitably these changes have affected the landscape and fabric of the Inn, while bringing disruptions and opportunities for its members. No records of the embankment of the river during the reign of Henry VIII survive in the Inn's Archive, though certain reported incidents indicate quite how much closer the river was to Hall in those days. In 1597/8, the barrister John Davies assaulted his fellow Middle Templar Richard Martin (the 'Prince of Love' discussed in December's edition ), with a stick until it broke, ran to the end of Hall shaking his sword above his head, and then hurried down to the river, to carry himself off to Oxford in a boat. He was expelled from the Inn, 'never to return' - though he later found success as a poet and politician and was in fact readmitted in 1601, having become a favourite of Queen Elizabeth I. 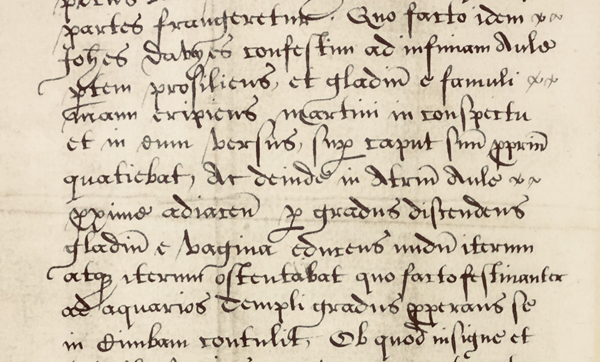 Until the Victoria Embankment was built, the Inn was directly accessible from the river, via what were known as the Temple Stairs. These were a landing point at the bottom of Middle Temple Lane, which, though small in size, loom large in the history of the Inn, and are shown in many plans and illustrations. It has been said that the Knights Templar erected the first incarnation of this landing place, known then as 'New Temple Bridge'. 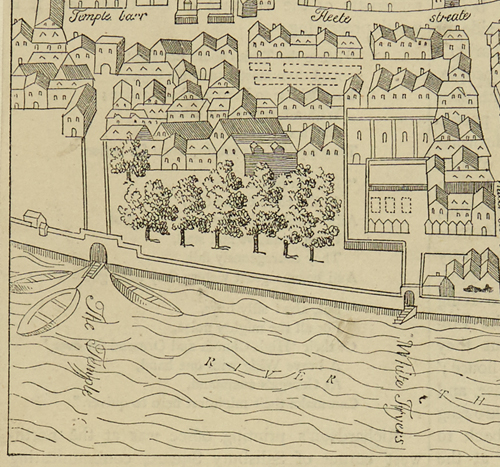 Detail showing the Temple Stairs, Middle Temple and Fleet Street from a reproduction of a plan published by Ralph Aggas, 1563 (MT.19/ILL/D8/01)

The Temple Stairs became a popular point of embarkation for anyone travelling from the City of London to Westminster, and when the lawyers arrived in later centuries, this no doubt proved a useful means of getting upriver to the Courts - certainly a superior route to the poorly-maintained, pot-holed Strand. Queen Elizabeth I, having spent a great deal on rebuilding the 'Bridge and Stayers' here, decreed in 1584 that henceforth the expense of maintenance should fall to the two Temple Inns. They also feature in Dickens' Great Expectations - Pip keeps his boat at at the Temple Stairs, and it is from here that he launches his attempt to smuggle Magwitch out of the country. 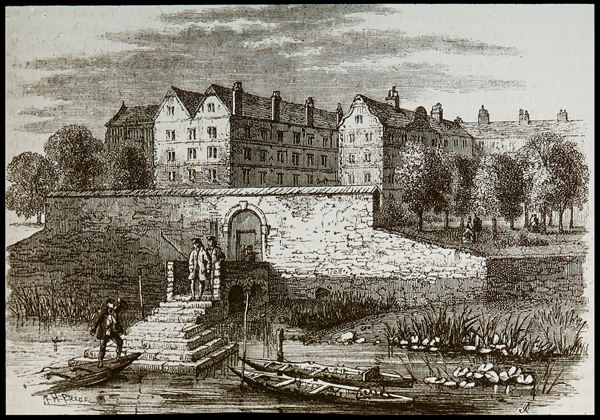 The relationship between the Inn and those responsible for boats on the Thames was for many years one fraught with conflict. The Minutes of Parliament for 12 June 1719 refer to the case of a certain Mr Henley, who had been keeping barges and 'lighters' (flat-bottomed craft used for 'lightening' or unloading ships) anchored by the Inn, and who was ordered to remove these and 'suffer none of them for the time to come to lye near the Garden wall', due to the damage they were causing. The problems evidently persisted, for in 1779 decisive action was taken, and a notice was published, declaring that unless the lighters, barges and other small craft were removed they would be 'cut away by a Person duly authorised for that Purpose', namely one Edmund Watford, Beadle of the Watermen's Company. 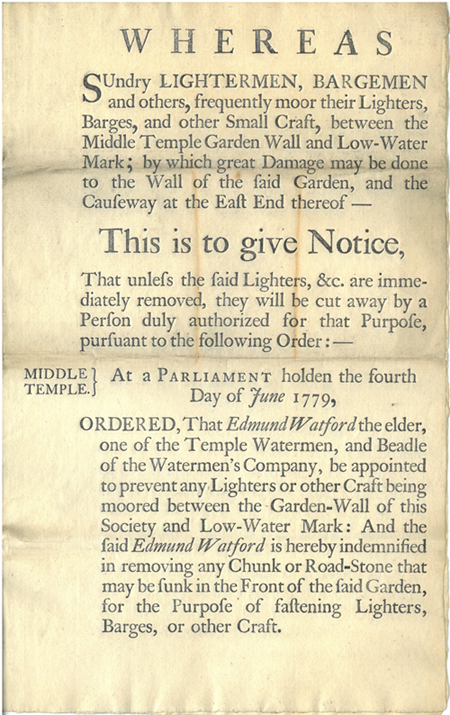 Printed notice as to the cutting away of certain moored craft, 1779 (MT.5/TSE/6)

One of the best-loved traditions in the history of the Thames is that of the 'Frost Fairs' - temporary fairs and markets set up whenever the river froze over - a common occurrence during the 'Little Ice Age' between the sixteenth and nineteenth centuries. The stretch of river outside the Temple was a popular site for these early 'pop-up' affairs, as the notable Middle Templar John Evelyn related in his diary - 'a bacchanalian triumph, or carnival on the water'. An engraving held in the archive illustrates the fair of 1683/4, in the background of which can be seen Middle Temple Hall, the gardens and Temple Stairs. 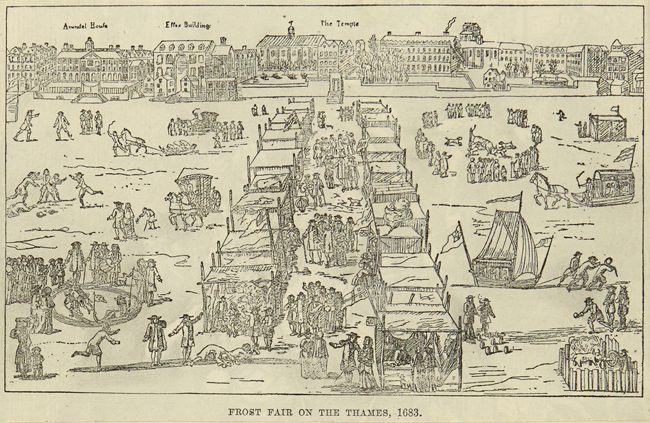 The 1760s saw another effort to embank the river at the Temple. The City of London proposed the idea in March 1767 and it was agreed to in May of that year, the Inn having secured certain concessions. Some elements of the work led to disagreements with the City over responsibility for payment, and many accounts of expenses survive in the Archive, including this one detailing masonry work on the new embanking wall, including £3.1.16 for 'Plugg-holes cut in & run with lead'. 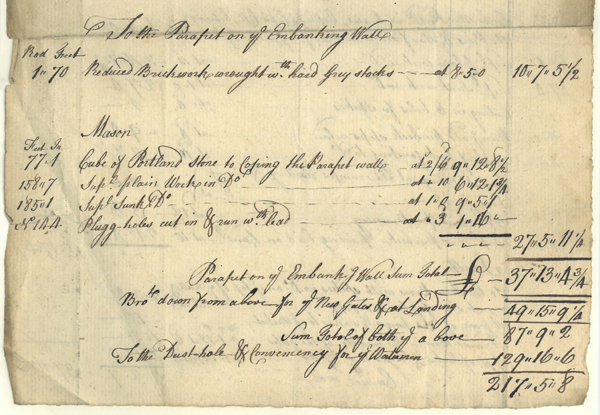 Record of expenses for work on the parapet on the embanking wall (MT.5/TSE/5)

The attempts to embank and develop the Thames further during the reign of Queen Victoria leave a long trail in the Archive, as both Temple Inns variously resisted, wrangled with and accepted the proposed changes. In 1844, one scheme to embank the Thames, which eventually collapsed for political reasons, was fiercely opposed by the Inns, the Treasurer of the day declaring the idea 'objectionable on many accounts', and the Inner Temple Bench described it to be 'injurious to the Gardens and the property, health and comfort of the inhabitants of the Temple'.

Eight years later, another Bill appeared in Parliament, this time proposing a railway viaduct along the length of the river. This was energetically opposed by the Inn in Parliament (the Treasurer and several other Benchers were MPs), as well as by numerous Wharfingers (keepers of wharves on the Thames) in a petition. In this they laid out a number of financial and practical 'Reasons against the Bill', and concluded by stating that opposition would have come from many more interested parties 'if the scheme had not seemed too absurd to be entertained by them for an instant'. After several postponements this Bill too disappeared. 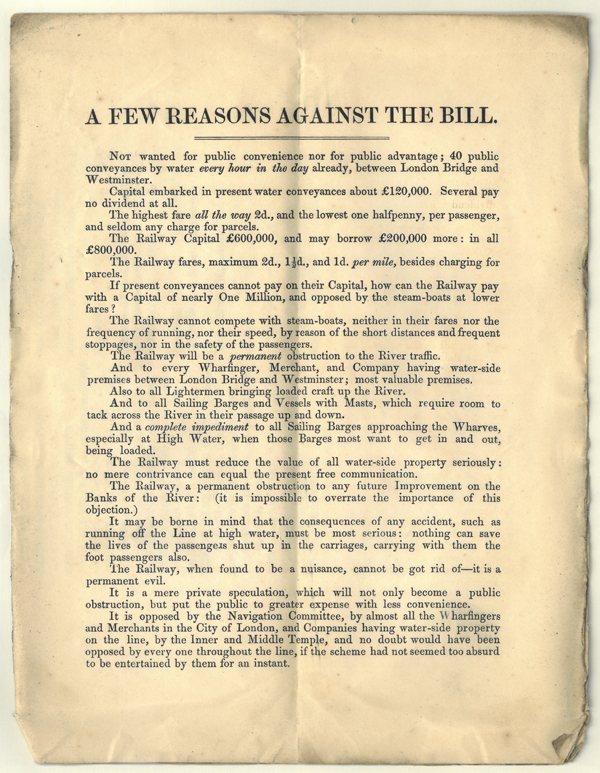 'A Few Reasons Against the Bill', from the petition of Wharfingers and other interested persons against the London and Westminster Thames Railway Bill, 1853 (MT.1/PPA)

The summer of 1858, however, saw an event which brought matters to a head. London's sewers having been unequal to the city's needs for many years, in June of that year the particularly high temperatures combined with a drop in the level of the Thames to leave copious raw sewage on the banks of the river, leading to what was popularly known as 'The Great Stink'. The workings of Parliament were disrupted down at Westminster, and the Temple did not escape its noisome reach. On 25 June, a memorandum was sent to the Under-Treasurer reporting that the Librarian was, 'in common with the gentlemen frequenting the Library, greatly annoyed by the offensive state of the Thames water', and requesting that chloride of lime be placed in the Library to ameliorate the situation. 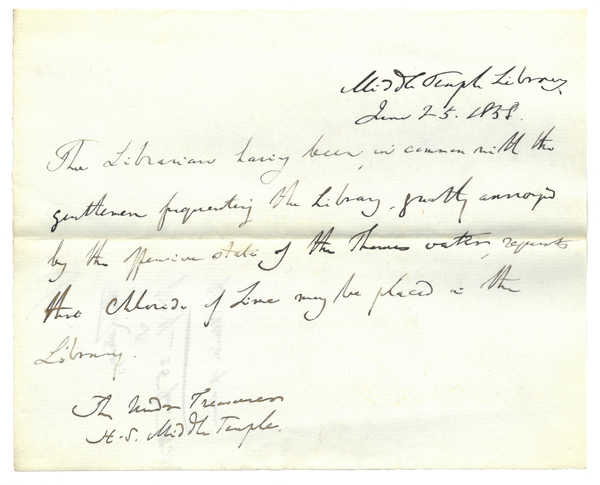 Memorandum to the Under-Treasurer requesting chloride of lime for the Library during the Great Stink, 25 June 1858 (MT.2/TUT/123)

This finally forced the government to accept the need for improved sewerage, and the great engineer Joseph Bazalgette drew up plans, encompassing a network of new sewers, a new underground railway, and a new embankment to cover them. Seeing the rights and property of the Inn threatened once again, the Bench dug in its heels, forwarding a dissent on 22 December of that year to the agents for the Thames Embankment and Railway Bill. This time, however, the Inn had not the good fortune of political intrigues dissolving their problems for them: the Bill passed and work began in 1864, though not before the Inn had won a range of concessions. The Victoria Embankment was completed in 1870 and opened by the Prince of Wales - a Royal Bencher of the Inn. 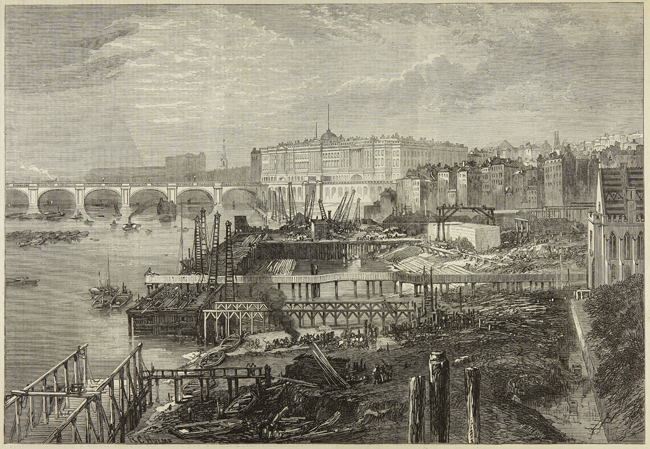 The Victoria Embankment finally saw the end of the Temple Stairs, after at least five centuries' service. Initially, the new land created was to be used for a line of new docks, but through the Inns' strenuous opposition this plan was abandoned and the land was added to those of the Inns' gardens. A new pier was constructed, bearing the arms of the Middle and Inner Temples, reserved for the use of members of the two Inns - rights enshrined in the Thames Embankment Act of 1862. 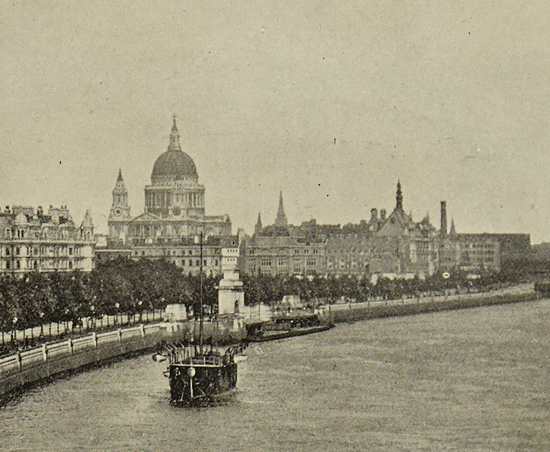 Temple Pier had fallen into disuse by 1934, and that year (inspired by an item in 'Punch' magazine), members of the Middle Temple and their guests took a boat trip to re-assert their rights over it. Setting out from the pier, they toured the King George V, Royal Albert and Royal Victoria Docks, and enjoyed a substantial tea (which included lobster sandwiches and Russian Gateaux), before returning to disembark at the pier once again. It would seem that not everyone present had the sea legs that might have been expected, and this was remarked upon in a witty poem penned to mark the occasion:

When dealing (on paper) with naval affairs
The Admiralty Bar is grand,
But when we embarked at the Temple Pier,
They decided to remain on land. 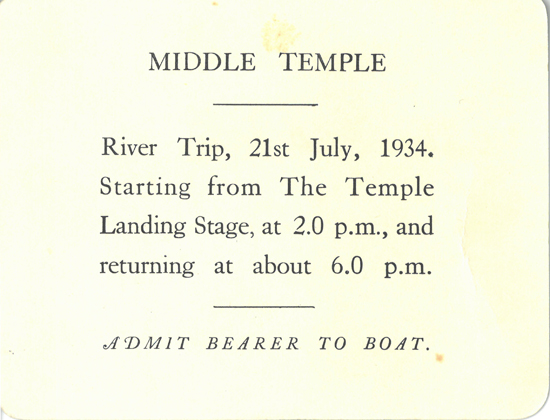 The sixteen verse poem concluded with the expression of hope that this would not be the last such trip:

So here's to the Act of '62,
And the rights that we've used today.
With the pious hope that we'll go again,
I propose to end this lay. 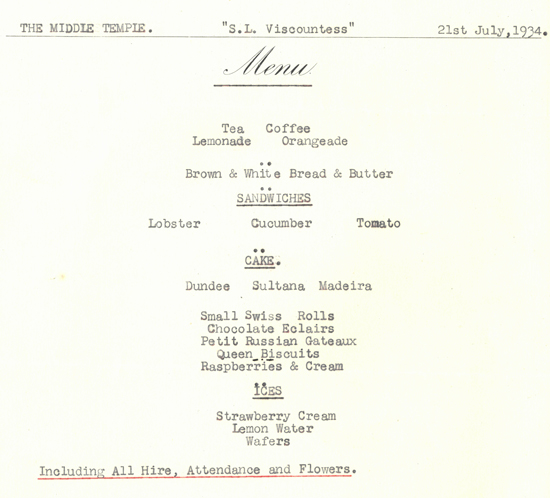 There was indeed at least one further such trip, in 1961. The Masters of the Bench hired the steamer 'Zodiac' for the 15th July that year, to proceed through the Pool of London and tour the docks. Three teas were given throughout the course of the journey, and limited places for barristers were made available. 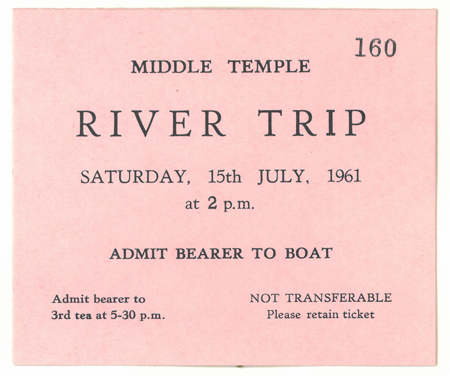 Though separated nowadays by the Embankment roadway, the Thames is still very much a part of the Inn's environment. The archway and doors leading from the Bench Apartments to the Hall are known as the 'Water Gate'. While a number of speculative explanations for this name have been suggested, perhaps the most popular is that the doors originally controlled access to the Temple Stairs before being moved to Hall. While this is debatable, given the doors' present good condition, they are just one of many reminders of the river's continued presence in the life of the Inn.