For many, Christmas just isn't Christmas without a dose of Dickens, so this month we look at the man himself, arguably Middle Temple's most prominent literary member, and his relationship with the Inn and its members. 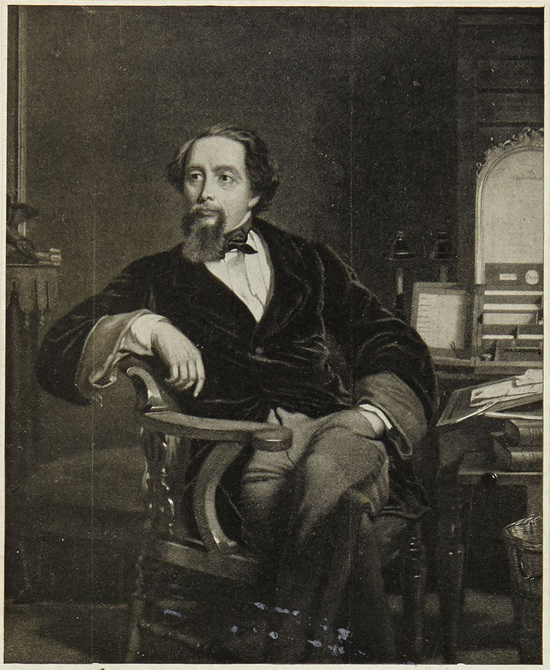 Charles Dickens was born in 1812, and had a complex and somewhat haphazard childhood, including a spell in a shoe-blacking factory following his father's incarceration in the Marshalsea debtor's prison. He worked as a political journalist from the early 1830s, and during this period occupied chambers in Furnival's Inn, one of the old Inns of Chancery, in Holborn (on the site of the present-day Holborn Bars building). The Inns of Chancery were small institutions, which had traditionally served as preparatory schools for the Inns of Court, although Furnival's Inn had, by this point, been disbanded as an institution and survived only as a group of chambers buildings. A lantern slide in the archive illustrates Dickens's building (since destroyed), and the Inn is described in Martin Chuzzlewit as 'a shady, quiet place... rather monotonous and gloomy on summer evenings'. 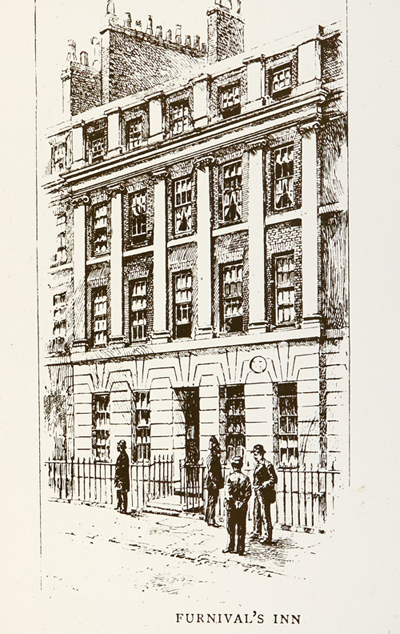 By the time Dickens was joined the Inn, he had already achieved an appreciable degree of literary success, having published The Pickwick Papers, Oliver Twist and Nicholas Nickleby , to increasing acclaim. Despite this growing prominence in the world of letters, he was admitted to the Inn on 6 December 1839 for a 'fine' of £4. His true intentions regarding the legal profession remain unclear, as it was nearly a decade before he even began to eat the dinners requisite for Call to the Bar, but some desire to emulate Henry Fielding, an earlier literary Middle Templar, and become a magistrate has been suggested.

On admission Dickens signed a bond - essentially a legal document, signed additionally by two supporters (or 'bondsmen') of the new member who in doing so declared that they would cover any outstanding debts owed by the member in the event of their death, withdrawal or absconding. Dickens's bondsmen were Edward Chapman, his Strand-based publisher, and Thomas Noon Talfourd, a judge and himself a Middle Templar.

An older man, Talfourd was a close friend of Dickens's for many years - and indeed The Pickwick Papers had been dedicated to him. Tommy Traddles, a character in David Copperfield, is sometimes said to have been modelled on Talfourd, and his children Kate and Frank (also a Middle Templar) are suggested to have inspired the two children so named in Nicholas Nickleby . Talfourd's portrait hangs in the Inn, just outside the entrance to the Queen's Room. 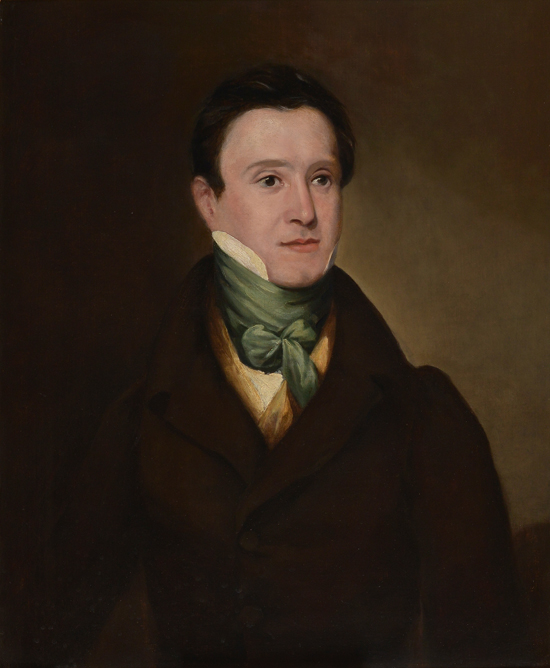 The environment of the courts, chambers and passageways of the Inns of Court undoubtedly informed many of Dickens' most atmospheric settings. Much of the action of Bleak House , for example, takes place in Lincoln's Inn and the surrounding area. Two key landmarks of the Middle Temple also feature prominently in his work. The fountain in Fountain Court, little changed now from Dickens' day, appears at an important moment in Martin Chuzzlewit, being where Westlock and Ruth meet, while Ruth's brother Tom is working in a set of chambers nearby. It is described thus: 'Merrily the fountain leaped and danced, and merrily the smiling dimples twinkled and expanded more and more, until they broke into a laugh against the basin's rim, and vanished'. Not every feature of the surrounding court was painted in such a positive light, however, as Dickens also draws attention to the 'slow vegetation of Fountain Court', the 'smoky shrubs' and the 'uncongenial pavement of the court'. 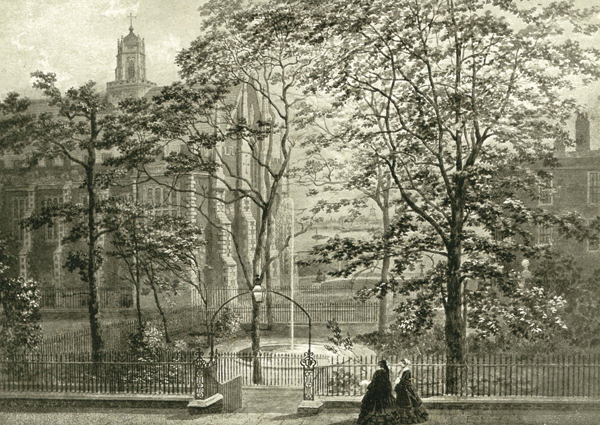 Before the construction of the Victoria Embankment in the 1860s, Middle Temple Lane led directly to the Thames via the 'Temple Stairs' - a mooring place for boats which had been present in various forms since the days of the Templars. The stairs feature prominently in Great Expectations - Pip keeps his boat here for much of the narrative, and it is from here that he and Magwitch make their nocturnal bid for escape. 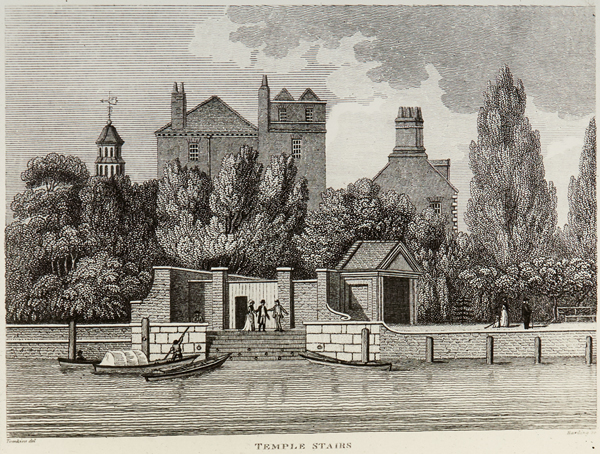 Over the course of his many years of student membership, Dickens paid his fees and duties with reasonable diligence, as is indicated by his entry in the Students' Ledger covering 1834-1852. In 1848 he paid a deposit of £100 in order to start keeping Commons (dining in the Inn), one of the primary qualifications for Call to the Bar (such newfangled innovations as examinations and lectures would not be introduced formally for another few years). The Buttery Books, which list the names of those dining in Hall, record that he dined on several occasions with Frank Talfourd, the son of his bondsman and friend Thomas. 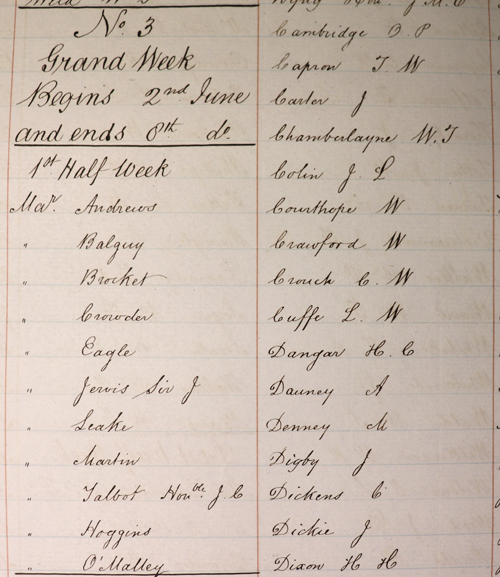 Nonetheless, in 1855 Dickens decided to withdraw from membership of the Middle Temple. By this point, of course, he had become immensely successful and world-famous, having published some of his most prominent works, including Bleak House , Hard Times , and, of course, A Christmas Carol . This latter work had been described by Dickens' fellow literary Middle Templar William Makepeace Thackeray as 'a national benefit and to every man or woman who reads it, a personal kindness'. Dickens submitted a petition to the Inn's Parliament in which he stated at that at the time of his admission 'he did not foresee that Literature as a Profession would so entirely engross his time and become the business of his life', as it of course had. He requested to withdraw from the Inn, and to have back the £100 deposit paid in 1848.

Detail from the petition of Charles Dickens to withdraw from the Inn, 1855 (MT.3/MEM/57)

Parliament met on 20 April 1855, and the petition was laid before the Benchers. It was a busy meeting - on the same evening, they discussed the dinner hour for Grand Day, ordered the polishing of the marble columns in Temple Church, and rejected the petition from the local postmen to be allowed their Christmas boxes, of which they had been deprived the previous year. Dickens, however, fared better than the unfortunate posties: his petition was granted and his deposit of £100 was returned to him - worth about £6,000 in today's money. A receipt for the sum survives in the archive, bearing his signature. 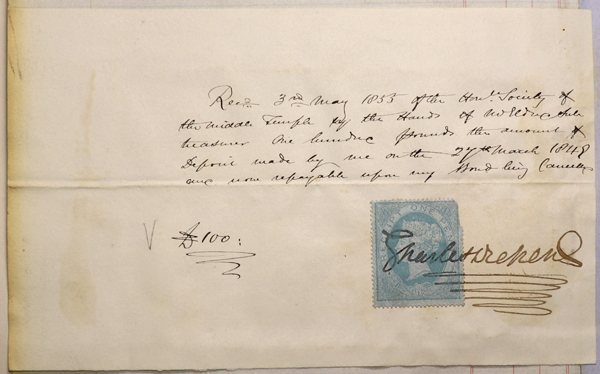 Receipt signed by Charles Dickens for the sum of £100 deposit returned to him by the Inn (MT.2/TRB/219)

Dickens' connection with the Inn is remembered to this day. In 2012, in celebration of the bicentenary of his birth, the Inn gave a dinner in the Library and staged a performance in Hall of 'The Trial of Bardell v Pickwick', which had been adapted from the original by Master Arlidge. The menu for dinner featured items taken from a book entitled 'What Shall we Have for Dinner' by Dickens' wife, including 'Doctor Marigold Pudding' and 'Olde English Foole'. The performance starred a number of legal luminaries, including Lord Clarke (the Treasurer of the day) as Pickwick, Master Paul Darling as the Foreman of the Jury, Sir Christopher Rose as Mr Justice Stareleigh and Master Arlidge as Serjeant Buzfuz. 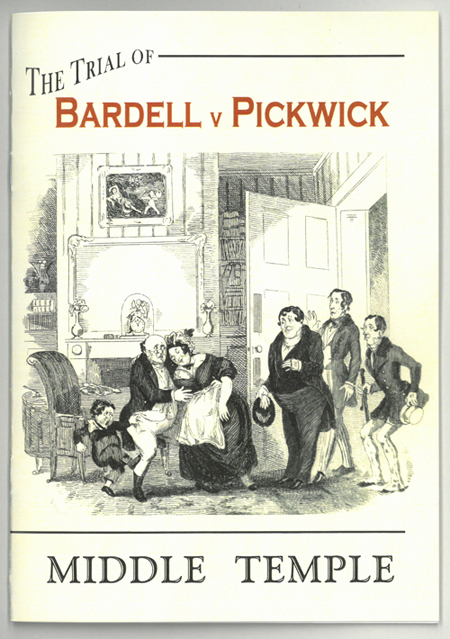 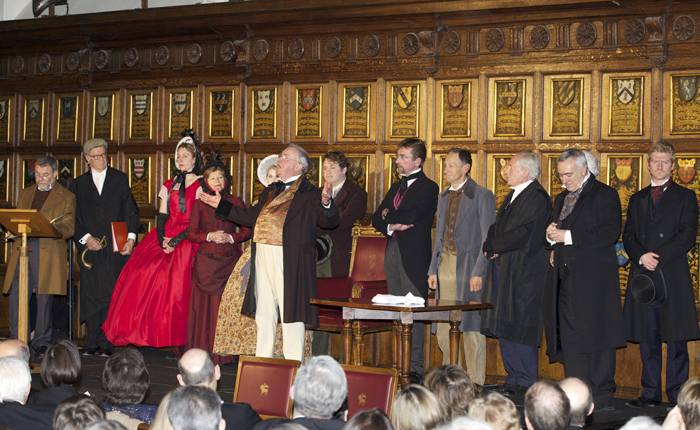 Doubtless the name of Dickens will inspire further commemorations and celebrations in the future, and continue to evoke a Middle Temple of years gone by - that world of dingy chambers and foggy courts, playful fountains and waterborne escapes, can still be remembered and felt today as one explores the precincts of the Inn.