July 2018: Balls at the Middle Temple

The Ball has for centuries been the highlight of many a social calendar, and the Inn is no exception. Music, dancing and festivity have of course, in various forms and arrangements, been present at the Inn virtually since records began, but this month we focus on the Balls given from the early twentieth to the early twenty-first centuries - from waltzing in Hall on the eve of the First World War to the uproarious 'Glastonbury in a Tuxedo' events at the turn of the millennium. 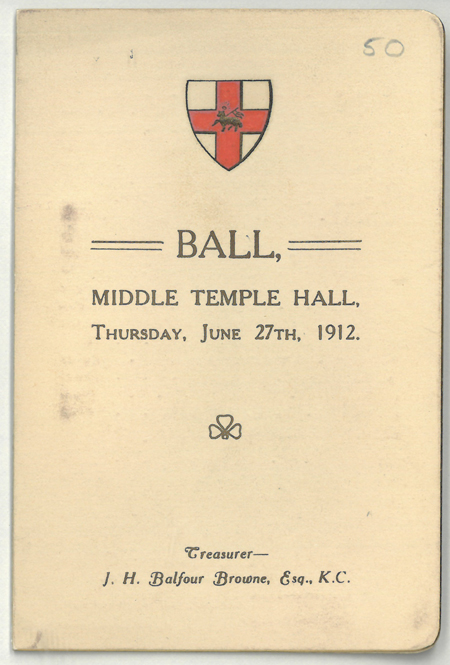 Programme of Dances for the Subscription Ball, Middle Temple, 1912 (MT.7/GDE/50)

In the summers of 1912 and 1913, 'Subscription Balls' were given at the Inn - these were events to which one would 'subscribe' by buying a set of tickets and were generally held for fundraising purposes. Summary accounts survive in the archive for these which do not indicate great success in this regard - in 1913, the Inn's expenditure on the event came to just over £394, and ticket sales raised only £319, leaving the society with a loss of around £75. To this regrettable calculation a further addition has been made in pencil, recording that once the £52 14s of the society's wine consumed was taken into account, the loss was still more considerable. 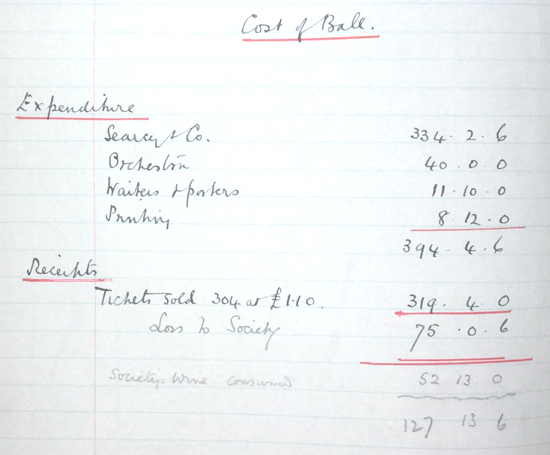 The programme for this Ball included twenty-one dances, most of which were waltzes, played by the Stroud Haxton Orchestra, and concluded with a doubtless rousing chorus of God Save the King . This particularly charming archival record still has the miniature pencil attached which was to be used to record one's 'Engagements' for each dance. 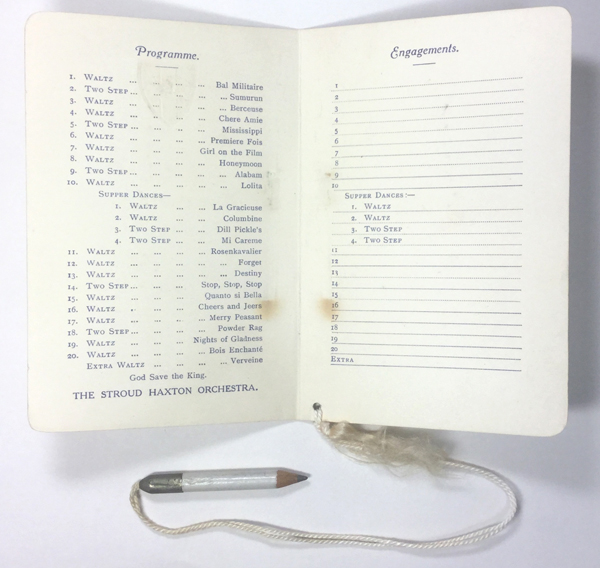 Lord Rothermere was one of the Inn's most significant benefactors - his Harmsworth Scholarship still benefits many young Middle Templars today, and his gifts of silver are well-documented. In addition to these many gifts, he also contributed the entire cost of a Ball at the Inn in 1935. This came to a total of £3,750, and covered refreshments, entertainers, flowers, servants, the hire of a grand piano and the special services of the City of London Police. 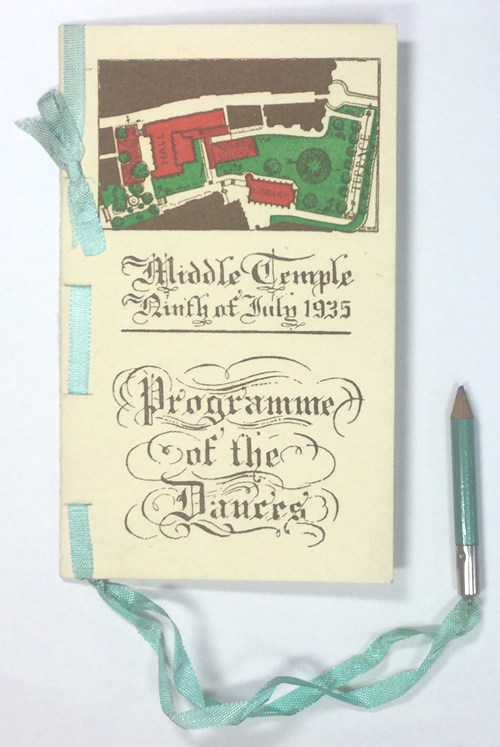 1967 saw the Inn honoured by the presence of our Royal Bencher, Queen Elizabeth the Queen Mother, at a Midsummer Ball. According to surviving promotional material, it was 'believed to be the largest Ball given by the Middle Temple in its Hall and precincts - at any rate in this century'. The dress code suggested that 'those over forty-five may prefer to wear evening dress and those under thirty-five may prefer dinner jackets'. It is unclear what those between 35 and 45 were expected to wear.

The Queen Mother arrived with her Suite at about 10.30pm, entered Hall and was seated on the dais. Things were a great success for the most part; excepting the second supper served in the library which was 'a disaster', according to the post-ball report - it was served 45 minutes late and several items were missing. 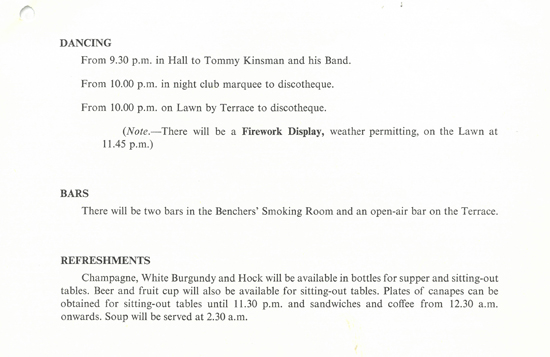 Information regarding dancing, bars and refreshments at the Midsummer Ball, 1967 (MT.7/ROY/7/40)

Middle Temple Balls have not always been confined to the precincts of the Inn. In 1970, to mark 400 years since the building of Hall, a Ball was given in Hong Kong. Held in the Grand Ballroom of the Hilton hotel, the entertainments were eclectic, featuring Scottish dancing, Spanish ballet and the services of toastmaster Sergeant McKinney of the Irish Guards. Guests dined on such thematic dishes as 'Ye olde original Blackstone Avocado with Crabmeat' and 'Saddle of Veal Plowden Style', as well as the somewhat impenetrable 'Sir Walter's Discovery'. A message from the Queen marking the occasion was delivered. 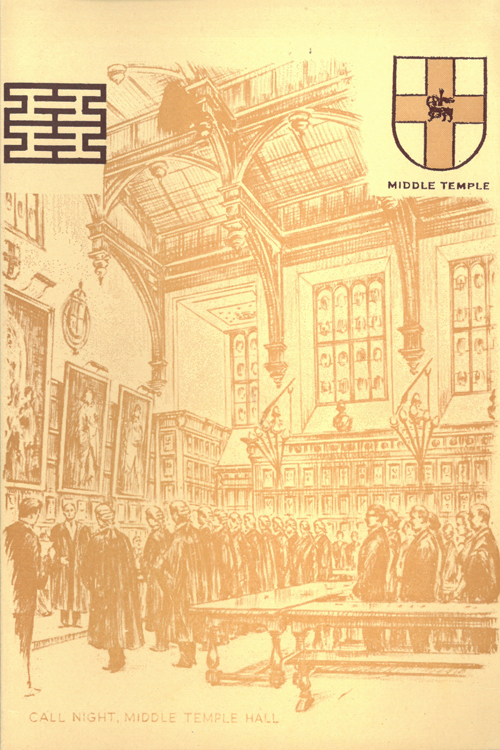 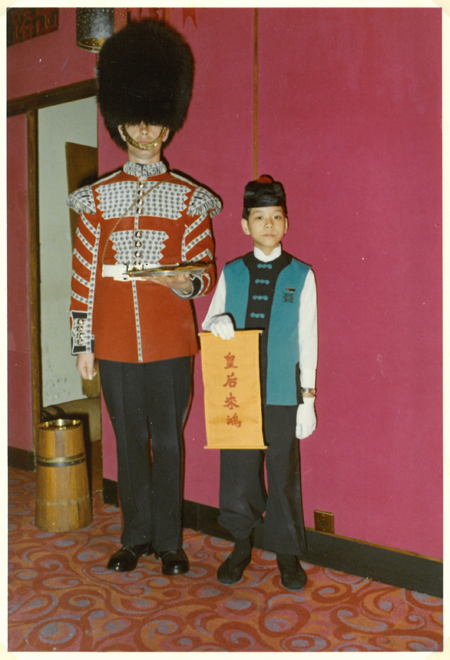 Balls continued at the Inn throughout the 1980s and 1990s, adapting with changing tastes and fashions. At the Summer Ball in 1980, a raffle was held, with an exciting range of prizes. These included a champagne lunch for two at Hodgson's, a leg of English lamb, a silk tie 'in brown, rust and pink', a Folio Society edition of The Hobbit , a pink leotard, a Zanussi dishwasher and, most intriguingly, 'Something for someone who has Everything', the last of which, records indicate, was won by the Under-Treasurer, Captain Morison. Photographs from the day of the Ball illustrate the festive decoration in Hall and the garden, and evidence strongly a red and white theme to proceedings. 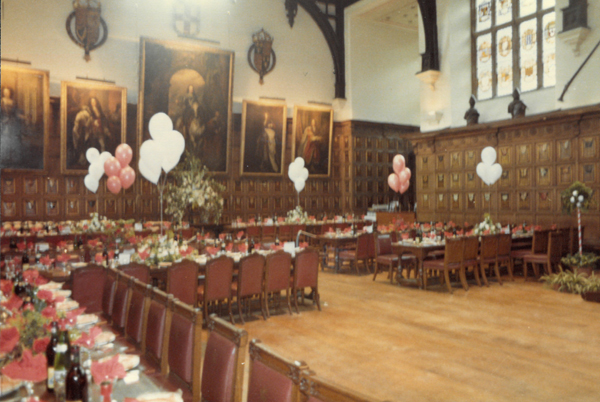 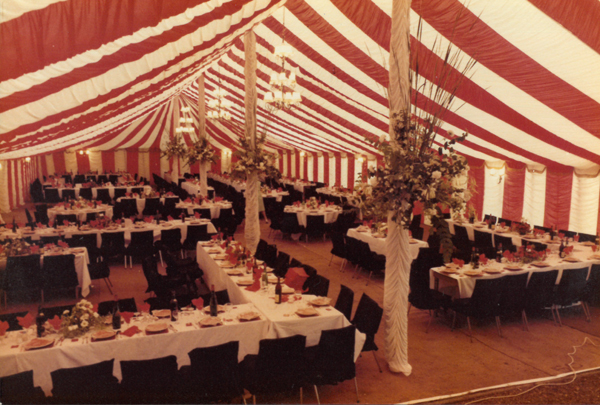 As the years went by, records indicate that the guests at these events grew ever more exuberant. The Middle Temple Students' Association Summer Ball in 1984 is a case in point - reports state that at least one library chair was broken throughout the course of the evening, and there were some strongly-worded letters of complaint. One nearby resident complained that 'The noise was so loud... it attracted certain persons who appeared to be somewhat undesirable and who, no doubt thinking that this was some form of public entertainment, attempted to climb over the Judges' Gate in order to gain entry to the Inn.' Another, kept awake for many hours, declared that it 'constituted a public nuisance', and was a 'nightmare'. 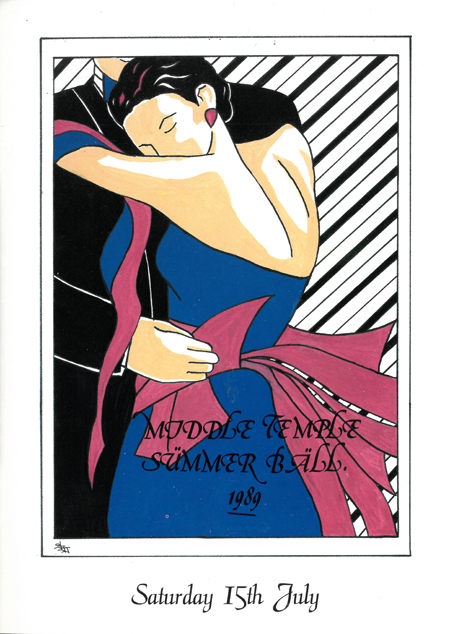 In the 1990s, three of the Inns - Middle Temple, Inner Temple and Lincoln's Inn - decided to pool their resources and hold The Inns of Court Ball, rotating the duties of host each year, and raising money for charity through ticket sales. The first, in 1993, was held at Middle Temple, and the committee, while including representatives of the other Inns, was largely made up of Middle Templars, including its chairman, Jonathan Rich. The event, attended by at least 800 guests, ran to 5.30am, with 'Reels and Dancing' promised on the ticket. 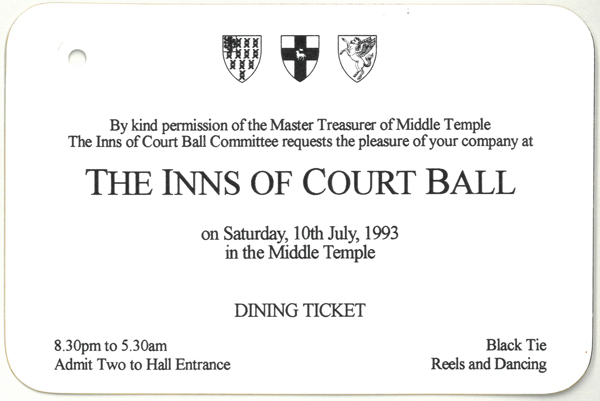 The Inns of Court Balls continued to be a hit, and in 2000, they made the national press when the Inner Temple, due to host the 2001 event, threatened to withdraw their participation, owing in a large part to the increasingly uproarious behaviour at these events. The story, which appeared in several national newspapers, saw the event described as 'Glastonbury in a Tuxedo' and reports made of 'wall to wall drinking in the main hall, with many of the barristers involved in drunken behaviour'. The Survivors' Photo from the 1999 ball, held at the Middle Temple, does not indicate any such disorder, but certainly illustrates the energy and stamina of the guests. 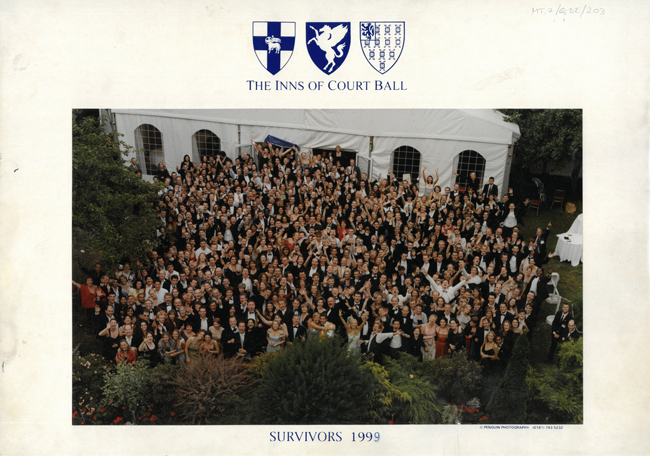 While the Inns of Court Balls did cease to exist within the next decade, in various shapes and sizes such events do continue at the Inn, such as reels and dances on Burns Night, Revels at Christmas and Students’ Association Summer and Winter Balls - thus the tradition lives on.