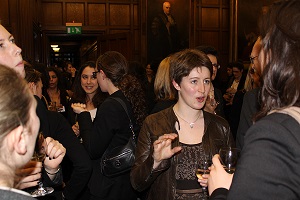 The Bar Standards Board annual trends report indicates that a very large proportion of women practitioners typically leave the Bar in mid-career.

Recognising that it could perhaps do something for its membership to sustain them through the joint challenges of career development and raising their families, Middle Temple introduced a new initiative in 2011 in support of women at the Bar.  Although the hallmark of independent practice is self-sufficiency, it was thought that the Inn could do something to help female members through the introduction of a mutual support system.

Thus, the Temple Women’s Forum – now extended to include Inner Temple – was created with the aim of inspiring and supporting female members of the Bar and Judiciary throughout the course of their careers.

The Forum manifested itself for the first time on Tuesday, 6 March 2012.  Middle Temple Hall that night was full. It had been used for over four centuries as a place for lawyers to gather, learn and support each other and, to that extent, nothing had changed. The point of difference about the Women’s Forum was that, on that evening, more women professionals were gathered in Middle Temple Hall than at any other time in its 440-year history. This was in stark contrast to a time, just 90 years ago, when someone by the pseudonym of ‘MT’, writing in the Pall Mall Gazette, asked ‘Is it really necessary that women should be allowed to invade the hall for the purpose of keeping terms?’

The Inns have wonderful space and first-class networks of members. Both will be used as a catalyst to bring women practitioners together for mutual support. The Forum provides a meeting place to focus together on some of the key issues identified as contributing to the decision of many women to leave the profession in the prime of their careers.

After each keynote speech, the Forum meetings include an opportunity to debate a matter of significance for women members of the Bar (e.g. the role of the clerks), and then after the formal part of the evening, drinks are served and attendees have a chance to network.

The Temple Women’s Forum is not exclusive: members of Middle and Inner Temple are encouraged to bring a guest - male or female, practitioner, judge, head of chambers, clerk or other colleague.  The event is free, but registration is essential.