This month, to mark Her Majesty the Queen’s official birthday we’re looking at records and artefacts relating to royalty in the Inn’s collections. A wealth of fascinating material relating to the Kings and Queens of England, Scotland and the United Kingdom - and their families - lies within the archive and throughout the historic collections, reflecting the Inn’s well-established royal connections.

One of the earliest royal records in the archive is also one of the most important in the history of the Inn: the Letters Patent, sealed by James I in 1608, conveying the land on which the Middle Temple and the Inner Temple lie to the two societies. Beforehand, the land had been rented from the Crown by the two Inns, but James handed it over in perpetuity, to be held in trust by certain Benchers, provided that legal education and the accommodation of lawyers were continued, and that Temple Church and its Master were well-maintained. In 2008 Her Majesty Queen Elizabeth II marked the 400th anniversary of James’ charter by sealing new letters patent confirming the earlier document. 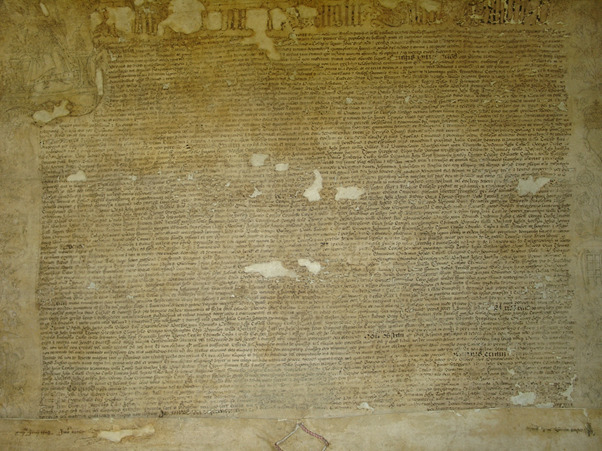 Letters Patent under the Great Seal granting the land of the Temple to the two Inns (MT.4/JAS/1)

James’ son, Charles I, was often in communication with the Inn, and a number of his letters are kept in the archive. Notably, in March 1631, he sent a somewhat disgruntled missive, admonishing the Bench for their failure to observe Lent properly. He demanded obedience to a recent proclamation for the ‘due observation of Lent and for restraint of killing and eating of fleshe during the same’, and noted that at the Inn the Lent Readings had ‘of late growne to an excesse of entertainment and Charge, much beyond that of former tymes, which we wish reformed’.

Letter from Charles I concerning the observation of Lent (MT.1/SMC/2)

While Queen Victoria did not maintain a strong personal connection with the Middle Temple, significant occasions in her reign were often marked at the Inn, though not necessarily in her early years as Queen. In the weeks leading up to Victoria’s marriage to Prince Albert, an anonymous Middle Templar wrote to the Bench to express the hope that they would not repeat their ‘discreditable “doings” at the time of the last Coronation’ – the Inn, presumably, having failed adequately to mark Victoria’s coronation - characterised by ‘one & all of its members as arising out of an ignoble and selfish feeling and manifesting too great a degree of political and partisan spirit, if not of disloyalty itself’. Things had certainly improved by 1897, when the Inn marked Victoria’s Diamond Jubilee with a grand dinner. 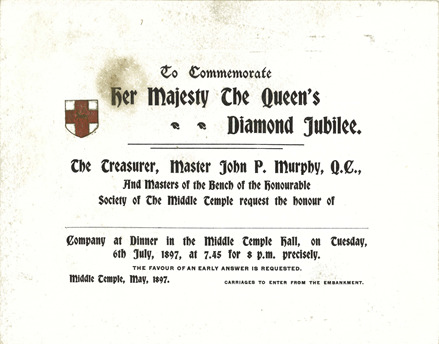 The Inn had a close relationship with Victoria’s eldest son Albert Edward, particularly when he was Prince of Wales. He was made the Inn’s first Royal Bencher in 1861, and on the same day he opened the newly built Library. This opulent occasion involved a procession, a dinner in Hall, and a concert. He maintained his connection with the Inn, dining on a number of occasions. One anecdote relates that after dinner one Grand Day the Prince lit a cigar, forcing the Bench to alter the rules at the earliest possible moment to permit smoking at High Table on Grand Day. The future King Edward VII also served as Treasurer in 1866. 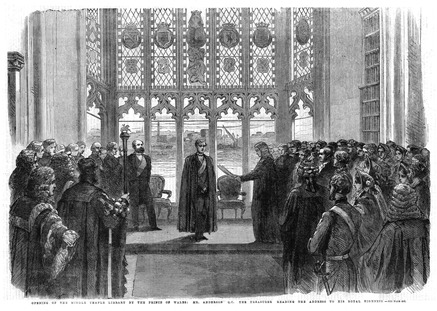 One of the prizes of the Inn’s Silver collection is the ‘Three Kings Mazer’, a bowl produced by the master silversmith Omar Ramsden and given to the Middle Temple by Lord Rothermere, benefactor of the Inn, in the late 1930s. Made in 1937, it bears the heads of George V, Edward VIII and George VI, all of whom were King of England in 1936, as well as those of Queen Mary, wife of George V, Queen Elizabeth, wife of George VI, and the latter couple's daughters, Princess Elizabeth and Princess Margaret. 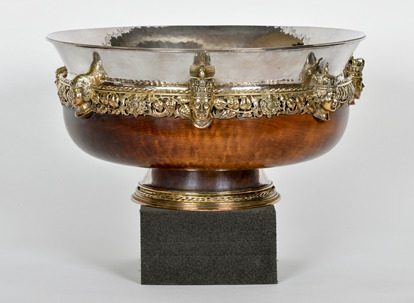 Queen Elizabeth, later known as the Queen Mother, was made a Royal Bencher in 1944, and was particularly active in this role. She dined regularly, particularly at Grand Days and at the ‘Family Dinner’, as well as attending performances and ceremonies here. In 1965 she sent a telegram to the Bench thanking them for their birthday wishes. Her last visit to the Inn was just a few months before her death, attending a Family Night dinner in December 2001. 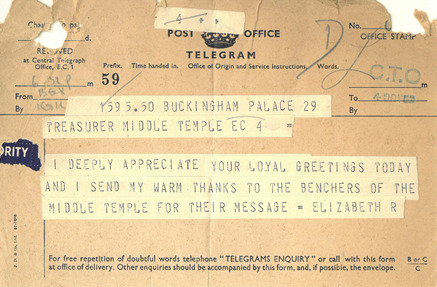 Telegram from the Queen thanking the Bench for their birthday wishes (MT.7/ROY/68)