Middle Temple Hall is probably the finest example of an Elizabethan Hall in London. 101 feet long and 41 feet wide, it is spanned by a magnificent double hammer-beam roof. Begun in 1562 when Edmund Plowden, the famous law reporter, was Treasurer of the Inn, it has remained little altered to the present day.

The oil paintings above the Bench Table are of Queen Elizabeth I; Charles I in the style of Van Dyck; Charles II attributed to Sir Godfrey Kneller; James II and, all in coronation robes, William III, Queen Anne and George I. In the windows are memorials to other notable people associated with the Inn: Edward VII who was Treasurer in 1887; the Duke of Windsor, made a Bencher in July 1919; Sir Walter Raleigh; Edward Osborne, Lord Mayor in 1583; Ferdinand, 5th Earl of Derby (Amyntas of Spenser’s poem Colin Clouts Come Home Again); and 11 Lord Chancellors and Keepers of the Great Seal, 24 Chief Justices, 10 Masters of the Rolls and 9 Chief Barons of the Exchequer.

High Table consists of four 29-foot planks of a single oak, reputedly a gift from Elizabeth I to the Middle Temple, cut down in Windsor Forest and floated down the Thames to be installed in Hall before the building was completed. The Benchers of the Inn still dine at it as they did that evening in August 1586 when Francis Drake, just back from a successful expedition against the Spanish Indies and bringing back to England with him Raleigh’s Roanoke colonists, was rapturously congratulated by Benchers and members. According to tradition the hatch cover of his ship the Golden Hind was later used to make the present ‘cupboard’, a table which stands below the Bench table and which replaced a much earlier one. 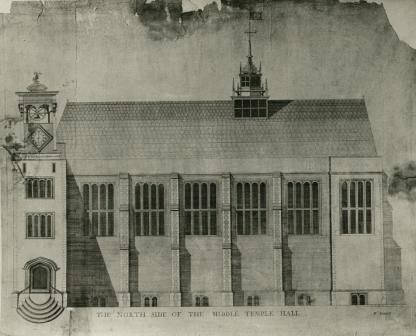 Since medieval times the cupboard has been the centre of ceremonies. On it is laid the book which members sign when they are called to the Bar and by it stood the Readers when each Lent and Autumn they gave their lectures. These Readings were originally intended to teach young members the law. The Readers’ coats of arms, which can be seen on the wood panelling, date from 1597. The earliest is that of Richard Swayne. Other early ones are those of Richard Lane, Keeper of the Great Seal to Charles I and William Montagu, Chief Baron of the Exchequer. If a Reader had no coat of arms he applied for one to be created. Alexander Staples took three staples sable, John Delafont a fountain playing into a basin, John Viney a bunch of grapes and Robert Sowler three shoe soles.

At the other end of the Hall from the cupboard is the splendid, elaborately carved screen made in 1574. Extensively damaged during World War II, it has been so well repaired that the joins cannot be seen. Either side of the white marble bust of Edmund Plowden in the centre of the screen are two double-leaved doors added in 1671 to assert the authority of the Inn after some young members had occupied the Hall without permission and ‘kept Christmas’ for several weeks.

The Hall, however, is not just an historic relic. It is the centre of the life of the Inn today. Bench, Bar and Students meet here daily at lunch, and in the evenings during dining terms. Here are held not only the student moots, but all the great functions and meetings of the 21st century Middle Temple and Bar.